From anti-war marches in the 1960s to the Tea Party rallies of 2010 and the almost-nonstop progressive protests in 2018, marching in the streets has been a fixture of modern American life.

But do protests actually accomplish anything in terms of election results or the balance of party power? 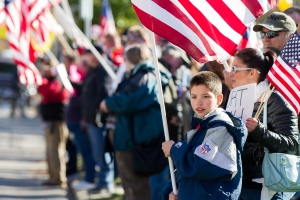 Absolutely yes, according to a new study based on 30 years of data.

Co-authored by Sarah A. Soule at the Stanford Graduate School of Business and Daniel Q. Gillion at the University of Pennsylvania, the study finds that spikes in both liberal and conservative protest activity can increase or decrease a candidate’s vote by enough to change the final outcome.

“Many people are skeptical that protests matter to electoral outcomes, but our paper finds that they have a profound effect on voter behavior,” says Soule. “Liberal protests lead Democrats to vote on the issues that resonate for them, and conservative protests lead Republicans to do the same. It happens on both sides of the ideological spectrum.”

On top of that, big protests by progressives have spurred increases in the quality of Democrats who decide to challenge incumbents. (Conservative protests haven’t had the same impact motivating Republican challengers, however.) That seems to be what has happened in 2018, when record numbers of women both marched in the streets and decided to run as Democrats for Congress, but the pattern isn’t unique to this year.

The study is based on a detailed analysis of both local protest activity and voting patterns in every congressional election from 1960 to 1990. The data on protests came from news reports. Soule and Gillion focused only on local protests, which they scored by both their ideological leaning and their intensity or “salience.”

To rate the protests on an ideological spectrum, the researchers looked at each protest’s focal issues. Not surprisingly, given the anti-war and civil rights movements of the 1960s and 1970s, 90 percent of the protests during those decades were on the left side of the political spectrum. But the share of conservative protests increased gradually to 14 percent in the ’80s and 21 percent by 1990.

To rate “salience,’’ Soule and Gillion looked at whether the protests attracted large numbers of people; had organizational backing; attracted police presence; or resulted in damage, injuries, or death.

For example, in the 1968 election of Abner Mikva, a liberal challenger in Illinois, the district saw 40 protests that year, which were scored at a salience level of 54—fairly high, but nowhere near as high as the protests during some other races. Mikva defeated both the Democratic incumbent in the primary and his Republican opponent in the general election.

Interestingly, conservative protests of similar intensity appear to give Republicans a proportionately bigger boost in vote share. Soule and Gillion say that probably reflects the fact that conservative street protests were rare until the 1990s, which probably made them more electrifying to Republican voters.

The researchers argue that local political protests provide important signals to voters as well as to candidates and potential challengers. For voters, they can focus attention. To incumbent lawmakers, they are signals about intensity of local content or discontent. For prospective challengers, they can signal the incumbent’s vulnerability. Indeed, the odds of a solid challenger (such as someone who has held elected offices before) entering a congressional race climbed from 20 to 50 percent as the intensity of protest activity increased.

“It’s a form of information-gathering,” Gillion says. “When politicians run for office, they try to know every single issue in their backyard as well as the sentiments of their constituents. Protests are a way of signaling discontent, and they inform politicians about the most salient issues.”

Gillion adds that the volume and intensity of progressive protests have been higher in 2018 than at any time since the late 1960s.

Other studies, including a new one by Robb Willer of Stanford, find that violent protests can lead people to think poorly of the protesters. However, Soule and Gillion say they found little evidence that protests produce a backlash in actual voting behavior.

Has it been enough to affect the 2018 midterm elections?

“Based on these findings, unequivocally, yes,” says Soule.

This article was originally published on the Stanford Graduate School of Business. Read the original article.