Empathy is our ability to feel the feelings and take the perspective of someone who’s in a different situation than we are. Could children who are different from their parents—like children born to parents with disabilities—grow up to be more empathic?

Researchers at Israel’s Bar Ilan University recently studied families with parents who had an auditory or visual disability, such as blindness or deafness, and children who did not have their parents’ impairment. They found that these school-age children and adolescents were higher in certain emotional skills, compared to the progeny of adults without a disability. 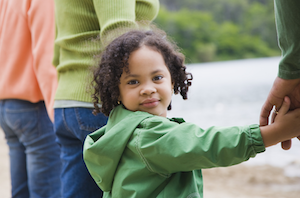 “When a parent has a disability, it affects the entire family, yet the literature focuses mostly on the negative impact of disabled parents on their children, ignoring positive aspects,” the researchers write.

The researchers recruited 77 students, ages seven to 17. Forty children had parents without sensory disabilities, and 37 of them had parents with impairments. The scientists gave questionnaires to the children and adolescents, as well as conducting separate interviews with the kids. The adults answered questionnaires over the Internet and via email.

In the questionnaires, empathy was reflected in statements like “I feel sad when I see a girl who has no one to play with.” Emotional literacy—the ability to understand one’s own feelings, listen to and understand those of others, and effectively express emotions—included beliefs like “When I am sad, I know why I feel that way.”

Ultimately, the researchers found that children whose parents had a sensory disability showed higher empathy and emotional awareness of others than the rest of the children.

This mutual comprehension allows the parents to accept their child’s assistance and the child to take on unique responsibilities—such as interpreting for her parents, helping with transportation, and literally serving as their eyes and ears—that bolster her empathy and emotional literacy. In past research, parents with visual disabilities have reported that their children are also more compassionate, verbal, mature, and accepting of differences in other people.

Similarly, in interviews in a prior study, adult children of parents with a visual or hearing disability also reported benefits, including “a great deal of maturity, sensitivity to others and a wide range of life experiences, and a sense that their family experience had developed and encouraged their empathy with others,” the researchers write.

The authors caution that further research needs to be done, particularly given the small number of participants in this study. For example, they note, some previously published research found that children of disabled parents sometimes take on too much responsibility and don’t necessarily thrive emotionally under the pressure. Adolescents in a 2009 study “stressed that they were not happy with the role of interpreting for their parents and yet they could not do otherwise because there was no other option.”

Overall, the Israeli researchers’ work shows a positive response to difference: the development of empathy and emotional literacy. It’s a response that we can only hope will become a model for our diverse yet divided generation, one family at a time.