Research has shown that when adults see someone else getting hurt, their brain responds as if they themselves are suffering—compelling evidence for the deep roots of human empathy. Now, a new study indicates that children’s brains react in much the same way, suggesting that the roots of empathy may even be innate.

In the study, Jean Decety, a professor of psychology at the University of Chicago, and colleagues showed a sequence of images to children between the ages of seven and 12 while the kids’ brains were being scanned in an MRI machine. The sequences showed people’s hands or feet, but not their faces. In some of the sequences, pain was inflicted on the limbs, either accidentally (for example, a person dropping a heavy bowl on his own hand) or on purpose (such as someone else intentionally stepping on the person’s foot). 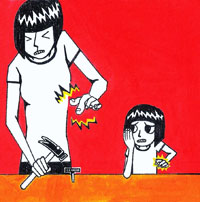 The results, published in the September issue of Neuropsychologia, demonstrated that when children saw other people in pain, their brains became active in the same regions that process the experience of pain first-hand—evidence, says Decety, that the kids were naturally in tune with the people they were watching. “These results tell us that children are wired for empathic understanding,” he says.

What’s more, the children’s overall brain activity differed depending on whether the pain was inflicted intentionally or accidentally. When the pain was inflicted intentionally, areas of the brain thought to be involved in moral reasoning were also activated, suggesting that the children were not only empathizing with the injured individual, but were trying to understand why one person would want to harm the other. Indeed, in post-scan interviews, Decety found that the children “indicated that they thought these situations were unfair and asked why they had occurred.”

In a follow-up study, recently published in Biological Psychology, Decety observed the brain activity of adolescent males who had been diagnosed with aggressive conduct disorder and had intentionally inflicted pain on others. When these boys watched videos of a person hurting someone else, their brains showed activity in areas associated with reward processing, suggesting that they may actually enjoy seeing other people being hurt. According to Decety, such insights into empathic and bullying behavior may help identify strategies for treating children with aggressive tendencies.