We associate good relationships with sexuality, assuming quite naturally that happy couples have sex more often than their miserable counterparts. But have you ever considered just what it is about sex that makes it so beneficial to a couple’s relationship?

A new and extremely well-conducted investigation by Anik Debrot and her colleagues points to the surprising role not of the sex itself, but of the affection that accompanies sexuality between partners. Over a series of four separate studies, Debrot and her fellow researchers were able to pinpoint the way that everyday kissing, hugging, and touch between partners contribute uniquely to relationship satisfaction and overall well-being. 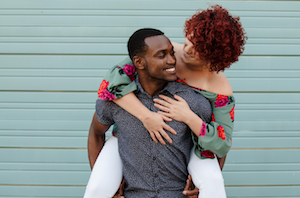 Let’s break this sex-happiness equation down for a moment before looking at the details of the study: The researchers began with the well-established finding that individuals experience higher levels of well-being when they have an active and satisfying sex life. As they noted, the results of previous research demonstrated that “the size of the difference in well-being for people having sex once a week, compared with those having sex less than once a month, was greater than the size of the difference in well-being for those making US$75,000 compared with US$25,000 a year.”

Is it the sex itself or something about sexual activity that is so good for our happiness? You might argue that people who are happier are more likely to have sex more often, because they’re in a good relationship and are satisfied with it. The good sex, then, would simply follow the good relationship dynamics. It’s also possible that people who are more positive in general are more likely to get involved in a close relationship which, in turn, benefits their well-being. Such a cyclical process would imply that the happy just get happier.

The authors believed that the key ingredient in the sex-happiness relationship is positive emotion. As they note, however, it’s extremely difficult to examine this possibility through the typical questionnaire method, which is subject to memory bias, or in the lab, where the situation is artificial. Instead, the fourth, and most telling, of their studies used a daily diary method. The researchers gave the participants smartphones to use for recording their responses, all of which were collected over the course of two weeks when the participants periodically received signals from the phone to complete the assessment. The participants were 58 heterosexual couples averaging 25 years of age and in a relationship, on average, for four years.

A previous study in the series, analyzing daily diary reports from a larger and somewhat more diverse sample (working parents), showed that people rated their positive emotions higher when they indicated they had had sex in the previous 24 hours. The impact of sex on happiness was accounted for, in large part, by increases in affection linked to prior sexual activity. For this smartphone-based study, which asked only about sexual activity and affectionate moments, participants simply answered whether they’d had sex since the last report, and whether they’d engaged in a “moment of love and affection” with their partner.

In that fourth study, researchers tracked the daily course of sex and affection. This allowed them to study the effects of sex on Day 1 with affection on Day 2, and vice versa, over the entire course of the study period. The results confirmed the study’s hypothesis that, across days of the study, sex predicts affection and affection, in turn, predicts sexual activity. The study can’t prove causation because participants weren’t assigned to experimental groups of sex/no sex or affection/no affection. But given that such a study would be practically impossible to conduct and likely produce artificial results, the analytic strategy used by the researchers provides as strong evidence as is possible of the sex-affection link.

As the authors concluded, “Sex seems not only beneficial because of its physiological or hedonic effects…but because it promotes a stronger and more positive connection with the partner.”

Over time, such experiences build to strengthen the bonds between partners, meaning that their long-term relationship satisfaction is bolstered as well. These effects extend to the experience of one’s partner because, as shown when partners’ responses were analyzed in terms of their effects on each other, “when one person draws emotional benefits from sex, their partner’s relationship satisfaction is also promoted over time.”

If affection is so important to personal and relationship satisfaction, one intriguing question raised by this study is whether it can replace sexual activity when couples lessen the frequency of having sex due to external factors. People may decrease their sexual activity as they get older due to physical changes, and couples who have recently had children may similarly have sex less often. But as long as such couples maintain their affection toward each other, they can offset the potentially negative effects of lowered sexual activity. Conversely, for couples who feel they’re drifting apart and are therefore having sex less often, if they work on their physical affection toward each other, their sexual relationship may become reestablished as well.

To sum up, fulfillment in relationships depends on many factors, of which the physical nature of the interaction is just one. This study shows that the physical basis for a couple’s interactions with each other does play a surprisingly strong and powerful role.

This article was originally published on Psychology Today. Read the original article.