When we think of powerful people from history, we often think of negative examples—like Hitler, Mussolini, or Stalin. The idea that power is bad can be summed up by the saying, “Power corrupts and absolute power corrupts absolutely.” 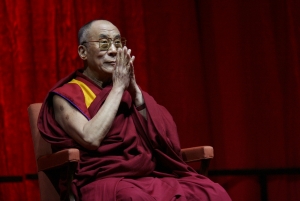 But power also has a positive side, especially when it’s wielded in the service of humanity. Think of Martin Luther King Jr. or Mahatma Gandhi. Though both men embraced their personal power, they directed it in a way to further humanitarian causes. And they did so with great love.

How can we, too, find our power while still remaining caring and compassionate? This is the subject of the new book Power and Care. A compendium of conversations between several prominent researchers and the Dalai Lama, the book makes the case for integrating compassion and virtuous power in everyday life and using power wisely to solve world problems.

These conversations originally took place at the Dalai Lama’s residence in Dharamsala, India, where scientists have regularly gathered since 1987 to discuss insights from their research and find common ground with Buddhism. Like other books that have sprung from these conversations, Power and Care can be a bit hard to read, as it literally is an edited version of dialogues without a linear narrative. Nevertheless, the presenters—among them primatologists Sarah Blaffer Hrdy and Frans de Waal and neuroscientist Tania Singer—help us understand the research on power and how to wield power for a better life and a better world.

The good and the bad of power

In the book, one featured researcher, psychologist Alexandra Freund, explains the dual nature of power based on the science of power. On the one hand, having power can decrease our ability to take another’s perspective and lessen our compassionate care. This can lead us to objectify others and think of them only as a means to benefit ourselves.

On the other hand, having power also makes us feel less distressed in social situations and more resilient if we are rejected. It also can make us more attuned to others—if we have a kind and helpful orientation in the first place—and make us feel more authentic, attract friends, and, of course, have influence.

So we don’t need to eschew power entirely, says Freund. “The goal is not to move away from the power motive but to instead embrace the power we carry in us and in the positions we take, and use it for a more caring and compassionate world.”

The idea of balancing power and care is important, argues Richard Schwarz, a psychiatrist at Harvard—because even care can become extreme. People may be overwhelmed by caring too much, or even become victims if they can’t stand up for themselves. He points to a study involving rheumatoid arthritis patients, many of whom were Irish Catholic women and raised to be selfless. Once they learned to better care for themselves, they were able to find more balance in their lives and their pain improved.

If we balance power and care, argues economist Dennis Snower, we don’t have to choose between helping others or helping ourselves. We are more likely to be altruistic and not do things for others only when they benefit us. He argues that the drive to care is even more powerful than other things that might influence our decisions to help or cooperate with others, like how we’re raised or our rational calculations.

What increases care and compassion?

We can strengthen our drive to care—and take steps toward solving problems like world hunger or the contested status of refugees, Snower says—by spending time among people in very difficult circumstances, learning their perspectives, and strengthening our sense of shared humanity.

Caring “enables us to benefit from helping others, even when they reside beyond our national, cultural, and religious boundaries,” he says.

Neuroscience research from Tania Singer and her team at the Max Planck Institute in Germany also sheds light on how to nurture our compassionate instincts. There, they’ve conducted longitudinal studies comparing the effects of different mindfulness practices focused on presence and attention, compassion and care, and perspective taking. 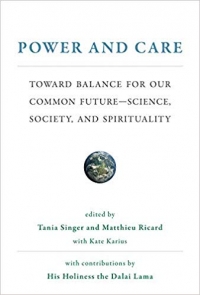 Power and Care: Toward Balance for Our Common Future―Science, Society, and Spirituality (The MIT Press, 2019, 224 pages)

One of their findings suggests that practices specifically aimed at increasing compassion—such as loving-kindness meditation and a partnered meditation practice—increase altruistic care for others the most. After completing these practices, participants not only felt more compassion in response to seeing others suffer, but exhibited changes in their brains tied to increased empathy and compassion.

“This altruistic behavior emerged most strongly out of the quality of opening the heart,” Singer says.

But she also mentions that people have more trouble accessing compassionate feelings than learning presence, which almost everyone in her study was able to do. This I found surprising—but not the Dalai Lama. In Buddhist thought, presence and perspective-taking are preconditions for developing more compassion, he says, because they allow us to better maintain peace of mind, be less attached to outcomes, and have a greater understanding of the worth of all people.

In addition to the scientists, we also hear from leaders of organizations trying to balance power and care to sow peace or transform workplaces into more caring and compassionate places. For example, Jody Williams describes the work of PeaceJam, which brings Nobel Peace Prize Laureates together with youth to inspire activism for positive change. Frédéric Laloux talks about a home nursing organization, Buurtzorg, started by nurses tired of being forced to give subpar care to save their employers money. Once they leveraged their sense of connection, purpose, and shared power, the nurses reorganized their services so they could connect better with patients, increasing patient well-being while decreasing health care costs.

While the book may not be for everyone, those who are interested in how Buddhist principles and the science of compassion and power overlap—or what a spiritual leader might contribute to scientific thinking—will find it an entertaining read. The book provides at least some idea of how we might find a way to balance power and care, for the sake of humanity.

“The time has come to not have a sense of competition, but to harmonize, work together, and share with each other—to have compassion,” says the Dalai Lama. “This is what we need for our own survival.”