How are altruism and business connected? 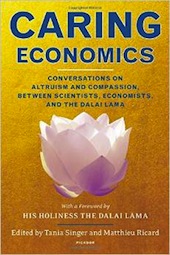 That question is at the heart of a new book, Caring Economics: Conversations on Altruism and Compassion, Between Scientists, Economists, and the Dalai Lama, edited by a neuroscientist, Tania Singer, and Buddhist monk Mattheiu Ricard. As the subtitle implies, the book is a record of conversations between the Dalai Lama and a group of scientists exploring the intersection of these seemingly disparate areas of study.

One may wonder why economists are meeting with the Dalai Lama at all. Some years ago, the Mind and Life Institute began creating opportunities for scientists from different disciplines to meet with the Buddhist leader as part of a series of informal talks, allowing them to share advances in scientific research while gaining perspective from him on Buddhist philosophy and thought. Past meetings have kick-started research in neuroscience, cognitive science, and physics, and have helped form new areas of collaboration—such as the study of Buddhist meditation’s effects on the brain.

This latest meeting in the series, chronicled in the book, focuses mostly on altruism research—what it says about human nature and how altruism affects economic decision-making.

According to many of the scientists present, altruism is a natural, spontaneous human behavior that can be nurtured (or discouraged) in various ways. And, when it comes to business, they argue, understanding what drives pro-social behavior can be important for creating the right economic policies or circumstances to augment altruism in society.

Altruism researcher Dan Batson starts the conversation by explaining how his research shows that altruism is not merely motivated by self-preservation or the need to assuage guilt, as others sometimes argue. Experiments in his lab have shown that people who are primed to think empathically toward others choose more often than not to act altruistically—for example, volunteering to change places with another research participant who is being subjected to painful shocks, even if they are given an opportunity to escape the situation altogether.

The neuroscientists Tania Singer and Richie Davison agree that altruism is natural, and also trainable. Their experiments have shown that people who undergo even short periods of compassion training—30 minutes a day for two weeks—report feeling noticeably more concern for others and have measurable, corresponding changes in their brains.

Yet altruism has been traditionally left out of the equation when it comes to economic theory. “It is not from the benevolence of the butcher, the brewer, or the baker that we expect our dinner, but from their regard to their own self-interest,” wrote Adam Smith, the “father” of modern economics.

But social economist Ernst Fehr argues that this economic axiom misrepresents human nature, because, when it comes to making economic decisions, altruism does play a role. He has used economic games to test this theory.

In experiments where participants are given a choice to keep money or to give up some so that it can be redistributed more equitably among players, people will usually choose to give up some money for redistribution, even without face-to-face contact with other players. However, if there are “freeloaders”—those who act selfishly and don’t give in kind—among the players, altruism breaks down.

“We need the right social norms, the right education,” he says. “Then, in combination with sanctioning opportunities, we can generate valuable public goods.”

Richard Lanyard, a British economist, weighs into the argument by talking about how happiness is not related as much to income (beyond a certain basic income level, that is) as it is to human relationships, a sense of trust, and cooperation—or, our “internal economics.” He argues that income disparity in a society decreases happiness levels overall, and that countries should use societal happiness levels, rather than the GNP, to decide whether or not the economy is working well.

“The problem is that so many of the things that are most important for human happiness come through relationships that are not conducted in the marketplace, “ he says.

William Harbaugh, who studies charitable giving, argues that as a society gets larger and more diverse, it’s less likely that people will step up for each other and give, because there is a sense that someone else will take care of whoever needs help. He feels that social scientists have to increase the public’s awareness of how good it feels to give in order to incentivize people to give more.

Beyond these and other academicians’ presentations to the Dalai Lama, we hear from people “in the field,” like Antoinette Hunziker-Ebneter, who runs an investment firm, Arthur Vayloyan, who does micro-financing in developing countries, and Sanjit “Bunker” Roy, who created a college that trains village women to become solar engineers. Although each comes from very different worlds, it is clear that all of them are putting altruism to the test, finding ways to encourage more equitable opportunities and financial stability for those in need.

The main benefit of reading a book like this is in “being there” for the conversations and hearing how one person’s work in this area builds upon another’s. It’s fun to hear the Dalai Lama’s insightful questions and to see how Buddhist thought dovetails with many of the researchers’ findings. Reading about the breadth of the altruism research and how it is gaining a foothold among economists, it’s tempting to re-imagine an economic system based on the human need for connection that would encourage a fairer distribution of income and more opportunities for all.

But one wonders how a faraway conversation in India with a sympathetic audience will translate into action. There is still a lot of disagreement, even among the researchers in this book, about how altruism and economics intersect and what must happen for positive change to occur. While some argue about systemic changes, others say that change must come from within, through practices like meditation.

“Part of the problem for us, culturally, is that we lead lives of distraction, and we are involved so deeply in our external economics that we don’t have time to observe our internal economics,” says John Dunne.

It may be that we will need to see a lot more people concentrating on “internal economics” before there will be any lasting change.