Imagine you lost your wallet on the street. Do you think the person who found it would try to return it to you or just keep the money for themselves? 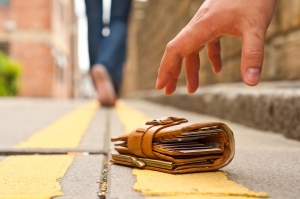 If you’re like most (or if you’re an economist), you probably think people would keep a wallet full of cash—after all, “Finders keepers, losers weepers,” as they say. But, according to a new study, you would be wrong—because you aren’t accounting for the psychological motives that promote honest behavior.

In this study, published in Science, researchers employed collaborators in over 350 cities around the world to pose as tourists. They entered public places (like post offices, police stations, and museums), turned in a “found” wallet to an official working there, and left quickly, saying that they hoped the official could take care of finding the owner.

Each wallet contained a clear ID with an email address, a grocery list written in the local language (suggesting the owner lived locally), a key, and either no money or a small amount of money (equivalent to about $13). Researchers waited to see whether the wallet recipients contacted the fictitious owners’ email—and if the presence of money made a difference.

What they found surprised them: In almost every country studied, people made more effort to return wallets with money than wallets without money. In fact, when the researchers repeated the experiment with a lot more money at stake (about $100), it only made people more likely to return the wallets.

“In this naturalistic test, with real money on the line and nobody observing their behavior, people have moral concerns that come into play that outweigh the material benefits you’d get from keeping the wallet,” says David Tannenbaum of the University of Utah, one of the study’s coauthors. “Doing a big cross-country study like this and getting a consistent result suggests that you might be tapping into something that’s really deep about the human condition.”

The researchers considered a couple of explanations for why people were honest.

Perhaps people were afraid of getting caught keeping the wallets and being punished; or perhaps they expected a bigger finder’s fee for a wallet with some money in it. But neither of these explanations panned out when tested. So the researchers tried one more test.

“If you hold everything else constant, then the fact that a person is more apt to return a wallet with a key versus no key inside is a reflection of compassion or a sense of altruism,” says Tannenbaum.

By conducting a survey, he and his colleagues also found that people believe keeping a found wallet containing money is like stealing—and the more money in it, the more it feels like stealing. Humans have a strong need to protect their self-image as honest, moral people, says Tannenbaum, and that might also play a role in their choice. People are less likely to engage in dishonest behavior that conflicts with their sense of self.

So, it seems that people return lost wallets with money both to preserve their moral identity and because they are altruistic—a finding that’s important for us as a society to know.

“People have the wrong mental model about what drives honest behavior,” he says. “If you highlight to people how their behavior might have a negative consequence on someone else, it’s likely that will have a meaningful impact on their behavior.”

For example, one recent study found that when doctors were told about patients who’d died from narcotics overdoses, they were less inclined to prescribe opioids to their future patients. In another study, doctors were more apt to wash their hands regularly when they were warned of the risks for infecting their patients, instead of the risks to themselves. Appealing to people’s better natures does seem to work.

Honesty around the world

Tannenbaum and his coauthors found large variations in overall return rates for wallets in each country—ranging from a low near 14 percent in places like China and Morocco to a high near 76 percent in places like Switzerland and Norway. Civic honesty is clearly more common in some countries than others, suggesting that countrywide factors could be affecting people’s altruism.

“When you feel you can trust others and people aren’t deceptive or lying to you, the world feels like a better place”

Tannenbaum and his colleagues don’t know for sure what those factors might be, but they have some ideas. For example, they found that countries with a high gross domestic product, stronger democratic institutions, higher levels of education, and cultural norms for universal human rights were more honest. But he can’t say for sure what causes what, as the differences between countries really weren’t a focus of their study.

Still, he hopes their work will shed some light on what societies can do to encourage more honesty. Rather than treating people as if they only respond to “sticks and carrots”—meaning, punishments and rewards—policymakers might want to use interventions that appeal to people’s altruistic, moral natures, he says. For example, instead of governments posting signs showing heavy fines for littering, signs could focus on a cleaner environment or public safety—e.g., eliminating tripping hazards for seniors. Not only are these often simpler and more cost-effective, but if they work to make people more honest and altruistic, they will likely improve a society’s health and well-being.

“I don’t think this will come as a surprise to anyone, but when you feel you can trust others and people aren’t deceptive or lying to you, the world feels like a better place,” says Tannenbaum. “For both economic and psychological reasons, promoting honesty is something we all want to do.”