Many years of studying intergroup conflict have taught me this: The world is like a coloring book, and culture our crayons.

You see, the world provides us with only an outline, a suggestion, of what the boundaries of our experience should be. We fill in these outlines with our own interpretations, value systems, and behavior to complete our own depiction of what “reality” is. 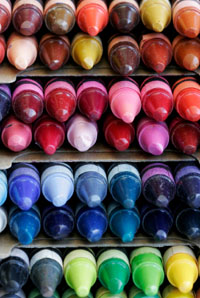 The drawings that people from different cultures produce can vary substantially. Take shopping for vegetables. In the U.S., shopping for produce in the local market follows this script: inspect the goods, decide if you are willing to pay the advertised price, and pay.

But in the Ivory Coast, you use different crayons. You shake your favorite merchant’s hand, ask about the family, chat it up, admire the quality of the veggies. Then s/he mentions a ridiculously high price. You laugh, or scoff, and then you haggle. There is a bit of wiggle room. You can lowball your merchant back, but not too much if you don’t know him/her well. Or you wait for him/her to reduce the price bit by bit.

“I’ll look around,” you might say, and if things are going well you might get quietly called back. “Just for you,” you might hear your merchant whisper—and then s/he gives you another too-high price.

This can go on for a while.

Westerners often note the inefficiency of this dance. What a waste of time, particularly when I have things to do, places to go, people to meet!

But the point of produce shopping in the open-air markets of Ivory Coast is not efficiency. It’s relationship building, with all its complications and benefits. Sometimes you pay too much, sometimes too little, but you leave having socialized. If this is your shopping crayon, the Western shopping experience—even in farmers’ markets—seems nothing short of sterile.

Inefficient or sterile? You can see that people apply value judgments to others’ drawings based on what crayons they have learned are appropriate for which drawing. They judge events based on their own crayon boxes, drawing from their own experience, so to speak, and they naturally judge others’ drawings as wrong. Hey, we say, that’s not the way you’re supposed to color this page!

One would think that certain events, like earthquakes or hurricanes, are not open to as much interpretation; their sheer magnitude and destructiveness should only evoke universal response of suffering and pain. Yet even these events are understood and processed through the crayons of our experience. Cappie Pondexter, for example, used her “belief in a just world” crayon to help her make sense of the Japanese earthquake, much to the dismay of those who didn’t share this ideology with her.

In a recent paper in the journal Basic and Applied Social Psychology, my colleagues and I showed how a close cousin of the belief in a just world—the Protestant Work Ethic—was affected by the events that followed Hurricane Katrina.

The Protestant Work Ethic, or PWE, is the belief that a person can get ahead in life by working hard, and it is one of the most widely shared and accepted beliefs in American society. It’s almost the quintessential American belief, in fact—you can pull yourself up by your bootstraps, you can do anything you set your mind to.

Yet following the devastation of Hurricane Katrina, African Americans’—but not European Americans’—belief in the the PWE plummeted. This was not a fluke of measurement. We saw the same pattern when we measured belief in the PWE with different people before and after the Hurricane, and when we looked at changes in the PWE for the same people before and after Katrina hit. Even a year later, when we reminded African-American and European-American people about the disaster, the endorsement of the PWE fell temporarily for the former but not the latter. Why?

But our data showed that the majority of European Americans saw the problems with the government’s response as being due to the sheer magnitude of the disaster: Millions of people over multiple states were affected, and America did the best it could under these difficult circumstances.

African Americans tended to see it differently. Yes, millions of people were affected, but a disproportionate percentage of those affected were African Americans, and the government dragged its feet (with disastrous humanitarian consequence) in a way it didn’t for other disasters. In the government’s response to Hurricane Katrina, African Americans saw reflected decades of differential treatment—and a cold reminder that no matter how hard you work, many times people will continue to judge you and treat you by the color of your skin.

I can already hear the automatic reaction of many readers: Here we go, pulling out the race card again. And in response from the other side: Stop belittling and recognize the facts.

Shouting and bitterness ensue, and the conversation about race, inequality, and privilege stalls. We stop—because it hurts, and because we don’t have the tools to understand how we got here.

I offer this: The conversation can move forward, however incrementally, when we recognize that the same phenomenon is occurring with Hurricane Katrina as with shopping for vegetables. Different groups draw from their own experiences to help them understand the events of the world.

In the case of African Americans, very real experiences of discrimination and prejudice shape the way that people understand other events, large and small.

In the case of European Americans, many have not been exposed to these types of discriminatory experiences, and people do not have this particular crayon as handy to them to help them interpret the outlines of the events the world throws at us.

I happen to be pitting the two groups here that we stereotypically use to describe racial tension (African Americans and European Americans), but the point about interpretation based on experience applies to all groups. We can have a conversation about how having family help out or visit when one is in college has different meaning for Asian Americans versus European Americans, and how an inability to recognize these differences can lead to hurtful vitriol.

Recognize that not everybody shares your particular crayon box, and that your drawing—however right and beautifully drawn it looks—is not the only way to color in that page.