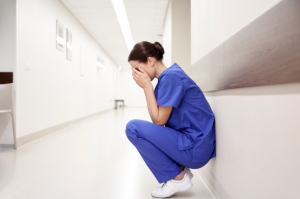 “For example, more men would pursue surgery,” she says. “If a woman did, that meant she wasn’t interested in having a family. Women would gravitate towards, say, dermatology, because with technological advancements, there were more opportunities to work at home.”

Habeck (whose name has been changed) became an emergency-room physician, and she married a dermatologist. But when they had children, he didn’t take advantage of those opportunities for flexible work. Instead, he expected Habeck to take primary responsibility for the children and household.

“I’d be up all night at work, and then I’d be up all night with the kids, because they were fussy, then I’d have to get up early to get them to preschool,” recalls Habeck. “I’d try to sleep when I could, but I had to clean and take care of the kids and do the grocery shopping, so I was just really tired all the time. But I accepted that as what I had to do.”

Recent research shows that Doctor Habeck’s experiences are not unique—and that their pervasiveness may contribute to a significant gender gap in burnout rates among male and female physicians. Fortunately, this work is revealing that there are steps individuals and society can take to close the gender gap. While these studies focus on physicians, their insights can be applied to many other fields.

The gender of burnout

Burnout is clinically defined as a combination of emotional exhaustion, cynicism, a sense of being ineffective at work, and a disconnection from your own thoughts and feelings that researchers call “depersonalization.”

Burnout rates among doctors and nurses can be quite high. A review of the research published last year by the National Academy of Medicine found that half of U.S. physicians and medical students have experienced burnout. (When I told Habeck that clinical definition of burnout, she replied, “Oh, yeah. Everyone in my department feels that way.”)

Many of these studies do not break down burnout rates by gender, but those that do have found that they are significantly higher among women than men. For example, a 2018 survey of 15,000 physicians found a ten-point gap in self-reported burnout rates between women and men. The Physician Work Life Study (published in 2000) used a nationally representative, random, stratified sample of 5,704 physicians to discover that women were 60 percent more likely than men to report feeling burned out. Women doctors are more likely to be dissatisfied with their jobs and to take long-term sick leave, which is often considered indicative of burnout. (While this article focuses on recent studies of doctors, burnout rates can be even higher for other kinds of health-care providers. Estimates for nurses range from 10 to 70 percent.)

It’s worth noting that men and women seem to burnout differently. Women physicians are more likely to suffer from emotional exhaustion, while men tend to describe depersonalization. This points to an important nuance in the data: As the review from the National Academy of Medicine notes, it might be the case that gender-based differences in the expression of burnout—such as emotional exhaustion—make it easier to identify among women.

It’s also possible that age is a more important factor in burnout than gender, with younger physicians more likely to feel it than older ones. Since the number of women in medicine has been rising, it’s possible that the higher burnout rate for women reflects the fact that older doctors (who are less susceptible to burnout) are more likely to be male. As time goes on and more women become doctors (half of all medical students are now women), we might see the gender gap in burnout shrink.

While researchers continue to sort through these data, one thing is easy to measure: Today, male physicians earn an average of $90,490 more than their female colleagues (which is actually down from $105,000 the previous year, so the trend is moving in the right direction). It’s almost certainly the case that the exact same factors that contribute to burnout drive the pay gap.

Why do women burnout?

For one thing, women tend to tilt toward specialties that pay less and permit more flexibility, but often involve seeing more difficult patients within a shorter span of time.

For example, it’s true, as Doctor Habeck suggests, that most surgeons are men—and surgery, like many other predominantly male specialties, is better compensated than other areas of medicine. In a study published last year in The Lancet, Rhea Liang and her colleagues interviewed women who left surgical training in Australia and New Zealand. They found numerous factors at work, including the impact of pregnancy, the unavailability of leave, the absence of role models—and a fear of repercussion for pointing out any of these factors and acting to change them.

In this way, women are pushed out of more remunerative specialties. Beyond that, female doctors face conditions that might contribute to both pay and burnout gaps. Doctors in acute care specialties often see many different patients a day, sometimes under incredibly busy conditions—and the patients themselves are often experiencing extreme physical pain. However, there’s some evidence to suggest patients have expectations of women doctors that could contribute even more to burnout, over the long term.

In a 2018 paper published in the Journal of General Internal Medicine, Mark Linzer and Eileen Harwood reviewed numerous studies to paint a picture of how gendered expectations might drive high burnout rates among women. One study found that patients spoke more during visits with female physicians and shared more information—possibly because women asked more questions about the patient’s well-being. As a result, appointments were 10 percent longer for female physicians compared to males, which can make for cumulatively stressful shifts. Another experimental study found that female patients were more likely than males to express satisfaction with women doctors when they had a caring communication style, while that didn’t matter at all for men doctors. In short, women simply face higher patient expectations than male counterparts in empathy and communication.

On top of all that, over 70 percent of women physicians report experiencing discrimination on the job—not just from coworkers but from patients, as well. Women physicians are far more likely to experience sexual harassment and assault than male colleagues.

But the biggest factor for burnout among women physicians might have more to do with how work and home interact. At home, women are still expected to take on the most responsibility for housework and child care—a fact that has been little recognized by hospitals. As the National Academy of Medicine report summarizes:

Gender-related bias seems to be even more prevalent among women physicians who are mothers. In a survey of an online group of physician mothers, one third of respondents noted experiencing discrimination related to their role as a mother. Among those who experienced discrimination, almost 90 percent reported that this was related to pregnancy or maternity leave; almost half were subjected to disrespectful comments from support staff about breastfeeding. Exposure to maternal discrimination was associated with an increased incidence of self-reported burnout.

All of these factors probably work together to produce gaps in both pay and burnout rates, as women become more likely to take leave, cut back hours, miss out on promotions or opportunities, and face daily demands that male doctors, as a group, do not. The consequences of burnout and depression can be serious: Women physicians are more than two times more likely to die by suicide compared to other women.

So, how can we close those gaps?

How to not burnout

Habeck chose emergency medicine in part because it offered more flexibility. Indeed, around the country, it’s rare for ER doctors to work more than 32 hours a week, and hospitals often encourage them to diversify the kind of work they do, so that seeing patients on the worst days and nights of their lives is balanced with other ways of serving patients and the hospital. This scheduling is explicitly a way to reduce burnout rates.

Even so, shifts can be long and demanding—with many overnights—and inconsistent week to week, which can inflict damage on family life. This can be especially hard on new mothers, which might help explain why male ER doctors earn 18 percent more than female counterparts.

At a certain point after her children were born, Habeck found that her round-the-clock life was becoming unsustainable. Rather than allowing herself to burnout, she pressured her husband to take on more domestic responsibilities, like getting the kids to school after she’d worked an overnight shift. She also insisted on being able to take time away from both work and home for activities that helped her to feel renewed and balanced—which for her meant hiking and camping.

Unfortunately, her husband resisted both these steps—and so she ultimately left him. Today, he’s forced to take care of his children half the time, while she has more time to recharge, even though she actually works more than she did when she was living with her ex.

However, individual solutions like Habeck’s don’t address the larger structural issues that make medicine difficult for women. Drawing on decades of research, the report for the National Academy of Medicine makes the following recommendations:

For Habeck, it’s the connection with patients that does the most to stave off burnout. “Having good interactions with patients makes the work fulfilling for me,” she says. “On a really busy day, you can’t do that. But on other days, you can really talk with the patients and their families, and make that human connection. I just try to grab those moments when I can and make the most of them.”