If you are a black person in America, you have a greater chance of receiving subpar health care. You are more likely to have less access to health care, receive less treatment for pain, have worse outcomes in treatment, and experience less compassionate attention from physicians.

Are there ways to reduce this bias? Yes—and a new study suggests that addressing physician burnout may be one of them. 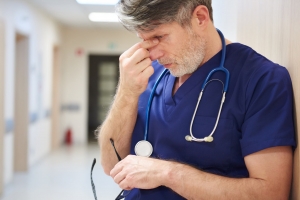 More than half of U.S. physicians are struggling with burnout, which is defined by exhaustion, cynicism, callousness, and diminished efficacy. Burnout doesn’t just hurt the doctors themselves, though. Research shows it also hurts the quality of patient care.

This new study, published by the Journal of the American Medical Association, suggests that some patients are hurt more than others by physician burnout, by lowering resistance to racial prejudice. “While doctors want to provide the same high-quality care to every patient, when negative emotions are at the forefront, our biases have a greater likelihood of coming out and impacting our medical decision making,” says Liselotte Dyrbye of the Mayo Clinic, who led the study.

Burnout and bias go together

The researchers drew on surveys of second- and third-year residents at 49 American medical schools to see how often they experienced burnout on the job or felt depressed; they also provided demographic information, like their age, sex, race, ethnicity, relationship status, and medical specialty. All of those included in the study were non-black.

In both years, residents also indicated how warmly they felt toward black people and toward white people on a scale of 0 to 100—using a research tool called a “feeling thermometer”—where differences between ratings indicated bias. In the second year of residency only, they were assessed on implicit bias toward black people using the Implicit Associations Test (IAT), which measures how quickly people can pair positive words (like beautiful, cheerful, friend) or negative words (like, failure, tragic, scorn) with white or black faces. Differences in response times indicate bias.

In their analysis, the researchers found that residents reported that they generally felt more warmth toward white people than toward black people—with higher levels of burnout corresponding with a stronger bias against blacks. Even factoring in a resident’s level of depression didn’t change this: More burnout led to more bias.

Depressed residents also held less favorable views of black people, but they did not show greater implicit bias toward black people on the IAT. Only those who tended to depersonalize others—an important aspect of burnout, along with emotional exhaustion—were more implicitly biased against blacks.

Does burnout cause bias?

The first part of the study found a correlation between bias and burnout. But does one cause the other?

“There’s something about having professional burnout that goes beyond a mental health problem like depression,” says Dyrbye. “It’s a distinct, unique phenomenon.”

Sadly, it’s also a common one. In the study’s cohort of 3,380 second-year residents, 45.7 percent experienced burnout and 41.3 percent were depressed. These high numbers don’t surprise Dyrbye.

“They really align with previous research in the field showing that physicians in training as well as physicians in practice have higher rates of burnout than other U.S. workers,” she says.

Of course, there could be other factors that affect bias other than physician burnout. But, if burnout increases bias, it adds to the reasons why medical schools should do more to support their students, while clinics and hospitals should do more for their doctors. Otherwise, it could spell continued health disparities for people of color.

“We need to effectively address the factors that are contributing to the burnout in the first place.”

“This study does point more to the need for meaningful system-level change,” says Dyrbye. “We really need to effectively address the factors that are contributing to the burnout in the first place.”

How to address burnout

To that end, researchers have had some success. For example, physicians who are more empathic are less likely to burn out, which means empathy training could help. Mindfulness training has also been shown to reduce burnout, as do supportive medical school faculty when they provide compassionate mentorship and promote collegiality.

But, while Dyrbye recognizes that physicians need self-care, she sees the problem as more of a systemic one. There is something fundamentally wrong with our current health care system, she says, including the fact that physicians need to treat too many patients in too short a time, have endless paperwork, and often lack appropriate support on the job. If we don’t address these systemic problems, she says, no amount of individual resilience training is going to help.

Dyrbye does have hope. As evidence mounts that reducing resident work hours helps them avoid burnout without sacrificing quality of care for patients, medical training programs may be encouraged to change their policies. And if improving workflow, providing opportunities for physicians to communicate with each other more on the job, or offering ongoing coaching for physicians helps reduce burnout, perhaps clinics and hospitals will also change course.

Following up on promising interventions like these could make a big difference to doctors and, in turn, to their patients, says Dyrbye. The more we do to prevent burnout, the better doctors can avoid falling prey to bias and help their black patients receive the quality care they deserve.

“The more we can get everybody—the funders, organizations, and the rest of the stakeholders—on board to address the factors that are contributing to burnout, the better off we’re all going to be.”