Around the world, coronavirus infection rates are on the rise again. Even places that were initially successful in curbing the spread are being forced to reinstate lockdowns in order to keep the virus in check. 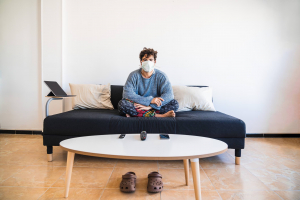 Understandably, it’s hard to remain in isolation at home. People miss their families and friends, and they feel cooped up and frustrated. While sheltering in place may be necessary to combat the virus and avoid over-burdening our health care systems, that doesn’t mean everyone will comply.

What encourages people to do the right thing? A new study suggests that government policies can make a big difference, but that individual personalities play a surprisingly important role, too.

In the study, researcher Friedrich Götz and his colleagues used data from an international research project that tracks people’s attitudes and behaviors around the pandemic in 55 countries. Hundreds of thousands of individuals filled out personality surveys, provided basic demographic information, and reported on how much they sheltered at home during the past week. With such a large number of participants in so many countries, the researchers could look at how people’s responses varied between and within different countries and consider the impact of government policies.

To measure personalities, the researchers relied on a questionnaire that captures the “Big Five” personality traits—conscientiousness (how diligent and industrious you are), agreeableness (how considerate and altruistic you are), openness (how imaginative and unconventional you are), extraversion (how much you enjoy other people around you), and neuroticism (how anxious and worried you are). To compare the strictness of government policies, they used the COVID-19 Government Response Stringency Index.

After analyzing the data, they found that stringent policies and personality both seemed to play a role in how much people sheltered in place. Perhaps not surprisingly, people self-quarantined more in areas with stricter policies, which saw decreased viral spread.

“It’s not an easy choice for governments to make, and there are tradeoffs, but as nations tighten the rules, people quarantine more, which is actually an encouraging finding,” says Götz.

But personality characteristics also played a role, he says. Specifically, people who were more agreeable, conscientious, open, and neurotic were all more likely to shelter in place, while more extraverted people were less likely to do so.

“Extroverts suffer the most [from lockdowns], because it’s a new situation to adapt to and they miss social connection,” he says. “So, they are not doing very well and have a great incentive to break the rules.”

One unexpected finding was that openness was the strongest predictor of who stayed home and who didn’t. Since open people tend to be more unconventional and less conformist, you might think they would comply less. But, Götz suggests, open people also like to travel more and have a more international focus. So, it’s possible they received information about the viral outbreak early on and were open to learning from people in other countries.

“If you’re an open person, you have a higher likelihood of having friends in another country, and that makes it personal,” he says. “You realize COVID is not something that people exaggerate about and that it has actually happened.”

Götz and his colleagues also considered whether personality was still relevant when governments cracked down. While openness and neuroticism mattered less, people’s behavior was still clearly linked to how agreeable, conscientious, and extroverted they were.

“Even with full-on lockdowns—the toughest, most stringent policies—extroverted people are still more likely to go outside, and people will still shelter more if they’re higher in agreeableness and conscientiousness,” he says.

Why is this important to know? Götz says it adds to a longstanding debate in science about how our social environment and our personality traits impact our choices. Rather than it being one or the other, his study suggests that both play a role.

“Our personalities give us the ways we think, feel, and act that endure across time, but there are also strong situational influences that will affect our behavior,” he says.

He also wants government and health care leaders to take heed. If they want to fight viral spread effectively, they should not only create stringent lockdown policies, but be cognizant of the fact that not everyone will comply, in part due to their personalities. He suggests crafting messages that show compassion for those having trouble with lockdowns—especially extroverts, who may be suffering most from the policy.

“It’s important for governments to say, ‘We hear you and we see you; we know you miss your friends,’” he says. But they should also emphasize that “this is a social phenomenon; it’s necessary to save the people you love. So, you still need to comply.”

And, he says, leaders need to provide more unifying messages and solidarity, too, regardless of personality.

“We absolutely need to make the point that this is a time for us as a species to stand together and to show that we have a backbone and care about each other.”