54,000 students have registered for the Fall 2015 run of the Greater Good Science Center’s free online course, “The Science of Happiness”; roughly 10,000 responded to a survey we gave them measuring their health, well-being, and personal life circumstances before the start of the course. From looking at the responses, we found four distinct happiness patterns among the students.

For the data nerds, the table below shows statistically significant correlation, or “r” values, representing the strength and direction of the relationship between values, for several of the measures included in the pre-course survey.

This pattern is consistent with two key ideas that we cover in The Science of Happiness:

2. People in romantic relationships are happier than singles

Consistent with our previous analyses of student responses, people in romantic relationships reported greater happiness, lower stress, and less loneliness than singles, as shown in the following graph. 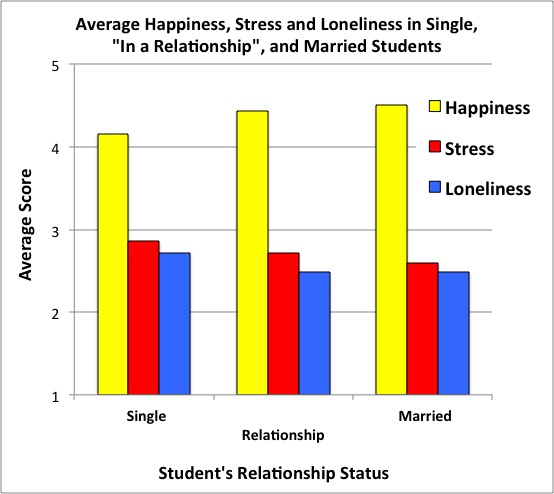 On average, students who described themselves as single also reported lower happiness and higher stress and loneliness than students who indicated being “in a relationship” or married.

Further, the type of romantic relationship appeared to make a difference: Married people were slightly happier, less stressed, and less lonely than those in a relationship but not married. This suggests—in agreement with the scientific literature—that social connections, sometimes in the form of committed romantic relationships, factor into happiness.

Since this course has such a wide age range, we were interested in whether and how age factors into happiness. Does happiness diminish with age, as the very profitable anti-aging cosmetic industry might have us believe? Our data suggest not. 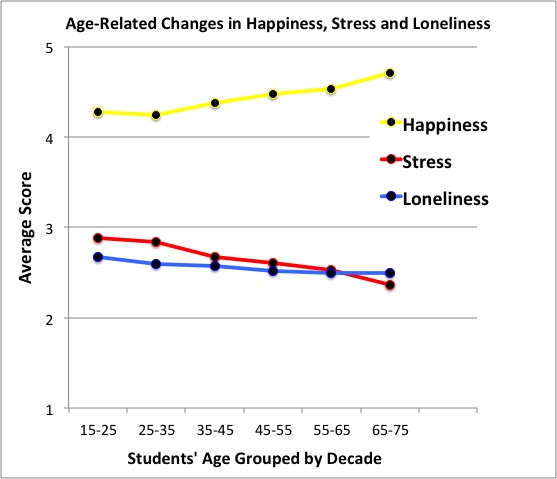 Measured cross-sectionally between 15 and 75 years old and grouped by decade, students’ age in years was associated with increasing happiness and a steady decline in loneliness and stress.

Contrary to the archetypal human quest for a fountain of youth and consistent with other scientific insights about aging and well-being, our older students were systematically happier, less stressed, and less lonely than our younger students.

4. Which countries are happiest?

Finally, we looked at how people from different parts of the world were doing in terms of happiness, loneliness, and stress before starting the course. Amongst students who completed the survey, those from Mexico and Colombia were happiest—happier than the 13 other nationalities with enough students for a valid measurement. Though the differences are slight, the overall pattern in the data suggests that in places where happiness scores are higher, loneliness and stress scores are lower, and, in turn, when loneliness and stress go up, happiness goes down. 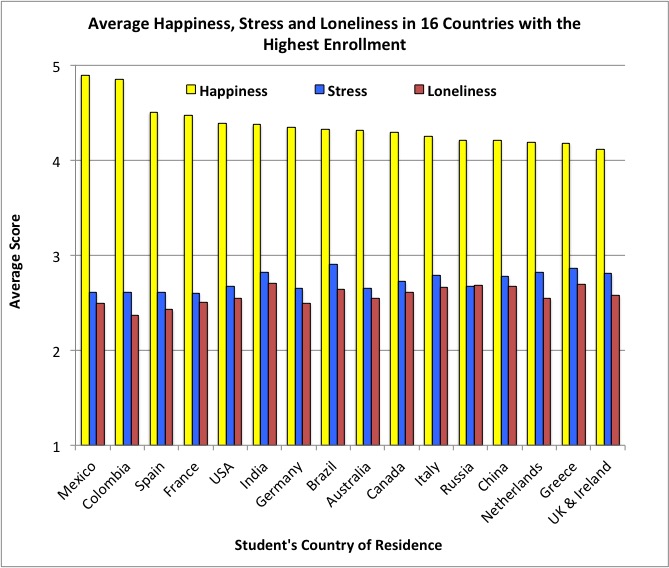 Taken together, these data suggest that social connection is the key to happiness. On the starting block of The Science of Happiness, students with strong, close connections tend to be happier. Will the knowledge and activities of the course help others increase their happiness? We will continue to share insights as we discover them. After the course is finished, we’ll be able to compare this survey to the post-course survey. This will tell us if The Science of Happiness increased anyone’s happiness. We’ll also discover what kinds of course activities seemed to help the most!