What does it mean to be heroic?

According to researchers, heroism means helping people in need or defending a moral cause, in the face of great risk. Heroic acts can take place in an instant, like saving someone from drowning, or over an extended period of time, like sheltering Jews during the Holocaust—or caring for someone with a terminal illness. 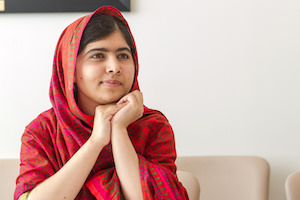 Malala Yousafzai, who stood up against the Taliban for women's education © United Nations Photo / CC BY-NC-ND 2.0

We think of heroes as extraordinary and larger than life; in awe of their noble acts, we may doubt that we could ever be heroic. But researchers are trying to demystify heroism: “We want to democratize the notion of heroism, to emphasize that most heroes are ordinary people,” writes heroism researcher Philip Zimbardo. “It’s the act that’s extraordinary.”

That means that heroes (and heroic potential) are all around us—which is what we discovered when we asked over 30,000 students in our Science of Happiness course to share their hero stories—times when they witnessed heroism and acted heroically themselves. Their tales may move and inspire you.

Great acts of altruism and forgiveness

One student endured the horrific tragedy of having her partner stabbed to death about 12 years ago. She, a Buddhist, found a way to forgive the murderer and eventually went to meet him in prison.

“Deep down in my heart, I knew that he must be struggling with the fact that he had taken another person’s life,” she writes. “I was able to tell him I had forgiven him and even to embrace him and speak with him openly and frankly about the way he had made me feel and how he had affected my life.”

She reflects, “Some people said that this act was heroic, but I’m not sure; what I do know for certain is that by showing compassion and forgiveness, it did help to change his life, and now he’s doing positive things for the community.”

Another student found out about her mother’s heroism only after her death. Her mother endured abuse from an alcoholic husband, and she struggled to raise and feed five kids with little money. When her husband died and she received a small pension, she ended up sharing it with his mistress and their two kids—the half-siblings of her own children.

“My mother never told any of this to any of her children, but the sacrifice she made to help the other woman and her children was an incredible act of selfless heroism, in my opinion,” the student writes.

Heroism in the face of danger

Another student served in the Army in wartime—a setting that’s commonly associated with acts of heroism. His best friend, who got teased for being weak during training, ended up sacrificing his life to save someone else in Afghanistan.

“Before he died in a Humvee accident with an IED, he dragged one of his buddies out of the hot area and saved his life,” the student recounts. “He meant everything to me, and to know that he changed the lives of a few means the world to me; he is my one and only hero.”

One woman lived through a mass shooting in her dormitory—and helped keep a panicking friend away from danger. She describes hearing the first gunshots and trying to reach the security office, when her friend showed up by her side.

“My next duty was now to get her safely away from the shooting. But it seemed everywhere we turned, there were bullets flying our way,” she recalls. They eventually made it out and climbed a fence to safety.

Beyond the call of duty

One student worked in a treatment facility for young people suffering from suicidal thoughts, depression, and other mental illnesses. She remembers two instances when she put herself in danger to keep her patients from harming themselves.

“One girl went into the bathroom and had made it known that she intended to end her life. I opened the door and tried to talk to her. She was in the shower and screamed at me that, if I didn’t leave, she would throw a heavy metal frame at me. I didn’t leave and told her that I wouldn’t until I knew that she was safe,” she recounts.

“There was also a time, at the same job, when a window broke and a resident dashed to pick up the glass. I stood in her way and refused to allow her access despite threats and attempts to hurt me. I think those moments, when I was able to stand firm and protect them despite threats to my own safety, are what make them feel heroic.”

Another student recalls her own heroic act while working as a flight attendant many years ago in Colombia. She was on a small plane that was forced to circle for half an hour at a very high altitude, putting the passengers at risk of oxygen deficiency.

“We, the members of the crew, gave the passengers two small bottles of oxygen that we had and saved the life of one newborn and 17 passengers; and the crew, including myself, didn’t use oxygen for ourselves.”

The heroism of kids

One mother would have lost her son but for the heroism of her nephew. The two kids, ages 10 and 12, were out hiking in the winter when her son slipped and fell into the icy water of a reservoir.

“He could hardly move between the weight of his clothes and the freezing cold of the winter water. My nephew took off his shoes and jacket and got into the water. With much effort, he dragged my son out,” she recalls.

“That was the day we almost lost these boys,” she writes. “It is hard today to think of this time some 40 years ago. It brings tears and gratitude.”

Another mother sees heroic potential in her son, in the brave acts of kindness he performs. “Ever since he was little, he has stood up for the underdog. I have watched him walk away from his friends to befriend others with disabilities, and watched it change his friends for the better. They, too, started to include less fortunate kids in their circle and would defend them fiercely,” she says.

Who in your life is a hero? Have you done something heroic? We may hesitate to share our great deeds, unwilling to “brag” or reluctant to call ourselves heroes. But these stories uplift us all.

“Just reading about the heroic actions of so many otherwise ‘ordinary’ people makes me experience deep warm feelings,” one student wrote. “This is truly the world I want to live in.”