My sons were bouncing on their beds before bedtime when I pulled out a new hand-me-down pair of pajamas for my youngest son, Julian. The top was covered with a bright blue-and-pink image of Kim Possible, Disney’s teenage superhero.

Julian was thrilled. Aidan, my oldest, smiled indulgently: How could his little brother embrace a girl superhero? Then I reminded him that the pjs were once his, ones he had pleaded for. He reddened and stopped bouncing. “They were?” he said. It’s true: Kim Possible, cheerleader and crime fighter, was once his hero.

But somewhere between the age of three and eight, all that changed, and the only form of hero for him now was a male one: Obi-Wan Kenobi, Anakin Skywalker, Han Solo, almost anyone of Star Wars fame—save, well, Princess Leia. When he and his best friend recently played a Star Wars computer game that required players to take on the role of Princess Leia, they laughed uncomfortably, as if partaking in something they’d best keep secret.

Not too long ago, female superheroes were scarce, mainly limited to Wonder Woman. But in recent years we’ve seen a rise in female heroes and superheroes—for both children and adults—on television, in comics, and in film. Among the more famous: Xena the Warrior Princess, Buffy the Vampire Slayer, Jean Grey of the X-Men, and, for the younger set, Powerpuff Girls. Yet the very idea of a female hero remains complex.

Challenge yourself right now to think about a real-life hero. Who comes to mind? Chances are it is a man in a dramatic situation, running into a burning building to save someone or fighting in a war. Women do the same things, of course. But our common archetype of modern-day heroes seems to revolve around acts of dramatic male physical prowess and risk-taking. 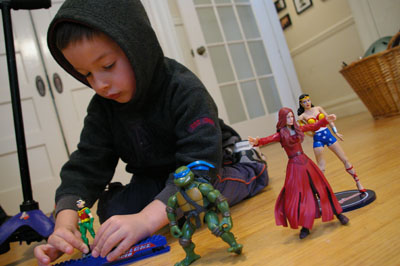 Recent research, however, has started to challenge that narrow conception of heroism. Alice H. Eagly of Northwestern University and Selwyn W. Becker of the University of Chicago studied the extent to which men and women participated in a variety of risky and heroic situations, such as rescuing Jews during the Holocaust. They also compared the number of men and women who had been awarded a Carnegie Medal, which is given to people who risk their lives trying to save someone else, and examined less dramatic actions that still involved risk, such as donating a kidney or joining the Peace Corps.

Their findings: Among those awarded a Carnegie Medal, men vastly outnumbered women, comprising 92 percent of medalists. Yet in every other case Eagly and Becker studied, women were more likely to engage in heroic acts than men. For example, among those classified as “Righteous among the Nations”—non-Jews who risked their lives to save Jews during the Holocaust—women outnumbered men in France, Poland, and the Netherlands. In the situations that demanded less risky forms of heroism, women also outnumbered men. For example, women comprised 57 percent of kidney donors between 1988 and 2004, and 60 percent of Peace Corps volunteers in 2003.

Moreover, there are other, quieter—but still arguably heroic—kinds of risks that women assume for the good of others. In numerous surveys, for example, when people are asked to identify a female hero, they list their mother or some other female relative or neighbor who made great long-term sacrifices to help another in need.

“There is a cultural association of heroism with the military and emergency situations, but we really don’t know the extent to which the public has a broader perception of heroism,” says Eagly. “It may be that the public is broader than the scholars in their understanding of heroism.”

So what would happen if the media image-makers were to recognize and amplify that broader notion of heroism—if, for example, they were to honor the real-life stories of young women who give up their privileged circumstances to help people in the Middle East or in New Orleans? Or if they recognized the sacrifices of midlife and older women who quietly care for a family member? Would the girl next door grow up perceiving herself as more heroic than she now does? Would her brother do the same? More importantly, once beyond the rigid gender-defined years of childhood, would men and women respect each other for the diverse forms of heroism of which both are capable—and as a result, would they act more heroically in all the public and private ways Eagley studied?

Until more research is done, one can only speculate. But this much at least seems reasonable: Recognizing broader notions of heroism would likely attune us to our own personal power, a vital step toward facing up to and tackling our many collective challenges. At a time of super-sized and urgent issues—from global warming to the decline in America’s reputation around the globe—that can’t be a bad thing.