Many cultures consider the human heart to be the seat of wisdom. Now scientists are finding some evidence for this, though the reality may be more complicated than it seems.

Previous research has suggested that higher heart rate variability (HRV)—the variability in the time between our heartbeats, which is a measure of heart health—is associated with better cognitive and emotional functioning. For example, higher HRV has been linked to better working memory and attention, higher levels of empathy and social functioning, and better emotional self-control. Could heart rate variability be linked to better moral judgments, as well?

Researcher Igor Grossmann from the University of Waterloo, Ontario, and his colleagues at the University of Western Sydney in Australia, looked at how HRV interacts with moral reasoning and judgment—or wisdom—in a series of experiments. 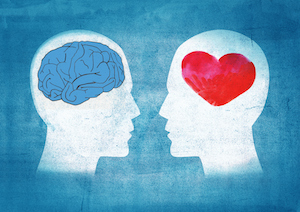 To measure wisdom, 186 participants were asked to select a social or political issue currently being debated in Australia that they felt particularly strongly about—such as climate change, unemployment, taxes, etc. Then they were asked to discuss their insights into the issue and how they thought it might play out over time using one of two possible viewpoints: 1) a “self-immersed” or subjective, more personal perspective, using first-person pronouns like “I” or “me” when possible; or 2) a “self-distanced” or more objective, third-person perspective, using pronouns like “he” or “she” when possible.

The researchers wanted to see if directing people to take the perspective of others (versus thinking in a more egocentric way) might play a role in wise reasoning, and how that interacted with HRV. Past studies had found that wisdom might not arise simply from higher levels of cognitive functioning (which is linked to HRV); a self-distanced perspective might also be needed to facilitate insight.

Observers blind to the experiment coded the participants’ discussions, looking for evidence of wisdom—defined as a recognition of one’s limits of knowledge, the possibility of change, and others’ perspectives, and an attempt to integrate these different points of view.

Afterwards, the participants were asked to make judgments about a fictitious person who engaged in neutral or morally ambiguous activities, such as returning (or not) a found wallet, or keeping change (or not) when a roommate gave them money to buy pizza. Observers rated these judgments for bias based on whether participants considered both dispositional factors and situational factors in making their judgments, or if they relied only on one or the other. For example, participants would be considered biased if they said that keeping a wallet signified that the person was dishonest, period (relying on dispositional explanations alone), without considering the possibility that circumstance—e.g., the person was poor and needed the money—might have played a role.

Analyses showed that having high HRV was connected to wisdom, but only if individuals had been instructed to take a self-distanced perspective. Participants with high resting HRV (recorded before and after the experiments) who were assigned to the “self-distanced” perspective were significantly more likely to display wise reasoning and less biased judgments than those with high HRV assigned to the “self-immersed” perspective, while those with low HRV did not seem to reason or judge differently based on their assigned perspective.

This suggests to Grossmann that having high HRV is not enough to improve one’s moral reasoning or to prevent bias, even if it has been tied to better thinking and emotional regulation in past research.

“The efficient processing of information or a lot of prefrontal cortex activity alone does not necessarily make you wiser. You also need to step beyond your own immediate self-interest for that,” he says. “So not everyone that has higher heart rate variability will suddenly be a wise person.”

Grossmann believes that the current study builds on some of his prior research in which he found important differences between intelligence, cognitive activity, and wisdom. In previous studies, he’d found that intelligence didn’t seem to impact one’s well-being, whereas wise reasoning seems to be associated with various markers of individual well-being and happiness. This suggests that wisdom and intelligence are separate constructs.

“Wise reasoning is only weakly related to general cognitive abilities,” he says.

Though HRV may play a role in wisdom, Grossman thinks that there isn’t a lot one can do to change it—it’s more a matter of individual differences. But, he says, we may want to consider training people in impartial, third-person perspective taking to help them be wiser in life, whether they have high HRV or not. He and his team are involved in a number of projects aimed at helping others to be more objective—in social, political, and intergroup conflict situations—and eventually producing more long-lasting changes.

“I don’t know exactly what the nuances of this intervention would be, but I hope to tell you in a year,” he says.