We all have people to whom we turn when we seek wise counsel. Some of those people may be friends and family; some may be people we’ve never known, but whose writings have inspired us. They seem to know what we should do or say in difficult circumstances and to navigate social relationships and business transactions more effectively than the rest of us.

Now, two newly published books—The Wisest One in the Room, by Thomas Gilovich and Lee Ross, and Friend & Foe, by Adam Galinsky and Maurice Schweitzer—offer their own kind of wisdom. Looking to social science research for guidance, they suggest that understanding human psychology can guide us toward wise action in many areas of work and life. 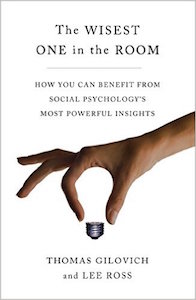 According to Gilovich and Ross—both renowned social psychologists at Cornell and Stanford, respectively—what truly makes someone wise is not just knowledge, but also insight and good judgment, and those are dependent on a deep feeling for other people’s motivations, fears, hopes, and passions, as well as how they can get off-track. “To be wise, one must be psych-wise,” they write.

Though many, if not all, of their insights gleaned from social science research have been written about before, it’s rare to have them so clearly articulated, well integrated, and supported by convincing numbers of studies. We see again how blind we can be to our biases, thinking that our perceptions of the world are accurate and objective when they are clearly not.

We also learn of our tendency to accuse others of having bad character when they behave badly, rather than considering environmental factors that may have influenced their behavior. These biases make up a sort of “naive realism,” according to the authors, which can be detrimental to our relationships.

“Naive realism gives us the impression that we see things the way they are, not as filtered or constructed in light of our expectations, preferences, or overarching ideology,” they write. “It is then a short step to seeing alternative views as the product of hearts and minds that are somehow defective.”

In one study recounted in the book, participants viewed footage of a protest being broken up by police; but half were told it involved anti-abortion demonstrators in front of an abortion clinic, while the other half were told it involved demonstrators protesting “Don’t ask, don’t tell” policies in front of a military recruitment center. What people “saw” in terms of actions taken by police and protesters—i.e., whether or not protesters were blocking the entrance to the building or how well the police responded—corresponded with their political views and the context of the protest…not the actual video footage.

Our behavior can be easily redirected by environmental cues and circumstances, though we more often recognize these environmental influences when we ourselves behave badly than when others do. This is because of the “fundamental attribution error,” or the assumption that other people’s actions are reflections of the kind of people they are, rather than their being due to situational factors. Understanding this bias can help us in our attempts to help people change their problematic behavior—such as a child who is not studying. It’s often best to consider ways to remove obstacles that make it harder to change rather than trying to amp up motivation through rewards and punishment.

“If you want to be the wisest person in the room, discipline yourself not to rush to judgment about individuals until you know, and feel you truly appreciate, the situational forces and constraints that are making their influence felt,” write the authors.

Gilovich and Ross go through many of the most important discoveries in social psychology research and explain how they work. We learn that how an event is framed will influence how we feel about it; how body sensations like heat and cold, or pain, can drive our interpretation of our emotions; how imagining an obligation far in the future makes us more likely to agree to it; how higher rewards for changing one’s behavior lead to poorer motivation to maintain that change; how we rationalize our behaviors to avoid cognitive dissonance; and many, many more findings explaining the connection between our minds and our behavior.

In their final chapters, they apply this research to important issues of our time, such as increasing human happiness, reducing conflict between groups, educating at-risk youth, and combating climate change. We learn that to increase happiness, we should spend on experiences rather than possessions, try to savor peak experiences, and give to others rather than give in to indulging ourselves. To reduce conflicts, we must understand how our naive realism thwarts our ability to compromise. To educate at-risk youth, we must teach a growth mindset and tie achievement to personal goals. And, to reduce resistance to combating climate change, we must tweak our joint sense of purpose by creating a community of individuals doing their part.

How to know friend from foe 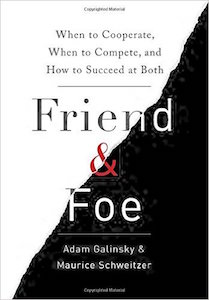 While Gilovich and Ross’s book is detailed and focused on how being “psych-wise” can improve society at large, Friend & Foe authors Galinsky and Schweitzer (both business professors) have a more narrow agenda: exploring how our psychology impacts our decisions to cooperate or compete with one another, mostly in the business world.

According to Galinsky and Schweitzer, research supports the notion that we are both a cooperative and competitive species, and, because of that, we experience some puzzling paradoxes. For example, we sometimes feel more threatened when those closest to us succeed than when others succeed, because we are “hardwired to seek social comparisons.”

As experiments with capuchin monkeys have shown, we primates are not pleased and will not work cooperatively when we see our neighbors getting something better for the same effort. Social comparisons can make us feel resentful or self-inflated, depending which side of the comparison we’re on, though we make allowances for those we consider “above” us in the social hierarchy, such as a boss.

So, why is this helpful to know?

The authors suggest that understanding social comparison helps you anticipate charged emotions around losing out (relatively speaking). For example, if your friend gets a raise at work and you don’t, you can be prepared for the inevitable let down and let it motivate you to work harder. Contrarily, if you get the raise, you can level the emotional playing field by sharing some negative information—perhaps explaining how the raise means longer work hours for you—and allowing your friend to indulge in some “schadenfreude”—the positive feeling you sometimes get from the misfortune of others.

The book is full of similar treatises on dichotomies in human behavior, along with tips for working with them more effectively. For example, the authors explore how to manage our desire for forming hierarchies with the need to work more cooperatively; how to use power wisely so we don’t create more social isolation for ourselves or incur resentment; and how to inspire trust and know when to trust, rather than be taken for a ride.

With hierarchies, it’s important that higher-ups provide “psychological safety” for those in one-down positions so they will feel safe to input into decision-making, especially in situations that require group effort. With power, it’s important to know when to show deference toward others and when to show confidence—too often, the powerful focus on appearing confident, but forget to recognize contributions from others, which leads to resentment. And, with trust, it’s important to display competence and warmth, but to also form long-term relationships and employ “gossip”—a natural system for checking on the reliability of others.

In a chapter on women in the workplace, the authors explain how women often find themselves in a double bind needing to appear competent and competitive to get ahead at work, but facing resentment from colleagues for these very qualities. Many of the attributes we associate with women—both negative, like “not being good at math,” and positive, like “being warm and caring”—are actually influenced by power, write the authors, and research has shown that they are quite malleable. If we are to rectify gender discrimination, we need to use techniques that reduce bias in hiring, as well as mentoring women who are already on the job, they argue.

“Whether it is in the classroom, on the athletic field, in the pitch room, or in the boardroom, a culture of equality can lead a group to have a competitive advantage over its less equality-minded rivals,” write the authors. “When it comes to gender, it is the cooperative and inclusive approach that increases talent levels and predicts competitive success.”

The strength of Friend & Foe is in utilizing social science to advise those who want to navigate work relationships (or any relationships) more thoughtfully. But sometimes the book feels like a collection of interesting counterintuitive study results rather than a cohesive whole with a clear viewpoint. Certainly, the book has plenty of interesting stories and good prescriptive advice. But, it would have been nice if it were just a bit more inspirational, perhaps…and less focused on aims for success in business.

Still, in combination, these two books provide a powerful treatise on why we need social science to help us understand our human natures better so that we make wiser decisions of all kinds. The ultimate challenge of our time seems to be to “know thyself,” and both books enlighten us on that topic. Only by knowing ourselves—our instincts and biases—can we work toward a better society without being fools about how we go about achieving it.