Recent studies suggest that 30 percent of 6th to 10th graders are either a bully or a target of emotional or physical bullying. But schools and parents are still trying to determine the best way to address this problem.

Conventional wisdom holds that bullies act out because they lack self-esteem, so effective anti-bullying programs should focus on boosting bullies’ egos. 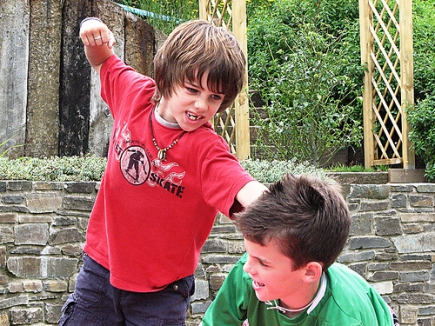 Yet research suggests something else: Many bullies are actually narcissistic and have very inflated views of themselves; their aggression is used as a means to protect their big egos when threatened.

Building on that insight, a recent study, published in Psychological Science, has identified an effective strategy to deal with bullying which offers a subtle but important shift from conventional wisdom. Rather than trying to boost bullies’ egos and self-esteem, the researchers find, give them tools other than violence to protect their egos.

In the study, led by psychologist Sander Thomaes of Utrecht University in the Netherlands, 405 6th and 7th graders were put into two groups. In one group, the students were told to write for 15 minutes about their most cherished values and why these values were so important to them. The researchers hypothesized that this “self-affirmation” technique would protect narcissistic bullies’ egos from threats by focusing them on “the core traits that define them as a person.”

In the other group, a control, the students were told to write about their least important values and why these values may be important to other people.

The researchers also measured the students’ levels of narcissism, self-esteem, and aggression before and after the writing exercise, asking students to (anonymously) report incidents of playground bullying.

The researchers found that, when students didn’t participate in the self-affirmation exercise, higher narcissism was in fact associated with increased aggression. But when the students did participate in the exercise, this association disappeared: Narcissism was no longer associated with increased aggression, regardless of whether students had high or low self-esteem.

In other words, write Thomaes and his colleagues, the exercise “prevented narcissists from behaving aggressively when they experienced ego threat.” Being reminded of their core values served to protect bullies’ self-image, argue the researchers, so they didn’t need to get defensive and try to protect their cherished egos through violence.

The authors note that the developmental timing of the intervention might have been significant. This study involved kids at a time in their lives when they are trying to forge an identity of their own.  Because the intervention makes the kids focus on their core values, it helps them define themselves in a positive way.

While all the effects of the exercise dissipated after three weeks, the researchers stress that this simple 15-minute self-affirmation exercise decreased narcissistic aggression for an entire school week—400 times the duration of the intervention itself.

“Do Parents want to raise Confident Kids?”  The question needs to be “Do Adults want to Raise Confident Kids”  Society has relagated to two people what all adults need to be doing.  Every adult, adolescents included, has a role in raising kids. It is the Global Family’s responsibility to provide the infrastructure to support kids in their “decision-making” experinces that results in a network of trust and confidence.

Very interesting article. I think that too often
parents create these narcissistic and violent
children by becoming overly involved, uber
supportive or “living through” their child’s
accomplishments. The parents are overly positive
and build up the child’s accomplishments leading
them to want that from all of their friendships and
relationships later in life. What these parents
perceive as loving and supportive actions are
actually very harmful to their children. I recently
read another article on the topic that I found to be
very interesting and informative,
http://www.psychalive.org/2013/03/the-problem-
with-narcissistic-parents/, I highly recommend it!