Humans are constantly doing nice things for each other. We perform offer a meal or a ride. We volunteer. We comfort people in their struggles.

But a new study suggests a counterintuitive way we help others: by making them feel bad, encouraging negative feelings of anger or fear. 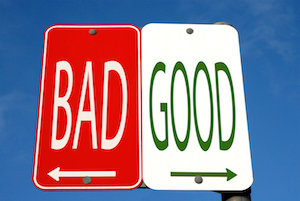 It’s easy to conjure up examples of how people make others feel bad for their selfish benefit—think guilt-tripping or intimidation. But researchers at the University of Plymouth wanted to explore if we ever do this for more altruistic reasons, for the other person’s benefit.

For example, when my brother gives me a hard time for eating too much meat, he’s making me feel uncomfortable with seemingly good intentions. When a friend has to confront her boss over unjust treatment, I might try to fuel her anger: That’s just not right! You deserve better!

To observe this phenomenon in the lab, though, the researchers had to use a bit of ingenuity. They asked participants to play two video games—a shooter game called Soldier of Fortune or a survival game called Escape Dead Island. Here, they reasoned, certain negative emotions might be beneficial: Anger could help you kill more enemies in the first game, whereas fear could be a powerful motivator for zombie avoidance.

After playing these games, 140 adult participants were told that they were going to make some decisions for another player, Player A (who, unbeknownst to them, didn’t actually exist). They would get to decide how Player A prepared for the game by indicating how much they wanted Player A to listen to different songs (which ranged from angry- to fearful- to neutral-sounding) or read different descriptions of the game (emphasizing elements related to aggression, survival, or vigilance).

Oh, and the catch? All the players would supposedly get raffle tickets based on their in-game performance. In other words, the better Player A did, the worse the participants’ own chances of winning a prize.

Before making their decisions, though, participants were either primed to be empathic and kind, or not. They were instructed to read a letter from Player A—describing sad feelings over a recent breakup—in one of two ways: while either keeping a detached perspective or imagining Player A’s feelings.

Ultimately, the empathic group tried to help Player A succeed, often by fueling negative feelings. When Player A was going to face down foes in Soldier of Fortune, they wanted him to get pumped up by listening to more angry music and hearing about the aggressive aspects of the game; for Escape Dead Island, they recommended more fearful music and descriptions that emphasized strategic evasion.

Surveys of the participants seemed to suggest that their motives were indeed selfless. Compared to the detached group, they indicated that they wanted Player A to feel more anger during Soldier of Fortune and more fear during Escape Dead Island, and that these emotions would be more useful to Player A’s success in the games. What’s striking here is that, unlike in most everyday cases of “being cruel to be kind,” they didn’t know Player A at all, and their choices were completely anonymous.

“Our results support extensive research on altruism and empathy showing that people help others even when altruistic behaviors may not entail a personal benefit,” the researchers write.

But can this strategy be overused? Is cruel kindness ever a bit too cruel? If you remind a procrastinating spouse about a looming deadline so he won’t cancel date night to work, for example, you have an ulterior motive—your intention isn’t solely selfless. Other times, we might try to convince ourselves that the pain we inflict on others is helpful, like yelling at a sensitive kid to “toughen him up.”

In its true form, though, “being cruel to be kind” is a fascinating way we help others. It employs a nuanced sense of empathy and an artful grasp of when and how emotions work. And it suggests yet again that happiness—or, in this case, kindness—isn’t always about feeling good.