I live with a hip-wiggler. When we’re in an elevator, Fred shakes to the muzak. If we’re pushing a cart though the grocery store and B. B. King’s “The Thrill Is Gone” comes through the speakers, Fred starts shimmying—and watching for my reaction. My role in this bit is to survey the scene in mock disapproval, one eyebrow raised, trying not to giggle. 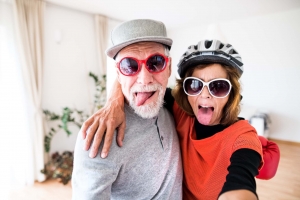 My partner is playful and I try to join in, in my introverted way. And that’s good because research suggests that couples who are playful together have closer and more satisfying relationships.

Unfortunately, we humans tend to become less playful as we get older. After all, play requires a bit of freedom and space; by definition, it’s not a productive activity. The schedules and stresses of life can impinge on our relationship and suck the playfulness out of it. There may come a day when Fred bops less to the beat.

That’s a bigger loss than we might realize. Scientists are investigating all the different psychological functions that play serves in romantic relationships, and they’re finding that it gives us more than just the occasional laugh. Play can bring us a sense of security, offer a way to communicate, and even help us resolve conflicts. If we’re serious about cultivating a close and lasting relationship, we might just have to find our own ways to dance through life.

Why bother being playful?

Why are humans playful? That might not be a question you’ve ever asked yourself, but it’s one that occupies the minds of evolutionary theorists, because (at least on its surface) play doesn’t seem to contribute to our survival. Rather than spending the time hunting for food or sleeping to save up energy, why would it be useful for our ancestors to hang around the fire doing funny imitations of each other? Wouldn’t that distract them from potential threats that might be creeping out of the bushes?

Playfulness, some researchers speculate, could serve as a signal to potential mates. Men who engage in friendly, reciprocal play with others might be demonstrating their lack of aggression—an appealing trait when violent males are a threat to their wives and children—and women who have the energy for play might be demonstrating their youthfulness, a proxy for their reproductive abilities. At least that’s the way certain researchers interpret the finding that, according to surveys, people seem to look for playfulness, humor, and a fun-loving attitude in potential partners.

When a 2014 study by the University of Halle’s René Proyer asked real people to reflect on how play served their relationship, they came up with a variety of answers.

First of all, people said, playfulness simply feels good; it makes us laugh. It also supports the relationship itself, in a variety of ways, they added. People talked about using playfulness to seduce their partner and make sex enjoyable, and to communicate things more effectively. For example, sometimes teasing our partner about their faults and oddities can be a way of quietly pointing them out, without the sting of criticism.

The very fact that play is unserious can make it a safe way to raise issues that are, in fact, quite serious. You can bring something up playfully—maybe a sexual request or an emotion you’re feeling—and gauge the response. Or it can work the opposite way: Serious relationship issues might crop up in your jokes and sarcasm, a signal that something needs to be dealt with. (Take, for example, the partner in one study who realized the repressed hostility embedded in her new nickname for her better half: “Moldy Oldy”).

A playful remark or gesture can also loosen up a tense situation, reminding your significant other that despite whatever stresses you’re under, you’re still in a safe and loving relationship. It takes a great deal of social intelligence to know when a gentle joke in the middle of a fight might make your partner crack a smile—but the research suggests that’s a skill well worth developing.

Of course, there are many playful paths we can take toward intimacy—and there’s something we can learn from the way researchers have enumerated, categorized, and catalogued all the different ways partners play.

One of the most common forms of play seems to be the secret language that develops between couples, from nicknames to private jokes. In my relationship, for example, Fred invented a word that’s an amalgamation of a Korean expression and our cat’s nickname—which makes absolutely zero sense—to communicate exasperation. I have to remember not to utter this word in the presence of others, lest it provoke strange looks.

Role play is also common. In the comfort of the romantic bubble, one might feel safe enough to pretend to be a puppy, do their best Elvis impression, or imitate the neighbor’s oddly high-pitched laugh.

Some play, of course, requires no words at all—my partner’s dancing being one example. We can playfully pilfer a cookie from our beloved, turning a normally selfish act into an affectionate exchange. Teasing is another behavior that walks the line between positive and negative, which is why play is a delicate negotiation: Our partner has to perceive our playful intent and join in the game, lest they be annoyed by our frivolity or put off by our kindly jabs.

Some play is more structured, like the rules and games that couples invent. When I’m debating Fred over a Googleable point of fact, we often bet three kisses on the answer before looking it up—and the loser has to immediately pay their debt.

In these ways, play seems to spontaneously arise. But then those one-off comments or behaviors turn into habits, morphing and evolving over time but always expressing an underlying affection and understanding.

So, it probably comes as no surprise that playful couples are often happy couples. In studies that survey people about their behaviors and feelings, those who are more playful in their relationships tend to experience more positive emotions, be more satisfied with their union, and feel closer to each other. They report that they communicate better, resolve conflicts better, and see their relationships in a more positive light.

As a participant in one study said: “Feel[ing] free to be silly together . . . reaffirms a closeness and sensibility to one another that would be hard to express in any other way—it makes me aware of how relaxed I feel with him and he with me.”

What kind of play will work for you?

However, achieving those warm, fuzzy benefits of play might depend on what kinds of play we engage in.

In a 2019 study, Proyer and his colleagues surveyed over 200 heterosexual couples about their styles of play and how satisfied they were with their relationships. Some play is considered “other-directed”—the kind that truly draws others in to silliness and good cheer. Other play is “intellectual,” where we enjoy word play and creatively solving problems. And play can also be “whimsical,” an amusement with life and a slightly oddball attitude.

One of those styles stood out in good relationships: other-directed play. People who tended to clown around in this manner were happier with their relationships overall. In particular, they were more likely to admire their partner, experience feelings of tenderness and togetherness, feel pleased with their sex life, be invested in the relationship, and believe it would last. Only some of these patterns held up for the intellectually playful, and still fewer were found in whimsically playful mates.

When we reflect on our own relationships, those playful moments are things to cherish. In the routine of the everyday, two people playfully construct a secret language and culture, and it is solely their own. Play involves showing our partner parts of ourselves that others rarely see, the childlike, silly side that might not be socially acceptable at work or in other settings.

“Playing is a reconnoitering of the unknown borders of two psyches, whose contours can become reassuringly familiar only through the experience of mutual vulnerability and nonjudgmental responsiveness,” writes marital therapist R. William Betcher. “It is through playing that we learn how to approach someone’s more intimate self.”

For this reason, there’s no one-size-fits-all way to play with your partner. Every couple’s play will look a little different, and that’s the point. If there were any prescription, it would be something like this: Let your silly self come out, appreciate the goofiness of your loved one, and do what makes you both smile.