My daughter’s now nearly three years old, which means she’s no longer just an object of adoration (and occasional aggravation) for me. She’s a bona fide playmate.

She’s finally old enough to get the nuances of hide-and-seek—most importantly, don’t jump screaming from your hiding spot until you’ve been found—and we’ve built some pretty sweet castles together with her Magna Tiles. 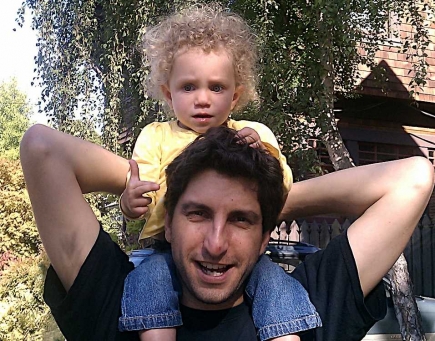 The author and his daughter, last year.

But when playtime’s over and it’s time to do parenting’s dirty work—by brushing her teeth, say, or helping her on the potty—my services are no longer required. “No, I want mommy to do it!” is something I’ve gotten used to hearing.

This is pretty demoralizing. I’d taken for granted that my wife and I would share the hardships of parenting as well as its joys, in the same way that we had shared the cooking, cleaning, and other household chores before our daughter came along. Ours is a generation of equals, after all, rewriting gender roles inside and outside the home—isn’t it? If I’m just a playmate, I feel like not much of a parent—and not much of a partner.

But new research is helping me see things differently. In a series of studies, Ohio State professor of child development Sarah Schoppe-Sullivan and her colleagues have found that when fathers regularly play with their kids, their relationship with their partner improves—which is good for the family as a whole, according to prior research.

But that’s only half of the story. In an unexpected twist, Schoppe-Sullivan and her colleagues also found that when dads take on more of the traditional caregiving duties—the teeth brushing and diaper changing—the couple’s relationship seems to suffer.

“That was surprising: that father involvement in caregiving predicted a worsening relationship between the mother and father,” says Schoppe-Sullivan. “But it was a pretty clear finding any way we analyzed the data.”

In one of Schoppe-Sullivan’s most recent studies, published earlier this year in the journal Development Psychology, she and co-author Rongfang Jia looked at roughly 100 middle-class families that had a four-year-old child and a mother and father living together.

In a separate part of the study, both parents had to work together to help their pre-schooler with two challenging tasks. The researchers observed these interactions to see how the parents related to one another during the challenge.

Then they brought the families back into the lab one year later to have them do it all over again.

They found that when fathers were more involved in play, their relationship with their partner was warmer, more supportive, and more cooperative one year later; the couple got into fewer conflicts and undermined each other less.

In contrast, when fathers were more involved in caregiving duties, the couples was less supportive of one another and more prone to conflict one year later.

Why would helpful dads actually put a strain on their relationship? Schoppe-Sullivan offers a few possible explanations.

“Caregiving could cause conflict because it encroaches on the mother’s territory,” provoking what’s sometimes dubbed “Maternal Gatekeeping,” she says. “Or maybe dads are doing work they didn’t anticipate doing and don’t want to be doing.”

She also notes that while her study ruled out many other explanations, one factor it didn’t consider was whether there was some family problem—a child with special needs, for instance—that was generating more paternal caregiving and more conflict.

Schoppe-Sullivan stresses that the results don’t let dads like me off the hook from ever having to give another bath. This research may just suggest that families like mine—and our culture as a whole—have more work to do toward true equality.

“It may not be as easy as saying, ‘OK, let’s share the parenting,’” she says. “Or, ‘Dads, you should help more, you slackers.’ It may be a charged area. Dad may not know how to approach it. Mom may encourage it verbally but discourage it in action.”

So while my wife and I—and the majority of other couples, according to surveys—aspire to a more equal division of household labor, we shouldn’t underestimate the practical and emotional challenges we’ll face along the way. “We need to prepare parents better for what’s to come,” says Schoppe-Sullivan.

Still, she’s optimistic, pointing out that her mixed results on father involvement may suggest that our society is in the midst of tackling these challenges.

“This could be part of a big transition,” she says. “If we do another study in 10 years, we might not find any evidence that any type of father involvement in co-parenting is bad.”

Perhaps the bottom line for dads like me is that, while prior research has linked father involvement to the well-being of a family as a whole, this study shows there are lots of different ways to be positively involved. As Schoppe-Sullivan told me, there’s no “one-size-fits-all” model for every family.

In other words, those shoulder rides may be more significant than I realized.

I have two issues here. One to do with common sense, the other to do with mum and dad.

It is saddening that the passing on of life skills from parent to child seems to be diluting from generation to generation so that now we have parents being always conscious of what to do and what not to do because of external research. What I am talking about is the loss of common sense and the ability to figure things out for ourselves.

Secondly,Let me state here and now - I stake no maternal territorial rights over changing diapers!!!

You have GOT to be kidding me with this article.
I’m a mother, and trust me, I came into
parenthood with zero natural skill for changing
diapers. I do not feel that cooking, cleaning, and
poop-handling is my “territory” that must be
defended.

Do you know what I like? Playing with my son.
Know what I don’t like? Dealing with his tantrums
and excrement. Guess what - my husband feels the
same way. It’s almost as if we’re both human
beings or something!

But the dirty work has to get done, right? Well, you
won’t believe this, but it turns out that when my
husband and I feel like we’ve each done an equal
amount of heavy lifting AND fun playtime for our
son, we like each other better.

Anecdotal evidence, I know. And I guess it makes
so much sense, it can’t possibly be right. But the
study you quoted sounds rather bogus too - why
didn’t they ask the mothers how often they played
with the child? Did they interview any families who
have switched the traditional caregiver roles, or
any same-sex couples to see if the traditional
“dad” role changes at all, depending on who is in
it?