Recently, a friend sent me a YouTube video called “Captain Kirk Reacts to Miley Cyrus.” I happened to watch it right after a very difficult conversation with my son that had ended with raised voices and bad feelings. The video made me laugh so hard I was crying. Soon I was sharing it with my son, and the tension between us seemed to melt away.

Laughter can be so healing, it seems; “Laughter is the best medicine,” the saying goes. But, is that really true? Does humor serve some adaptive purpose? And if it’s good for us, why do we find some things funny—like Captain Kirk cringing over Cyrus’ performance—while others leave us flat?

For answers, look no further than the new book, Ha!: The Science of When We Laugh and Why, by cognitive neuroscientist Scott Weems.

Weems explains what humor is, how things become funny, and why evolution gave us laughter. According to Weems, laughter and humor help us process conflict in our environment through the dopamine that is released in our brains when we find something funny. Dopamine relieves tension—which I discovered with my son—but it’s also implicated in motivation, memory, and attention, affecting processes as varied as learning and pain management.

It may seem impossible to study humor; but scientists have found ways, mostly through large surveys and fMRI research. For example, to find out what makes a joke funny, a German researcher named Willibald Ruch asked subjects a series of questions about hundreds of jokes and cartoons. Based on their answers, he grouped humor preferences into three types: “incongruity-resolution,” which involves “violating one’s expectations in novel ways;” “nonsense humor,” “which is funny only because it makes no sense;” and “sexual humor,” which is offensive or taboo. Although not everyone finds the same type of humor funny, the common thread in these joke types is that they all involve dealing with surprise and resolving the ensuing cognitive dissonance.

“What elicits laughter isn’t the content of the joke but the way our brain works through the conflict the joke elicits,” writes Weems. 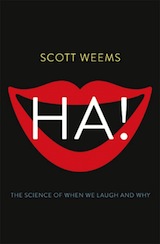 Take for example an old Groucho Marx joke: “One morning I shot an elephant in my pajamas. How he got in my pajamas, I don’t know.” Our brains will read the first sentence and be taken down a path imagining Grouch Marx on a safari in his pajamas, before we get the new image of the elephant actually inside his pajamas. That process of moving from one possible solution to the next involves a part of the brain called the anterior cingulate, or AC, which becomes more active when there are conflicting interpretations in the brain. The AC helps to quiet down the “louder” parts of the brain (associated with the expected response) to allow other quieter answers to emerge, and it’s particularly active during jokes. It helps us to figure out the novel solution, which, when resolved, gets incorporated into the brain and gives us that spike of dopamine. This is why we feel so good when we get a joke, and why jokes are not funny the second time around.

It may seem a bit sad to see humor broken down into its cognitive elements like this; but it’s also fascinating. We learn about why certain groups of people find certain types of humor funnier than others, and how important surprise is to humor. We also can appreciate the similarities between getting a joke and having a stroke of insight—the same cognitive processes go into effect when solving problems as when solving jokes, with the same pleasure evoked through dopamine.

Humor is an important part of our evolution, claims Weems—and other animals, such as rats, have been shown to have a sense of humor, too. If one tickles a rat by scratching its belly, it emits high-pitched laughter (normally outside of the human hearing range).

Experiments on humans have found that laughter can increase blood flow and strengthen the heart, much like aerobic exercise does. Laughter also helps decrease one’s threshold for pain, although not all humor is the same in this respect. According to Weems, positive humor—humor that looks for the bright side of troubling situations—is beneficial to our health, while darker, sardonic humor is not.

Importantly, humor is also great for our social relationships. People list having a sense of humor as one of the most important traits in a mate. In classrooms, a humorous teacher makes learning more enjoyable and increases a student’s motivation to learn.

In one study at San Diego State University, students enrolled in an Introductory Psychology course were taught using three kinds of lectures: one that incorporated course content-related humor; one that included humor, but not related to the course material; and one that used no humor at all. When researchers tested student’s retention of knowledge six weeks later, they found that those who attended lectures with course-related humor scored significantly higher than the other students.

Because humor is so good for us, and because it can be contagious, Weems suggests incorporating it more in our lives. He suggests going so far as to laugh the next time you hear a joke, even if it’s not particularly funny.

“Not only will you enjoy a happier, healthier life, but others will likely laugh along with you,” he writes.