I remember being a very compassionate child. While watching The Little House on the Prairie, I cried my eyes out when Laura couldn’t give Pa a Christmas gift. But 12 years of physical abuse and being forced to the confines of the “act-like-a-man box” wrung most of that compassion out of me by the time I reached adulthood. 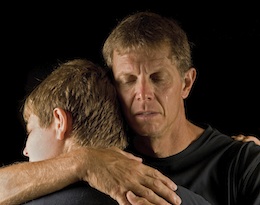 Although I was what therapists call “high functioning,” my lack of compassion was like a cancer that poisoned my friendships, relationships, business affairs, and life. At the age of 46, I hit rock bottom. Unemployed and on the verge of divorce, I found myself slapping my four-year-old son’s head when he wouldn’t listen to me. As the survivor of abuse, I had promised myself that I would never lay a hand on my children, but here I was abusing my beloved son.

I knew I had to change. I started with empathy, which led me to compassion. I committed to a daily meditation practice, took the CCARE Cultivating Compassion class at Stanford University, and completed a ten-day silent meditation retreat. I read and researched everything I could find on compassion. I found that the more compassion I felt, the happier I became.

Convinced that I had found an essential ingredient to a happy and peaceful life, I started to interview scientific and spiritual experts on compassion, trying to find out what made a compassionate man. Interviewees included Dr. Dacher Keltner, co-founder of the UC Berkeley Greater Good Science Center; Dr. James Doty, founder and director of the Center for Compassion and Altruism Research and Education at Stanford University; Dr. Rick Hanson, author of Hardwiring Happiness; Marc Brackett, director of the Yale Center for Emotional Intelligence; and Thich Nhat Hanh, the Zen Buddhist Monk nominated by Martin Luther King Jr. for the Nobel Peace Prize in 1967.

From these interviews and research, I compiled a list of what makes a compassionate man.

1. A fundamental understanding of compassion

Most events I attend that discuss compassion are predominantly attended by women. When I asked Thich Nhat Hanh how we could make compassion more attractive to men, he answered, “There must be a fundamental misunderstanding about the nature of compassion because compassion is very powerful…Compassion protects us more than guns, bombs, and money.” Although many men in society see compassion and sympathy as feminine—which translates to a weakness in our patriarchal society—all of the compassionate men I interviewed view compassion as a strength.

Dr. Hanson noted how compassion makes one more courageous since compassion strengthens the heart—courage comes from the French word “Coeur,” which means heart. Dacher Keltner argues that Darwin believed in “survival of the kindest,” not the fittest. Dr. Ted Zeff, author of Raise an Emotionally Healthy Boy, believes that only compassionate men can save the planet. Zeff argues that “the time has come to break the outdated, rigid male code that insists that all men should be aggressive, thick-skinned, and unemotional”—an excellent description of the act-like-a-man box that I tried to live in.

The compassionate men I interviewed agree with the Dalai Lama when he said, “Love and compassion are necessities, not luxuries. Without them, humanity cannot survive.”

All of the compassionate men seemed to have role models that supported their compassion instinct. Marc Brackett gives credit to his uncle, Marvin Maurer, who was a social studies teacher trying to instill emotional intelligence in his student before the term emotional intelligence was coined. Over 30 years after teaching in middle school, Maurer’s “Feeling Words Curriculum” acts as a key component of the Yale Center for Emotional Intelligence RULER program. Similarly, Marshall Rosenberg, author of Nonviolent Communication, constantly mentions his compassionate uncle who cared for his dying grandmother.

A role model doesn’t necessarily have to be living, or even real. Chade-Meng Tan, author of Search Inside Yourself, cites Ben Kingsley’s portrayal of Gandhi as a role model for compassion. Dr. Rick Hanson posits Ender from the science-fiction novel Ender’s Game as a compassionate role model. Certainly, Jesus and Buddha are obvious role models of compassion. The key is to treat them like role models.

Role models are not meant to be worshiped, deified, or prayed to. They are meant to be emulated. They pave the way for us to walk a similar path. Can we turn the other cheek and love our enemies like Jesus asked us? Can we transcend our ego and see all things as one, like the Buddha did?

In contrast are individuals who were not guided by positive role models. In his book From Wild Man to Wise Man, Franciscan friar Richard Rohr describes what he calls “father hunger”: “Thousands and thousands of men, young and old…grew up without a good man’s love, without a father’s understanding and affirmation.” Rohr, who was a jail chaplain for 14 years, claims that “the only universal pattern I found with men and women in jail was that they did not have a good father.”

Scott Kriens, former CEO of Juniper Networks and founder/director of the 1440 Foundation, concurs: “The most powerful thing we can do for our children is be the example we can hope for.”

All of the compassionate men interviewed broke out of the act-like-a-man box. At a certain point in his life, Dr. Rick Hanson realized that he was too left brained, so he made a conscious effort to re-connect with his intuitive, emotional side. When Elad Levinson, program director for Spirit Rock Meditation Center, first encountered loving-kindness and compassion practices, his first reaction was what he claims to be fairly typical for men: “Come on! You are being a wuss, Levinson. No way are you going to sit here and wish yourself well.” So the actual practice of compassion instigated his breaking free from gender stereotypes.

Dr. Ted Zeff cites a study that found infant boys are more emotionally reactive than infant girls, but by the time a boy reaches five or six years old “he’s learned to repress every emotion except anger, because anger is the only emotion society tells a boy he is allowed to have.” If society restricts men’s emotional spectrum to anger, then it is obvious men need to transcend this conditioning to become compassionate.

Dr. Doty points to artificially defined roles as a major problem in our society because they prevent men from showing their vulnerability. “If you can’t be vulnerable, you can’t love,” says Doty. Vulnerability is a key to freedom from the act-like-a-man box, for it allows men to remove the armor of masculinity and authentically connect with others.

In Raising Cain, Dan Kindlon and Michael Thompson argue that most boys are raised to be emotionally ignorant: “Lacking an emotional education, a boy meets the pressure of adolescence and that singularly cruel peer culture with the only responses he has learned and practiced—and that he know are socially acceptable—the typical ‘manly’ responses of anger, aggression, and emotional withdrawal.”

In contrast, most of the men I interviewed were “emotionally literate.” They seemed to see and feel things with the sensitivity of a Geiger counter. Tears welled up in Dr. Doty’s eyes a number of times when he talked about compassion. Dr. Hanson explained how he landed in adulthood “from the neck up” then spent a large part of his 20s becoming whole again. Much of Chade-Meng Tan’s Search Inside Yourself training that he developed for the employees of Google is based on emotional intelligence developed through attention training, self-knowledge, and self-mastery.

Similarly, Father Richard Rohr leads initiation groups for young men that force initiates to face pain, loneliness, boredom, and suffering to expand their emotional and spiritual capacity. It is no coincidence that these initiations are held in nature. Nature seems to be an important liminal space that allows boys and men to reconnect with their inner world. Dr. Hanson is an avid mountain climber. Dr. Ted Zeff advocates spending time in nature with boys to allow their sensitivity to develop.

Almost all of the men I interviewed regularly spend some time in silence. They’d hit “pause” so that they can see themselves and others more clearly. When our interview approached two hours, Dr. Rick Hanson asked to wrap it up so he would have time for his morning meditation. Meng Tan had just returned from a week-long silent meditation retreat a few days before our interview. Scott Kriens started a daily sitting and journaling practice almost ten years ago that he rigorously practices to this day.

Self-awareness through mindfulness practices like meditation, silent prayer, or being in nature allow compassionate men to embrace suffering without reacting, resisting, or repressing. Thich Nhat Hanh says that mindfulness holds suffering tenderly “like a mother holding a baby.” That poetic image is backed up by more and more research, which is finding that mindfulness can help foster compassion for others.

So the path to making more compassionate men is clear: understand compassion as a strength, get to know yourself, transcend gender roles, look for positive role models—and become one yourself. If that sounds too complicated, 84-year-old Marvin Maurer sums up being a compassionate man in five easy words, “Be in love with love.”