One of the mysteries of the Trump presidency boils down to this question: Will he prove to be an economic populist and advance the economic well-being of the poor and, most strategically, the rural white voters who turned out in droves to support him at the ballot box? Or will he prove to be the champion of the economic status quo, advancing policies that have given rise to the historic levels of inequality that are of such intense focus today? At a rally in Iowa, Trump gave himself away, saying he wouldn’t want a poor person running the economy.

So what if a poor person did run the U.S. economy? For the past 15 years, my lab has been studying the decision-making and ethical tendencies of the rich and poor, which I summarize in my book, The Power Paradox: How We Gain and Lose Influence. This has given us a pretty good picture of what the United States might look like if a poor person ran the show. 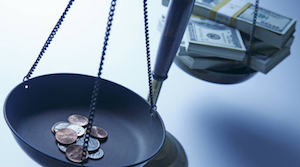 First, that poor person in charge would be more acutely aware of the problems that the poor suffer from today—problems that undermine the economic health of our nation. The poor are more likely to suffer from depression and anxiety, which cost the U.S. economy $210 billion a year in terms of sick days at work, health care costs, and other reasons. It is now well documented how commonly poor whites suffer from addictions to opiates, now wreaking havoc in so many American communities. A recent neuroimaging study of over 1,000 children found that being raised poor stunts the development of the frontal lobes, thus reducing the likelihood that those children will be vibrant and innovative contributors to the U.S. economy.

These are costly forms of suffering in the United States that our poor person in charge would be more likely to perceive and direct resources to. In one study from my lab that illustrates this point, participants viewed a one-and-a-half-minute video about children suffering from cancer. The videos were full of images of children in hospital settings with drawn faces and wisps of hair. In this study, it was the participants who had grown up poor who reported greater compassion and showed an increased compassion-related physiological response in what is known as the vagus nerve, which enables altruistic action.

Put a poor person in charge of the economy, and that person would be more likely and more equipped to take on the psychological, economic, and physical suffering of the poor, so costly to the health of U.S. society.

That poor person in charge of the economy, our laboratory science tells us, would also be less likely to champion economic policies that benefit the very rich. As chronicled by numerous social scientists such as my colleagues Paul Pierson and Emmanual Saez and their collaborators, the rising gap in the wealth of the rich and poor has been the defining domestic economic trend of the past 40 years. The origins of economic inequality aren’t mysterious—policies that transfer wealth to the very rich, like the current Senate proposal to repeal Obamacare. And new studies of economic inequality by social scientists such as Ichiro Kawachi at Harvard are finding that in historical periods or geographical regions where U.S. citizens live amidst greater economic inequality, they are likely to be less happy, suffer from greater physical pain, and succumb to all manner of health ailments and serious diseases.

A poor person in charge of the economy would advocate for policies that direct resources to and empower those who have less. We know this from many studies in social psychology.

For example, in one illustrative study from my lab, participants completed a variety of tasks and then were free to leave the lab. As they departed, they walked past a bowl full of 40 or so wrapped candies. On the side of the bowl was a label in bold letters indicating that the candy was meant for children who visit my department to participate in scientific studies. And, yes, in departing my lab it was the wealthy participants who took nearly twice as much candy as those who were from poor backgrounds. It’s a safe bet that if a poor person were in charge, we would see policies that would reverse the trend of economic inequality, which has had enormous costs, such as the fact that one in eight U.S. children suffers from hunger and food insecurity.

Perhaps most critically, a poor person in charge would be more likely to honor the ethical standards that give people faith in the government. The poor, studies show, are less likely to cheat, lie, shoplift, violate the rules of the road, and swear and bully at work. For example, in one study in my lab led by Paul Piff, participants played a gambling game, pressing a key on a computer that rolled a virtual dice. They played this virtual craps game five times and then reported the outcome of their rolls to the experimenter, which determined their chances of winning $50. Unbeknownst to the participants, the roll of the dice was rigged so that the sum of five rolls always totaled 12. The measure of interest: Did participants report higher scores than 12? It was the rich who were more likely to lie, reporting higher scores to the experimenter.

“The poor, studies show, are less likely to cheat, lie, shoplift, violate the rules of the road, and swear and bully at work.”

Put a poor person in charge of the economy, and we would have a better chance of seeing the president’s tax returns and having confidence that the emolument clause of the constitution is being honored. We would be less likely to hear of questionable Trump hotel deals in Azerbaijan, or that Ivanka’s high-end fashion company received prized trademarks in China the day after her dinner with China’s President Xi Jinping.

Put a poor person in charge of the economy, and it’s a safe bet we would be less likely to see this cycle of compassion deficits, resource grabs, and disregard of ethics that is of such concern in Trump’s presidency. This cycle produces the inequality and poverty of today that is costly to our economy; childhood poverty alone is estimated to cost the U.S. economy over $500 billion annually. The lab science tells us that a poor person would be better equipped to avoid this cycle, and take on these problems of the day. The irony is that were a poor person in charge, he or she would be more likely to better the lives of those poor white voters who were so significant to Trump’s election.

But, surrounded by the richest cabinet in U.S. history, it is pretty unlikely President Trump is aware of this irony.

This article was originally published on Fair Observer. Read the original article.