Money really can’t buy happiness, research shows. Instead, a new study suggests, those pursuing a happier life would be smart to sharpen their social skills. 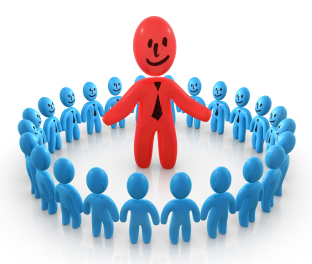 The results, published in the journal Psychological Science, show that people with higher sociometric status reported greater happiness, whereas their socioeconomic status was not linked to their happiness.

In a similar experiment, more than 300 people answered questions about the respect and admiration they received within their friends, family, and work circles. They also reported their personal sense of power in those social circles, and how liked and accepted they felt, along with their income and happiness.

Again, people of high sociometric status were much more likely to be happy than were people of high SES. Through their data analysis, the researchers also found that these people were happier because they felt a greater sense of power and acceptance within their groups.

“Where people stand in their local hierarchy matters to their happiness,” they write.

But does feeling respected and admired actually cause people to be feel happier—or could it be that people admire peers who project happiness?

The researchers addressed that question in two additional experiments. In one, they manipulated people’s sense of status by asking them to compare themselves to people who were much more or much less respected and admired than they were. Other participants had to compare themselves to people who had much more or much less wealth, education, and professional success. Then all participants had to think about how their “similarities and differences” might come into play if they were to interact with these imaginary others.

In the final part of the study, the researchers tracked 156 MBA students, following them from shortly before their business school graduation through nine months after graduation. For many of these students, their graduation brought a change in sociometric status—someone admired on campus, for instance, could be disrespected at his or her post-graduate job, even if his or her income went up.

The findings echo past research finding that income has surprisingly little effect on happiness, says Cameron Anderson, a professor at the University of Calfiornia, Berkeley’s Haas School of Business and the lead author of the study.

Instead, Anderson and his colleagues’ research suggests that what really matters is the respect, admiration, and feelings of power we get from others within our face-to-face groups.

“You don’t have to be rich to be happy, but instead be a valuable contributing member to your groups,” says Anderson. “What makes a person high in status in a group is being engaged, generous with others, and making self sacrifices for the greater good.”

Money only buys an illusion that we perceive to be Happiness.  As long as one is content with what they have, true happiness will exist. The moment desires come in, happiness goes out.

Yes. Respect makes us happy because:

(1) Respect comes from a person who has done or
will do things good for his or her symbiotic group,
and the group members reciprocate.

(2) Happiness comes from a person who has just
done or will do a-step-better for keeping his or her
DNA alive.

(3) The being respected, or being helped by
symbiotic members, is easier to do the a-step-
better than not being respected. Hence, they feel
happy relatively.

Money doesn’t buy happiness; it only buys stuff.
People pursue money thinking that by having more
stuff they become more. In reality, having more
never makes you more, but “takes” you more.
Once you buy something, it takes more money to
use it, insure it, maintain it, clean it, move it, fix
it, store it, and eventually, sell it or spend money
trying to get rid of it. People don’t respect you for
having “more.” They are envious and jealous. They
may even think that you got more by being
dishonest. Some even want to see you lose that
“more” or take it away from you. You need to
strive to “become” more - not have more. People
respect people who have contributed to the world
in a positive manner and who became more doing
it. If service-to-others and contribution to the
world is what drives you, you find that not only do
you find happiness and gain respect in life, but
monetary rewards fall into your lap without you
chasing them. The greed-driven desire to acquire
more than you need or deserve is a mental illness.

Ray - Good comment, but I’m afraid your notion that contributing to the world and serving others will not just bring respect and happiness but also cause money to “fall into your lap” is a tad naive.

The plutocratic elite that exerts increasing dominance over our society would love us to subscribe to the proposition that rich people got that way by contributing more to society. In reality, it is difficult to justify why a corporate CEO should receive several hundred times the compensation of his average employee or why financial speculators on Wall Street, who actually do a great deal of harm, should be among the highest paid humans of all time. Meanwhile, teachers, social workers, elder care aides etc. struggle on wages that make a decent life very difficult. In short, the equation between monetary rewards and contribution to society is completely bogus.

Unfortunately, in the United States at least, respect seems to be flowing rather too easily to people with money, whether or not they really “deserve” it. Indeed, as the recent fracas about Mitt Romney’s tax returns reveals, we are not allowed to question “success” at all.

The kind of ethos suggested by this article will not become widespread without an across-the-board re-evaluation of what society should actually value.

Higher Plane… Great response and appreciated. Upon reflection, the money vs. service-to-others life choices are hard to articulate because they are so different. Explanations on either side may seem very foreign to the other side. The environment you grew up in also has much to do with your choices and priorities as you get older.

Monetary rewards are also relative according to your past frame of reference. If you had a job where you made $100,000 a month and now you make $10,000, then do you consider yourself a failure? Or, do you look at the wealth you manifest for yourself as a direct result of your true value to the marketplace and the world at a point in time?

People’s idea of attracting wealth (by the way, I loved your review of “The Secret” at your web site) is usually based on getting the most for doing the least. That’s why so many fall for get-rich-quick MLM scams or Ponzi schemes. Thinking about a BMW in your driveway and only getting a used Corolla is more of a reflection of your relationship to abundance and not “thinking positive.”

If you have to sum up in one word why people don’t have all kinds of abundance in their lives it’s “complacency.” People are lazy. They don’t want to take the time or effort it takes to actually change themselves or the situation they find themselves in. They want the party they’ve been attending over the last few decades to never end. Guess what? It’s over.

People who are complacent remain stuck making the same decisions over and over that got them into complacency in the first place. Unfortunately, the Complacent Group is the group who are not wealthy nor do they contribute to society in a meaningful way. And, this group is enormous and waiting for someone else to take care of them or lead them to their next “quick fix” of money or sell them the next Self-Help book. It’s called “self-help” for a reason. Complacency only leads to regret.

As a solution for complacency, corruption and inequities in the world, I would offer this…everyone stop lying and start telling the truth to each other in all things. As Utopian as it sounds, I believe people would feel a lot wealthier in their lives.

If one has lots of money and be charitable at the same time, he/she can be happy too. Though money may not be the direct cause of such happiness, it is the indirect outcome.