For a healthier and happier life, you might try to quit something: sugar, gossiping, hitting the snooze button. These days, many people have directed their self-improvement energy at trying to quit social media, at least temporarily. 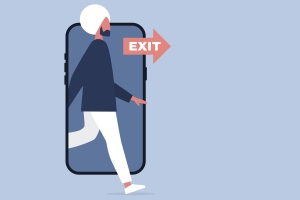 I decided to join them. On Monday, November 18, at 1 p.m., I embarked on my own Facebook and Instagram sabbatical—for research purposes, of course. Admittedly, I was curious how I’d spend the extra time—and whether all the curly hair gurus I follow were giving me an inferiority complex.

Digital detoxing is a trend that involves disconnecting from technology, whether it’s leaving your phone behind during a walk or spending a whole weekend without firing up your computer. “Facebook vacations” are one popular form: According to a Pew survey, 61 percent of Facebook users had deliberately refrained from using the site for at least several weeks. This website even offers free “Gone Fishing” profile photos you can use so your cyber friends know you’ll be away for a few days, a week, or a whole month.

Some people take a Facebook break because—like any bad habit—it’s sucking up their time and detracting from other things they could be doing. Others find the food pics, the glamorous selfies, and the flame wars to be a bore or a burden. At some point, the endless reel of photos and posts can become exhausting. Plus, of course, there’s the monumental question of privacy.

Facebook breaks are so popular that researchers are now studying what happens to people when they disconnect, and whether it can solve some of the psychological woes that are increasingly being attributed to technology. They’re finding that while breaks help some people in some ways, they hurt other people in others. Our relationship with Facebook, it seems, has become a “Can’t live with it, can’t live without it” situation. That certainly turned out to be the case for me!

I had reasons to be uncertain about how my social media sabbatical would play out.

In a 2018 study, researchers recruited nearly 140 people between the ages of 18 and 40 who were spending an average of nearly three hours per day on Facebook. About half of them were given a challenge: Quit Facebook for five days. When asked to predict what the experience would be like, the quitters weren’t too optimistic.

Their predictions were right—but only partly. Over the course of the study, people who stayed on Facebook had greater gains in how satisfied they felt with life. But below the surface, something positive seemed to be happening to the Facebook quitters. Although they didn’t notice any changes in their stress levels, their cortisol (a stress-related hormone that was measured before and after the study) declined. They also spent nearly two hours longer connecting with people face-to-face on the Sunday during the study—and the more time they spent with other humans, the better they felt.

I, too, didn’t notice any major psychological changes as a result of my one-week sabbatical. But—mysteriously!—I did find the time to listen to an 11-hour audiobook.

Participants who quit Facebook for a week in a 2019 study also used the extra time to do different things, particularly the men. Instead of scrolling Facebook for two hours a day, the quitters had more time to exercise and cook healthier foods at home; they also made fewer impulse purchases and saved more money. Over the course of the week, men who quit also felt less depression.

At the same time, the study illustrated one important role that social media play in our modern world—and what people miss out on when they quit. During their Facebook break, people consumed less news on social media in general. They were obviously missing out on news shared by their Facebook friends, and they didn’t seem to be seeking it out elsewhere.

Other studies have also pointed to some drawbacks of taking a Facebook break. In another paper published this year, researchers in the United Arab Emirates asked a group of students to quit social media for seven days, while another group stayed on as usual. By the end of the week, the quitters were faring worse: They were less satisfied with life, experiencing greater negative emotions, and feeling lonelier than people who had remained plugged in.

The researchers speculate that this could be due to the way they advertised the study. Earlier experiments told people that they might have to quit social media in order to participate—but this one didn’t. Participants “may not have been ready to abstain and were, therefore, less receptive to this kind of experience,” write Zahir Vally and Caroline G. D’Souza.

In other words, it matters why you quit: whether it’s something forced upon you or something you choose after careful deliberation. It also seems to matter what your digital experience was like before you took a vacation. The more intense and bittersweet your Facebook life is, the more you might benefit from time off.

In a 2016 study in Denmark, for example, researchers recruited over 1,000 Facebook users who averaged an hour on Facebook per day, connected to 350 friends. The group who took a Facebook break for one week came back rejuvenated: They were more satisfied with life and experiencing greater positive emotions by the end compared to the group who didn’t.

These benefits were particularly pronounced for heavy Facebook users, people who experience a lot of envy on Facebook, and people who use Facebook more passively (viewing other users’ content but not posting their own). In fact, light users and people who don’t get too envious on Facebook didn’t see any benefits at all.

Similarly, a 2018 study found that students who quit Facebook for a week reduced their stress even more if they had been addicted to Facebook beforehand. In the study above where a Facebook sabbatical alleviated depression, it was particularly helpful for men who were plagued by negative emotions when using the site.

I myself am a fairly passive social media user, but not a heavy one, which is maybe why my little experiment didn’t totally change my life.

How to get the most out of your Facebook break

If you do decide to take a Facebook vacation, how do you ensure that you’ll be among those who find it refreshing and relaxing rather than a downer? There hasn’t been enough research to answer this question conclusively, but a 2018 study has some suggestions.

In this paper, researchers conducted in-depth interviews with six people in Australia who had taken at least one Facebook sabbatical of three days or more. They asked people why they took a break and how it had affected their relationships. Based on these discussions, the researchers identified three factors that helped participants make the most of their Facebook vacations—key behaviors that can help us stay away from Facebook long enough to reset our stress levels and change our habits around technology.

The young participants whom the researchers interviewed had all taken multiple Facebook sabbaticals, creating a cycle of feast and famine, getting sucked into Facebook and then temporarily extricating themselves. This led the researchers to conclude that taking a Facebook break starts as a form of escapism—dealing with the stress of technology by simply avoiding it.

But in escaping, the researchers explain, people start to reflect on how their technology-related behaviors are contributing to their stress. In an ideal world, a sabbatical would change the way we interact with Facebook—which it seemed to, at least for the women in the study. Some of them pared down their friends list, created a new account with fewer friends, or muted notifications in an attempt to balance their online social life with the enriching offline one they had cultivated during their break. Indeed, a 2015 study found that people who quit Facebook for two weeks cut their usage in half in the first week back, from an average of 70 minutes per day to just 33.

For my social media detox, I made some exceptions—I had to post to Facebook for my job, and one afternoon I used Instagram to examine food photos from a restaurant I was going to eat at. I continued to use Facebook Messenger, which is more like a texting service, rather than laboriously telling everyone who might message me to not bother. I knew I would be writing this piece, and I have a great deal of self-discipline—but even for me, it was hard to go 100 percent cold turkey.

Technology is so woven into our lives that detaching ourselves can be tricky. For those who do manage to cut the cord, it’s often temporary. The promise of connection may entice us back to the familiar world of pings and profile pics. But habits are malleable. If your baseline is a couple hours of mindless scrolling per day and you reduce that to zero for a bit, you might be able to find a happy medium—at least until your next Facebook vacation.