It’s tempting to hide our true selves and worst moments on social media. Instead of sharing the whole story, we brag about our accomplishments and post pictures of beach vacations—stuff that research suggests can stimulate envy. Research also finds that Facebook users are at risk of addiction, loneliness, and other negative effects.

But that’s one side of the story, a story that Facebook’s 1.4 billion active users are shaping and rewriting every day. A new study suggests that sharing our struggles can, in fact, bring out the best in our Facebook friends. According to a paper presented at the recent CSCW 2016 conference, users can provide genuine emotional support to each other in times of distress.

Moira Burke and Mike Develin, data scientists at Facebook, analyzed millions of status updates where Facebook users shared their feelings. In the first large-scale study of its kind, they took a look at exactly what happens when people tell their friends that they feel annoyed, sad, heartbroken, helpless, and more. The results might instill some faith in humanity on social media. 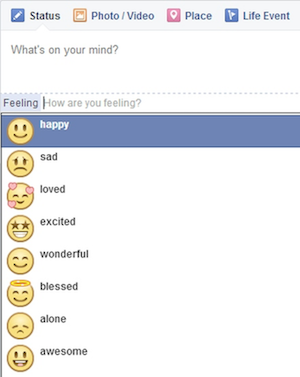 In an initial study of almost 1.4 million US Facebook users, the researchers examined 30 million status updates with a “feeling annotation,” that little box underneath a post where users complete the sentence “I’m feeling…” (When you currently use this feature, Facebook suggests a variety of emotions: blessed, excited, loved, amused, annoyed, sick, etc.)

Among the 30 million status updates they examined, 38 percent expressed a negative emotion.  In general, younger and male users tended to express more negative emotions than their older and female counterparts. Users were also more likely to broadcast their negative feelings if they had smaller and more-dense networks of friends. Denser networks are more tightly knit, which means that more of your friends are also friends with each other.

2. When you express negative emotions, your friends rally around you

In a second study, this time analyzing about 30 million status updates from more than 19 million US Facebook users, the researchers focused their lens on the response to an emotion. After we express a negative feeling on Facebook, how do our friends react?

If Facebook truly is as superficial as we fear, this type of post could be less popular. Our friends might feel uncomfortable; digital eyebrows might be raised at our flagrant flouting of the rule to “only post happy stuff.” But that’s not what the researchers observed.

“The results mirror face-to-face support provision, with friends lifting each other up in times of sadness,” the researchers say.

3. When you express negative emotions, your friends empathize

When users posted a negative emotion, their friends responded with more negative emotion as well—78 percent more than in responses to posts with no feeling annotation. When we feel bad, it seems, our friends feel with us.

Responses to negative-emotion posts contained nearly 2.5 times more supportive words and also more positive emotion, perhaps because friends were wishing each other well. “Mutual friends of the original poster [may be] collectively offering support to each other and trying to reappraise the situation,” the researchers say—a kind of ad hoc support group.

All these effects seemed to be amplified when Facebook users shared a select few feelings—namely, negative feelings about the self: unwanted, worthless, alone, helpless. These posts received 72 percent more comments that were 51 percent longer and contained twice as many negative-emotion words than your average response to a post without a feeling annotation. Emotions like unloved or defeated act as big red flags calling for our friends’ help.

Researchers also tracked how many private messages users received after posting their status updates, weeding out conversations that had already been in progress. When users posted negative, self-related feelings, friends mobilized their support across private channels as well: Messages to the user increased by 24 percent, and you can easily imagine the content (although the researchers didn’t study it): I saw your post—are you okay? Is there anything I can do to help?

On the surface, then, it would seem as if Facebook users are providing genuine emotional support to each other, looking out for their friends and empathizing with their emotions. We do know that people feel closer to their Facebook friends after getting comments from them, for example (and more so than after getting a like). Future research may tell us how Facebook users feel after the particular emotional interactions studied here, and what happens if our negative feelings get no response.

In the meantime, this research might encourage all of us to share more about our struggles on social media. Your tough times can bring out the best in your friends—and help make Facebook a better place for everyone.