About 1 billion people in the world today are grandparents. Because humans are living longer, we are spending more time in the grandparenting role compared to past generations. What’s more, people are having fewer children overall, which means that grandparents can dedicate more distinct time to each grandchild. 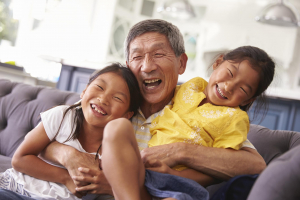 Grandparents have been universally important in families across time and their role continues to evolve, but their involvement in their grandchildren’s lives is different around the world. In the United States, roughly 10% of grandparents lived with a grandchild in 2012. In Africa and Asia, living in a multi-generational household is a common practice.

A number of recent studies of families in several Asian countries help to shed light on how grandparents are involved in coparenting, which researchers define as the sharing of child care and upbringing responsibility among two or more adults. These studies suggest that children benefit when parents have strong relationships with coparenting grandparents, and point to some ways that this relationship can be nurtured.

When parents and grandparents get along, the benefits seem to trickle down to both parents themselves and to children.

Researcher Xiaowei Li and her colleagues recently explored parent-grandparent coparenting in China, where it is very common, across multiple studies. In their 2019 study, nearly 180 mothers of preschoolers completed questionnaires about their coparenting. The majority of families lived in three-generational households, and 80% of families had only one child.

The questionnaire asked about positive aspects of the parent-grandparent coparenting relationship, like how much they agreed, felt close, supported each other, and endorsed the grandparent’s parenting, as well as challenging aspects like how much the grandparent undermined them or didn’t do their fair share of child care, and how much they had conflict in front of the child. The researchers also measured how competent mothers felt in using parenting strategies and teaching their children age-appropriate skills. At the start of the study and six months later, mothers answered questions about their children’s social competence—how well they were able to get along with others.

The findings? Mothers who had strong coparenting relationships with grandparents (mostly grandmothers) tended to feel more effective in their role as a parent, and, in turn, their children tended to be more socially competent six months later. The researchers explain that grandparents, with their rich parenting experience, can provide support, role modeling, and encouragement when they collaborate in raising children, which could influence how competent mothers feel in their parenting role. And when mothers are feeling more confident, they can approach parenting with more positivity and persistence, which can boost their children’s social development.

Parent-grandparent coparenting also seems to influence other aspects of children’s development. In a 2020 study, Li and her colleagues explored its effects on preschoolers’ effortful control—their ability to regulate how they respond to a situation, plan, and notice novelty or mistakes, which plays a role in children’s social-emotional well-being. For preschoolers, it might come into play when they get a gift they don’t like, have to figure out how to share toys, or recognize that someone broke a rule in a game.

Li and her colleagues explain that when parents’ coparenting relationships with grandparents are not in alignment, then greater conflict between mothers and fathers can impact the emotional environment of the family and, in turn, drain children’s energy and resilience. On the other hand, greater harmony in parent-grandparent coparenting relationships can create a more nurturing environment for children to observe and learn self-regulation.

Finally, parent-grandparent conflict can influence other family relationships. In another 2020 study, Li and her colleague took a deeper look at the three generations of interpersonal relationships. In addition to measuring the quality of parent-grandparent coparenting relationships, they also measured mother-father marital relationships and parent-child relationships in over 300 families from China. Specifically, they asked mothers and fathers how frequently they had conflict in their marriage. They also asked mothers and fathers about the closeness, conflict, and dependence between themselves and their preschoolers.

“There is an old saying in China that ‘everything will flourish if family is harmony,’ which shows that family’s harmony is supreme,” explain Li and her colleague. “Even in cases of conflict, parents and grandparents would put their family interests first and control their negative feelings.” On the other hand, if negative interactions are happening between parents and grandparents, then the stress and conflict can spill over into other family relationships.

What steps can parents and grandparents take toward a stronger, more harmonious relationship? A new study offers at least one clue about the role of good communication.

Parents (mostly mothers with a university education or higher) completed questionnaires about how open or conflictual their communication patterns were with the grandparents. They also were asked about the grandparents’ psychologically controlling behaviors, like whether the grandparent was disappointed if they were not relied upon or interfered in their problems.

The researchers found that parents with more open communication patterns tended to have more cooperative coparenting relationships with grandparents. What’s more, grandparents who were less psychologically controlling tended to have more open communication patterns and, in turn, less conflict in their coparenting relationships.

Hoang and her colleagues explain that parents can achieve a more balanced coparenting dynamic with grandparents by building up their assertive and constructive communication skills to resolve disagreements. Open communication involves feeling that you can freely exchange information without constraints, and you have a sense of being understood.

This recent research on grandparents highlights that navigating the coparenting relationship is not without its challenges. But grandparents’ involvement in children’s upbringing can confer great benefits for families and grandparents themselves.