Recently, my adult children let me know that when they have children, they want me to be involved in their care. I was thrilled, but also humbled. Will I have the energy? How will I balance my work? And what if I make a misstep?

Many people my age delight in their newfound role with grandchildren. Yet I know others who founder at the edges of their children’s families, unable to find a comfortable way to engage. They want to be more involved, but their overtures are rejected or their relationship is unhappily limited. 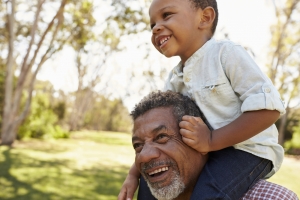 In her new book, Unconditional Love: A Guide to Navigating the Joys and Challenges of Being a Grandparent Today, Jane Isay reminds us of the value of grandparents but also delineates the important rules of engagement—when to deepen the conversation, when to back off, and how to stay on your children’s and grandchildren’s teams. Books or articles on grandparenting are few, and they frequently paint simplified or idealized pictures of this set of complex relationships. Isay’s perspective is nuanced, practical, and hopeful, and is a wonderful resource for grandparents-to-be.

The gifts of grandparents

My own grandparents were safe harbors in my turbulent childhood. My mother’s mother, a prohibitionist and Sunday school teacher, was the person who was most interested in my thoughts—on any subject—which made me feel valued. My mother’s father, aloof and removed, found a way to reach out by making me rye bread, playing cribbage with me, and taking me on his long walks that followed frozen rivers through the woods. With both of these grandparents, I found a peace and acceptance that was absent in my immediate family.

In the best cases, grandparents’ unconditional love, slower pace, and careful attention nurture grandchildren’s “moral imagination”—the “ability to put themselves in the shoes of others, to understand their own feelings, and to respond to the world with kindness and acceptance.” Grandparents’ unconditional acceptance helps to grow children’s empathy; grandparents impart courage, as grandchildren witness living examples of lives filled with love, sacrifice, and struggle; and grandparents’ encouragement of children’s dreams builds confidence and personal agency. Grandparents are more likely to see grandchildren for who they really are, not who they wish them to be, writes Isay.

Grandparents also hold a unique position in the family system, Isay explains. They are the keepers of the stories that bridge multiple generations and that contribute to a child’s growing sense of autobiography—where they came from, who their ancestors are, and the qualities they’re connected to.

Isay offers tips on creating channels of connection and communication with grandchildren: how to enter a child’s world, how to stay in relationship as they grow, how to create the rituals that foster consistency and fun, and when to let go. It is not the material gifts or the forbidden indulgences that are memorable to grandchildren, she says, but the gifts of your perspective and access to your world—taking them birdwatching, watching your approach to panhandlers, validating their emerging truth (like their gender identity), and accepting a teenager’s growing—but temporary—sense of distance.

Isay’s numerous interviews with grandparents and grandchildren illustrate the creative ways that individual people navigate this special relationship. One grandfather paused his interview with Isay to greet his four-year-old grandson the way he always does—by hiding from the boy as he walked through the door and then jumping out to surprise him in a gleeful meeting ritual.

My favorite part of the book addresses something most grandparenting books overlook—the relationship between grandparents and their grown children (and children’s partners). Tending to these relationships, Isay reminds, is not only rewarding but important to stabilizing the fabric of love that supports a grandchild.

With your own adult children, Isay says, communication can be easy and effortless because of a long history together. Or, if there are unresolved conflicts from the past, it can be more difficult. Add to the mix that your children’s partners are challenged with figuring out where they belong in your extended family, and you have some potential stumbling blocks to harmony. Isay encourages an attitude of respect, communication, forgiveness, and self-restraint. 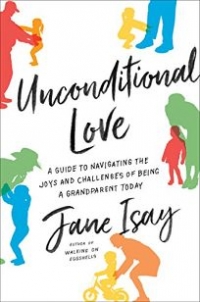 Unconditional Love: A Guide to Navigating the Joys and Challenges of Being a Grandparent Today (Harper, 2018, 240 pages)

In particular, observe how your adult children want to parent, she advises. Support them by respecting their rules (about sugar, screen time, material possessions, and more). And if there’s trouble between your child and his or her co-parent, stay neutral, or get out of the house. Keep your criticisms, opinions, and revelations about how you did things to yourself. “Respect makes life easier and keeps the welcome mat out,” she says.

Yet Isay recognizes that grandparents have concerns and wants, too. She deftly and kindly advises on how to navigate your own needs with the new family. For example, your limits regarding how much time or money you can spend on your grandchildren may require intentional conversations to avoid misinterpretations—for example, that you don’t like them or that you have favorites.

The limits of Unconditional Love

Isay’s voice is one I pay attention to. She is a masterful editor who has brought numerous well-known psychology books to the public and has authored many of her own books, as well. (And while this may or may not reflect on her wisdom about childrearing, it feels worth noting that her son is the founder of the beautiful and humane audio project StoryCorps.) Her prose is gentle and light, and she shares her own feelings of joy, reward, humility, and hurt with a seasoned and mature candor.

Her book does falter in a few ways, though. Research shows that it’s the quality of the relationships within the family that matter most to children’s developmental outcomes. On that point, Isay seems to offer mixed messages: While she rightly advocates authentic and empathic relationship-tending, she every so often slips into the view that families are political entities to be managed—that adult children have the power to welcome or distance you, for example, and that every grandparent’s goal is “all about access to the baby.” While both may be true, the second conversation can undermine the goal of the first.

By framing a grandparent’s goal as “access,” Isay risks reinforcing the common lament of new parents—that grandparents become obsessed with their new grandbaby and in the process ignore the new parents at a time when they need extra understanding and care. In addition, what may feel to a grandparent like “limited access” can be a healthy and legitimate boundary drawn by a parent who has the right to do so, but Isay does not fully explore this perspective. Perhaps limited access could be positively reframed as a red flag for a relationship in need of attention.

Isay discusses diverse grandparenting scenarios, such as when distance makes cultivating a relationship challenging, when adult children need serious help, and when grandparents have to take over parenting responsibilities. But her general point of view seems to assume an intact family comprised of two heterosexual parents, when research shows that this is no longer the “traditional” American family. Fewer than half of American children grow up with two married, heterosexual parents who are in their first marriage. As a result of this disconnect, some potential readers may feel overlooked.

Although steeped in a well-digested knowledge of psychology, Unconditional Love is not a science-based book. Isay does not often support her claims, and her interviews are simply anecdotal and illustrative, which she acknowledges. The book also fails to address the situation where the grandparent may be harmful, unkind, absent, or narcissistic. Indeed, many grandparents need much more skill-building than a book like this offers. However, for the grandparent who is already self-aware and in need of just a little more insight, this is a wonderful orienting compass to a new phase of life.

Development is lifelong, and becoming a grandparent can foster growth in not only the grandparent but the entire family system. My own parents—who raised me in a conflicted and dysfunctional environment—became terrific grandparents to my daughters, offering loving arms, teaching skills like knitting and woodworking, and beaming with joy and pride in all their accomplishments. They are my children’s roots, their tribe, and their cheerleaders.

I hope to do as well for my own grandchildren.