Consciously and unconsciously, many people don’t think so. Despite being on track to become America’s largest immigrant group, research has shown that Asian-Americans are often unconsciously seen as less American than those of European descent, more so than other minorities. This implicit relationship between being white and being American is particularly challenging in an increasingly diverse country. 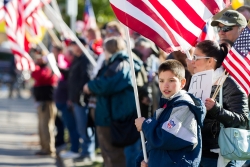 What factors are at work in shaping perceptions of how much Asian-Americans belong in the United States? In a paper published this past spring, two San Diego State University psychologists—Thierry Devos and Melody Sadler—delved into this question. Their key finding should actually give us hope that our definition of American is expanding to include many different kinds of people—but so far this change is concentrated only in certain areas of the country.

Sadler and Devos used data from the Asian-European American Implicit Association Test (administered by Harvard University’s Project Implicit), looking at results from 304 metropolitan areas. Almost half of the over quarter million participants were white and a majority were young adults. In this study, the researchers were looking specifically for how quick people were to associate Asian-Americans with symbols of America, under the research-tested understanding that this would reveal levels of implicit bias. Then, they compared the results of this test to three different indicators of diversity in each city: minority representation, variety, and integration.

Their key question: What characteristics seemed to shape bias in a city?

The answer is not that surprising, given what we know about contact between groups. In many cities, Americans still tend to equate America with whiteness. However, as the number of Asian-Americans in the area rose, prejudice fell.

But the presence and integration of Asian-Americans alone didn’t increase acceptance. In fact, any level of regional diversity seemed to broaden conceptions of who can be American. “This is happening in areas that might be perceived as more multicultural, meaning that they have a larger representation of people not only from Asian-American background, but also from Latino in particular, and then as well from African-American backgrounds,” says Devos. In other words, in diverse cities, Americans are starting to be able to associate non-white Americans with American identity.

“So, in these environments, it seems to be the case that as groups are more evenly represented, the idea that ‘American’ has to mean white is being diluted because people are seeing that ‘American’ is really a lot more than European,” says Devos.

This kind of result is predicted by intergroup contact theory. In the mid 20th century, Harvard psychologist Gordon Allport theorized that one of the most effective ways to break down prejudice and build understanding between different groups of people was to have them interact with each other—although only under certain conditions, such as having the support of legitimate authorities. (In other words, leaders who express anti-Asian or anti-immigrant sentiment are going to spoil the benefits of intergroup contact.)

We know that intergroup contact was a key component of the success of the gay rights movement. From political activists encouraging everyday gay and lesbian Americans to “come out” to their friends and family to television networks that took risks to expose Americans to gay and lesbian characters in primetime programming, greater exposure to Americans of different sexual orientations helped increase the public’s acceptance of them.

Devos suggests, however, that simple intergroup contact is not the entire explanation for why communities with larger Asian-American representation see less of an implicit association between being American and being white. It’s not just meeting people of Asian-American backgrounds, but seeing them in positions of power that people typically associate with people from European descent.

“You’re seeing people on councils, businesses that are owned by folks of different descents, you’re seeing cultural events,” says Devos. “All of these are coming into a more complex representation of what ‘American’ means.”

So, how is it we can all start to see that breadth of the American identity so that we can associate people who are non-white with being Americans, too?

Devos suggests that when communities come together to commemorate American identity—such as during a July 4th celebration—they make sure that a broad group of people are represented at these events. By doing so, they can actively associate American identity with a range of ethnic groups, so that Americans don’t associate it only with white people.

Through actions like that one, she argues, we can learn to embrace on both conscious and unconscious levels that Americans can come with “many different backgrounds and ideas and values.”