Humans are deeply curious beings. Our lives, economy, and society are shaped so strongly by a drive to obtain information that we are sometimes called informavores: creatures that search for and digest information, just like carnivores hunt and eat meat. What is it that drives our hunger for information? 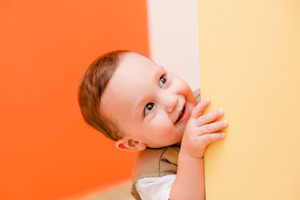 From an evolutionary perspective, there is a clear reason why animals would seek out information: It can be vital to their survival and reproduction. A bird that spent its whole life eating berries from a single bush and never explored its environment could be missing out on a much better food source nearby. Thus, it is not surprising that exploration is common in the animal world. For example, monkeys will push a button at high rates for a chance to peek out of the window, and roundworms do not crawl to a food source directly, but rather circle towards it in a way that gives them the most information about their environment.

What drives animals’ information-seeking behaviors? One possibility is that each individual animal learns over the course of its life that a greater knowledge of its environment leads to rewards like food or other essential resources. However, while this is something we can imagine humans or monkeys learning, it is probably beyond the capacity of roundworms. Furthermore, we see curiosity-driven behaviors in very young animals, before they have had enough experience to learn the association between knowledge and rewards. For example, human newborns look at new visual scenes for much longer than at known visual scenes.

Another possibility is that evolutionary pressures have made information intrinsically rewarding. The reason so-called “primary rewards” like food and sex are pleasurable is because animals that enjoy eating and reproducing are more likely to survive and produce offspring. Evolution has therefore built up a reward system in the brain that drives behaviors that help animals acquire essential resources. Could this same reward system be prompting information-seeking behavior by making animals find new information intrinsically rewarding?

If learning is intrinsically rewarding, the brain should respond to new information in a way similar to how it responds to primary rewards like food and sex. Indeed, neuroimaging studies show that when people are curious about the answers to trivia questions or watch a blurry picture become clear, reward-related structures in their brains are activated. However, since the resolution of neuroimaging is still quite rough, these studies cannot show whether the reward-related structures in the brain actually respond in the same way to information as they do to primary rewards like food. For this we need to study the behavior of single neurons.

Neuroscientist Ethan Bromberg-Martin and his colleague Okihide Hikosaka were the first to find signatures of reward responses to information within single neurons. They designed a task in which monkeys saw two pictures and had to choose one. Then, after a short delay, the monkeys would receive either a large or a small reward. If the monkey chose one of the pictures (the informative picture), it would get a cue that indicated whether the delay would be followed by a small or large reward. If it chose the other picture (the uninformative picture), it would see a cue that gave no information about the upcoming reward. Even though the choice of picture did not affect the size of the reward, the monkeys almost always chose the informative picture, presumably because they were curious and found it rewarding to get a hint about the outcome.

While the monkeys performed this task, Bromberg-Martin recorded activity in their dopamine neurons, which play a crucial role in primary reward processing and in motivating behavior. By increasing their activity in the face of both rewards and cues that predict rewards, dopamine neurons flag rewarding situations and experiences for the rest of the brain. Bromberg-Martin and Hikosaka looked at how the monkeys’ dopamine neurons responded to the pictures and found that activity increased in response to the informative picture and decreased in response to the uninformative picture. The reward-predicting dopamine neurons responded to information in the same way they respond to other primary rewards like food and sex.

Bromberg-Martin and Hikosaka’s study indicates that a core component of the brain’s reward-processing system can motivate animals to seek out information as well as primary rewards. Since both food and information can drive behavior that promotes survival, it makes sense that somewhere in the brain they are processed similarly. However, we would also expect that they be represented differently in other parts of the brain. A good book and a candy bar are both rewarding, but in distinct ways—and if you’re hungry, you are not going to be satisfied by reading the latest bestseller.

With this distinction in mind, neuroscientist Tommy Blanchard teamed up with Bromberg-Martin and colleague Ben Hayden to investigate how information and primary rewards are represented in the orbital frontal cortex, an area of the brain involved in many complex cognitive behaviors, including evaluating rewards. By again recording the monkeys, he found that neurons in this area responded to both information and primary rewards but, unlike dopamine neurons, did not treat these two variables in the same way. For example, an individual neuron in the orbital frontal cortex might increase its activity in response to a primary reward, but decrease its activity in response to information (or vice versa).

Blanchard’s research indicates that primary rewards and information are represented differently in the orbital frontal cortex, in contrast to the midbrain (the home of dopamine neurons), where they are integrated into a single representation. Processing these rewards differently in the more advanced part of the brain may allow for behavioral flexibility—the ability to seek out information in some contexts, but focus on primary rewards in others.

What this body of research demonstrates is that primates really are informavores—information stimulates our brains the same way food and sex do. Yet there are also parts of our brains that differentiate between information and other rewards, allowing for behavioral flexibility and complex decision making.

Many questions still remain about humanity’s innate curiosity. For example, how do reward circuits in different parts of the brain interact with each other? Why are some types of information more interesting to us than others, and why are different people interested in such different things? Let’s hope our curiosity will continue to lead us to a further understanding of curiosity itself!

This article was originally published on Footnote. Read the original article.