Like most siblings, my brother and I would roughhouse when we were younger.  Most of the bouts would stay playful—but sometimes they’d turn vicious. However, when I gave my brother a bloody lip or I banged my knee against the end table, we were quick to calm each other down and make sure it wasn’t anything serious. That doesn’t happen with every sibling—in some relationships that bloody lip can feed a lifetime of resentment. 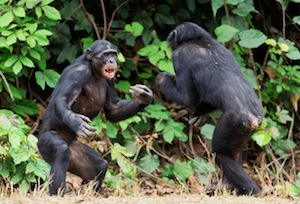 Why were we able to reconcile so easily, when another set of brothers might have stayed at each other’s throats?

Since we were acting like apes, perhaps a new study of bonobos can help us understand our behavior. Frans de Waal and Zanna Clay of Emory University studied distress and consolatory behavior among bonobos after playful bouts at an animal sanctuary in the Democratic Republic of Congo.

Their results, published in Proceedings of the National Academy of Sciences, reveal strong similarities between the emotional development of bonobos and that of human children—especially about the relationship between mothering, emotional regulation, and empathy for others.

What human and ape kids have in common?

Bonobos are quite similar to humans. They’re more likely to walk on two legs than other apes and they have smaller canine teeth, just like us. And they have very rich, complicated, sexually charged relationships with each other, not unlike people.

But their emotional lives and development are still a territory largely unexplored by scientists. We know that in humans, consistent attention to a child’s needs by the caregiver creates a sense of emotional safety and predicts that child’s ability later in life to manage strong emotions and form caring relationships with other people. Orphans or neglected children typically struggle to keep a lid on anger or sadness—and sometimes have trouble showing empathic concern for others. Psychologists call this idea “attachment theory.”

But is this the case for other primates, like bonobos? And how might insight into the emotional lives of bonobos shed light on human development? 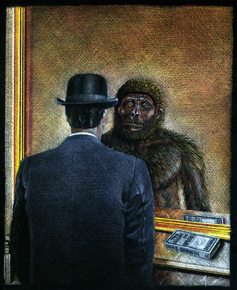 Before Clay and de Waal ever conducted their study, hunters had orphaned many of the bonobos observed by the researchers. That sad fact gave the researchers an opportunity to put attachment theory to the test with bonobos, and see how emotional skills are affected by parenting, and how that in turn affects relationships with others.

The researchers measured three factors. First, how long two bonobos were able to play before things went bad and they started fighting for real, which hinted at their relative social-emotional competency. Then, the researchers assessed the apes’ emotional regulation by their length of post-bout distress and activities like self-scratching, which reveal anxiety. Finally, they looked for any spontaneous comfort-inducing touch, stroking, embracing, and kissing between the two former opponents—especially degrees of responsiveness towards bonobos that were the “losers” of playful bouts.

So who was able to reconcile and who wasn’t? It turns out that bonobos who had been reared by a mother were able to play longer and reconcile faster than those who were orphans. Orphans also tended more to avoid the distress of bout losers than did the mother-reared juveniles.

Clay and de Waal, who is also a research fellow within the GGSC’s Expanding Gratitude project, emphasize that the orphans are behaving in a way that might be perfectly logical, given their situation.

“Social conflicts can be risky, with renewed aggression potentially igniting larger disturbances,” they write. “It may therefore be the orphans’ best strategy to avoid tense scenes, either by remaining distant from the core group or fleeing at the site of trouble.”

But their study confirmed that emotion regulation is an essential part of empathy, in two primates who share 99 percent of the same DNA: bonobos and humans.

Which brings me back to my brother and me. The research suggests that it was our mother’s care that enabled us to endure all those playful shoulder punches and slug-bugs, indicating the ability to give and accept low levels of pain without flying off the handle.

In short, our ability to regulate emotions—an ability nurtured by our parents’ care—enabled us to engage in very intimate behavior that helped us to build bonds and trust. And just as my brother and I emulated my mother’s concern, bonobos who had a mother are more likely to offer care and to have shorter periods of distress when being the “loser” of the playful scraps.

Most parents don’t like to see their kids fight. But just remember, mom and dad: Siblings will take care of each other if they’ve been taught how.