We’ve all seen the images of violence coming from Ukraine, as the Russian invasion continues. 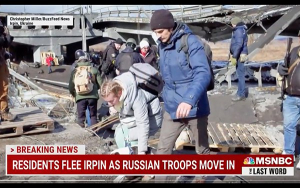 They’re hitting Anastasiia Timmer harder than most of us, because she was born and raised in Ukraine. Now a criminologist at the California State University, Northridge, Timmer studies why people commit acts of violence.

“Growing up in Ukraine and learning our history shaped my desire to better understand causes of behavior, beliefs, and generational trauma,” she says.

She and her team of Ukrainian, Russian, and American researchers went to Ukraine in 2017, after the Russian invasion of the Ukrainian provinces of Crimea and Donbas. At that point, as Timmer points out, “people of Ukraine were suffering from war for many years.” Their goal was to understand how those years might have affected civilian relationships and their sense of right and wrong, especially when it came to embracing violence as a solution to both interpersonal and international conflicts.

Going house to house in the Ukrainian cities of Kharkiv and Lviv, researchers interviewed almost 1,300 participants face to face, and gave them questionnaires with more morally sensitive questions, to be filled out and handed back in sealed envelopes.

The researchers also explored how frequently the participants were exposed to news about the war, and if they knew someone who served, or was killed or injured, in it. It’s important to note that three-quarters of the study participants had not witnessed combat. They followed the conflict in nearby Donbas through TV, radio, the internet, and newspapers, and perhaps through firsthand accounts of friends and relatives who did participate in the fighting. Finally, they asked participants about how much stress and depression they felt on a daily basis.

In a paper published last month in Peace and Conflict: Journal of Peace Psychology, Timmer and her colleagues describe the results. In fact, they found that people who are more exposed to war do seem to have a greater tolerance for other kinds of violence—a relationship that appears to be shaped by stress and depression.

War, the researchers write, “creates and exacerbates difficult life situations,” like financial problems or uncertainty about housing—and this appears to make people more tolerant of violence. Something similar is true of depression. A great deal of other research suggests that “people who report more depressive symptoms are more likely to perceive violent acts as morally acceptable.” Their study of Ukraine found that link, as well.

In war-affected countries, they write, this creates a vicious cycle: People who are exposed to news about nearby war are more stressed and more likely to be depressed, which affects their beliefs about violence. Research does suggest that post-war societies are more likely to experience criminal violence, like domestic abuse, muggings, and murder.

Another study by Timmer and her colleagues, published in the same month by the British Journal of Criminology, used the same surveys to uncover that people who are more exposed to war are more willing to personally harm another person. As with the other study, the more stress or negative emotion a person felt, the more likely they were to believe in violence as a solution to conflict.

Taken together, these studies suggest that violence does indeed beget violence, as exposure to war makes other kinds of brute force more acceptable and even more likely.

In the paper for Peace and Conflict, Timmer and her colleagues outline a number of ways societies might be able to stop violence from spreading. Unfortunately, Timmer argues, there’s little anyone can or should do to limit exposure to news about the war. “Russia committed unthinkable atrocities, and the world needs to know and understand the pain of war and genocide,” she says. “Understanding the painful reality of war will help people around the globe unite and make sure it will not happen again.”

At the same time, however, “we need to help each other and all those exposed to war in different ways,” the researchers write. They suggest trying to simply reduce daily stress among civilians as much as possible, which “may involve stress management counseling helping war-affected people manage their everyday problems including economic strain, family conﬂict, etc.” Policymakers should also prioritize mental health services, which are not well-developed in countries like Ukraine—and often carry a lot of distrust and stigma. A public health campaign could help make people more receptive to getting help.

Although that might be a tall order for societies in the midst of conflict, “we should provide people watching the news with resources to deal with stress, negative emotions, and depression,” says Timmer.

The United States recently announced committing an additional $1 billion in military aid to Ukraine. Studies like Timmer’s suggest we should consider another kind of aid, for mental health services and efforts to reduce day-in-day-out stress for civilians. While that kind of aid might not directly help Ukraine win the war, it could help civilians live in a safer society.