Every parent wants to raise a kind, helpful child. But how?

A recent study suggests it might be easier than we think. In fact, according to the study’s authors, humans have a strong predisposition toward altruism, evident from the time they’re infants. All adults need to do is give kids some subtle, gentle encouragement, and they’ll be on their way. 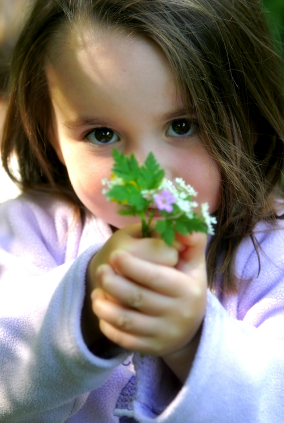 In the study, conducted by researchers at the Max Planck Institute for Evolutionary Anthropology in Germany, an experimenter showed 60 18-month-old kids one of four different sets of photos (see below). In the foreground of all the photos was a familiar household object, like a red tea kettle. But the background was different in each of the four sets.

After the children viewed all the photos in their set, the experimenter left the room and in walked another experimenter who “accidentally” dropped a bundle of sticks. The researchers observed how many of the kids in each of the four conditions spontaneously tried to help pick up the sticks.

The researchers wanted to see whether children would be more likely to help after seeing the photos with the dolls facing each other in the background. They note that altruistic behavior often seems to be stimulated by a sense of affiliation and commitment to a larger group, and they hypothesized that conveying this sense of affiliation between people, even very subtly, would be enough to boost the frequency of kind, helpful—or “pro-social”—behavior. 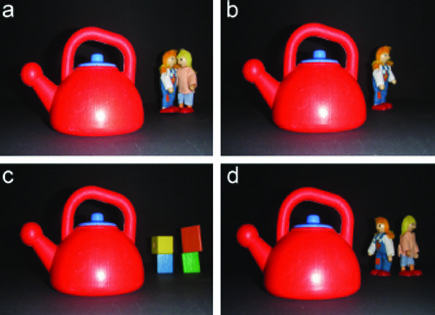 An example of the four types of photos the researchers used.

The children were equally likely to help if they’d seen photos with the single doll, the back-to-back dolls, or the blocks in the background. But amazingly, after seeing photos in which the background dolls were facing each other, they were three times more likely to help.

Because the kids were more likely to help when the dolls were facing each other but not when they were back-to-back, the researchers conclude that it was the subtle hint of affiliation that stimulated the acts of altruism, not the mere presence of two dolls.

The results, published in Psychological Science, offer grounds for optimism to parents, educators, and anyone else hoping to encourage kids to share and be kind—and perhaps offer a bit more help around the house.

My deep consideration is that we need to educate our kids technically.
I.e. my daughter is only 4 years old but she can use computer, yesterday she managed to uninstall itunes mac, hahaha