We all know that it feels good to feel connected to other people—indeed, research has even linked social connections to happiness, health, and a longer life.

But a recent study suggests that our feelings of connection don’t just make us feel good; they also make us do good. 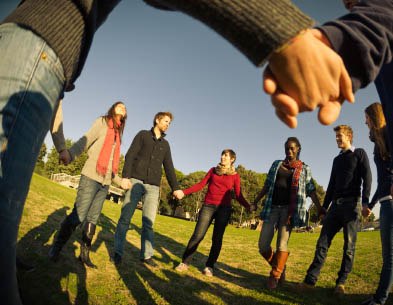 In the study, researchers tried a few different ways of making people feel connected to others, testing to see whether such feelings of “relatedness” motivated those people to perform kind, helpful—or “pro-social”—acts. Prior research has suggested that this sense of connection is one of three ingredients people need to really thrive in life; the other two are feeling capable of achieving their goals (known as “competence “) and feeling in control of their own actions and decisions (known as “autonomy”).

In one experiment, the researchers had participants read words associated with social connection (e.g., community, connected, relationship), then asked them how much they intended to volunteer for a charity. The results show that people were more willing to volunteer for a charity after reading those words than they were after reading a series of other, neutral words (e.g., book, lamp, shoe).

They were also more likely to want to volunteer after reading the social connection words than after reading words that evoked autonomy (e.g., freedom, choice, preference) or competence (e.g., skilled, expert, competent).

A second experiment suggests that these positive effects go well beyond volunteering. The researchers had participants write about a time that they felt a close bond with someone else, bringing to mind that feeling of connection. Then they asked how willing the participants were to perform five pro-social actions over the coming weeks, including giving money to charity and going out of their way to help a stranger in need.

Just thinking about their close connection boosted people’s altruistic impulses: After writing about their relationship, they showed a stronger desire to help others than they did after writing about feeling competent, autonomous, or just after answering some banal questions (e.g., “I think that the color blue looks great on most people”).

And it seems like these feelings of connection do more than encourage good intentions; they also spur positive actions. In a third and final experiment, participants either read words evoking social connection or read neutral words, just like in the first experiment. Afterward, they were given the chance to anonymously donate some of the money they earned for participating in the study to the British Red Cross, which they were told was working with the researchers.

Nearly half of the participants who had been reminded of their social connections donated to the Red Cross, whereas fewer than 20 percent of the other participants did.

Although previous studies have suggested a link between altruism and feelings of relatedness, this study is the first to find that inducing those feelings can directly cause people to be kinder and more generous.

According to the researchers, their findings highlight the basic human need for belonging. In their paper, published in the Personality and Social Psychology Bulletin,  they point to other research showing that feeling socially connected reduces aggression, whereas feeling excluded increases aggression and reduces pro-social behaviors.

Taken together, they argue, these findings suggest that helping people connect with others doesn’t only benefit their own health and well-being but could benefit society as a whole. They call for more research to explore precisely how fostering social connections can boost pro-social behavior.

“Such research could promote simultaneously individual welfare and the welfare of others,” they write, “in a way that would challenge the assumption that there is some kind of conflict between the two.”

Someone needs to tell these researchers that they are only, oh, 2,500 years behind the curve. The Buddha knew long before them that the cultivation of loving-kindness (Metta Bhavana) was essential for personal happiness. The kinds of exercises commonly prescribed by Buddhist practitioners are strikingly similar to the tasks performed in these studies, including the generation of warm feelings towards others and repeating affirmations such as, “let all beings be well, let all beings be safe, let all beings be happy.”

Feeling “connected” makes us all feel good.  As a mother of 4, my connection to other stay at home moms, moms of multiples, etc. helps me to not feel alone in my daily responsibilities.  I believe it’s the same for our children.  Whether we put them in daycare, preschool, Sunday school or vacation bible school, these are all ways for them to develop relationships with other boys and girls and help them to feel connected to other children with similar interests.  Those connections do help me “do good”.  I love these moms who support me and therefore I want to support them back.

This is my favorite one blog which i have bookmarked in my internet explorer to visit regularly.This is

I have read in some place that when you are helping another person, your “fight or flight” system is calm and relaxed. when your body is relaxed it works better and you have more chances for a longer and happier living.
IVF
So be good 😊

When nobody gives, where do we get help from? Greedy and selfish people often willingly neglect the fact, that they abuse the social connection that we humans build between us. If everybody would act selfish and stop helping and giving to others, then nobody will achieve more than what he can do by himself. With his own hands. (That means working with them, not telling others how to do stuff). But today people only think as far as they can grab, the net-benefit of a helpful society is not seen. Even more, media, corporate america and streetlife tells you to only help yourself.
I don’t know how to stop that.