The Golden State Warriors are a Greater Good team.

I say that not only because they play in Oakland, just a few miles from our office. Nor because several of our staff (myself included) have been known to skip out of work early to cheer them on. Nor even because our faculty director, Dacher Keltner, sat in on a couple of Warriors practices earlier this season. 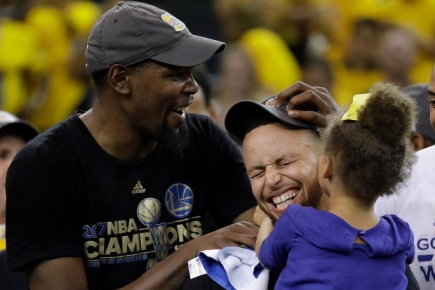 Kevin Durant (left) and Stephen Curry of the Golden State Warriors celebrate with Curry's daughter after winning the 2017 NBA Finals.

No, I say that because throughout their dominant run across the NBA regular season, playoffs, and Finals, they preached and played by Greater Good values.

Indeed, Warriors Head Coach Steve Kerr has deliberately shaped the Warriors’ team culture around four core values: joy, mindfulness, compassion, and competition. That last one is a no-brainer for any professional sports team, but the first three are less conventional—and they obviously resonate with our work here at the Greater Good Science Center.

When the Warriors reclaimed the NBA championship from the Cleveland Cavaliers earlier this week, those values took center stage. From their postgame interviews, as well as their play during the finals and their season as a whole, I took away three lessons that, according to Greater Good science, feel just as important to finding satisfaction in life as they do to finding success on the court.

1. Good things happen when you focus on the present.

Finals MVP Kevin Durant has been one of the top players in the NBA for a decade. But his consistently jaw-dropping performance in the Finals—including the most clutch shot of the Warriors’ season—brought him to a new level of greatness. What made the difference?

“I just tried to stay in the moment the whole series, and I think that worked for me,” he said after Game 5. “I remember plenty of times throughout my career, I continued to look in the past or look ahead, and not stay in the moment. And this series, I just stayed in the moment.”

That sounds a whole lot like mindfulness, the moment-by-moment awareness of our thoughts, feelings, sensations, and surrounding environment—and one of the Warriors’ core values.

“I just tried to stay in the moment the whole series, and I think that worked for me.”

While mindfulness is often seen as something you practice during formal meditation, many experts, including famed author and mindfulness teacher Jon Kabat-Zinn, stress that it’s better thought of as a state or quality you can bring to any activity. That could be taking out the garbage, enjoying an ice cream cone, or shooting a three-pointer with LeBron James in your face. The key is that you’re attuned to the present moment, not dwelling on the past or lost in the future.

Research has linked mindfulness to a whole host of benefits, from better health to more positive emotions to more compassionate behavior. While I bet Durant wouldn’t mind any of those, perhaps most relevant is the research linking mindfulness to sharper focus and less distractibility. And as we have reported in the past, studies have even linked mindfulness to concrete improvements on the basketball court, such as better defense and a higher free throw percentage.

Other teams, like the Seattle Seahawks and Chicago Cubs, have embraced mindfulness in recent years. Perhaps not coincidentally, those teams won the Super Bowl and the World Series, respectively. Add Durant and the Warriors to that list of mindful champions.

In his post-game press conference soon after vanquishing the Cavaliers, Warriors power forward Draymond Green was asked how it felt to share this championship with some NBA veterans, like JaVale McGee and David West, who were new to the Warriors this season and had never won it all.

“To see them celebrate that,” he said, “was an even better feeling than just celebrating it [myself].”

Draymond was onto something. In fact, research suggests that people experience greater pleasure after succeeding as part of a team than they do on their own. That might be at least partly because, in certain situations, seeing other people smile seems to activate the same brain regions as when you smile yourself, flooding you with happy feelings.

Researchers call this experience “empathic joy”—feeling another person’s happiness as your own. And they’ve found that it doesn’t just carry benefits for NBA champs: A recent study found that when teachers experienced empathic joy with their students, those students later scored higher on standardized tests.

3. Cooperation is key to getting ahead.

It has become something of a cliché to call the Warriors an “unselfish” team—this is, after all, a team whose motto for the past several seasons has been “Strength in Numbers.”

But that ethos was put to the test this season with the arrival of Durant, a four-time NBA scoring champion, who joined last year’s scoring leader, Stephen Curry. Would both of those superstars—along with All-Stars Klay Thompson and Draymond Green—be able to share the ball, and the spotlight, for the good of the team?

The statistics speak for themselves: They earned a league-leading 67 wins—and led the league in assists, with 20 percent more than any other team. Curry took about 10 percent fewer shots per game than he had the previous season; Durant took 14 percent fewer. And, unlike last season, the Warriors finished as champions.

“We got an unselfish team who just wants to win,” said Klay Thompson. “They don’t care who gets the stats or the accolades.”

Durant said he and his teammates embraced a message preached by Warriors “sixth man” Andre Iguodala: “It’s all about the group.”

And research suggests they were wise to do so. Indeed, studies across species—from ants to fish to bats to humans—have found that groups whose members sacrifice their own personal self-interest for the good of the group are more likely to survive, and thrive, in competitive environments.

The evolutionary edge we get from cooperating might explain this provocative finding by Harvard researchers David G. Rand, Joshua D. Greene, and Martin A. Nowak: When people are pressed to make snap decisions between cooperating and competing, they choose to cooperate. “Although the cold logic of self-interest is seductive,” they write, “our first impulse is to cooperate.”

While the 2016-17 Warriors could arguably compete with any team from NBA history, this season they proved that the best way to compete is to cooperate.

“That’s what, to me, carries teams over the top,” Kerr told the sports website Bleacher Report soon after the Warriors defeated the Cavaliers. “A lot of teams have talent, and obviously we have great talent. But when that talent is committed to the greater good . . . that takes you over the top.”