In the study, published in November in the Journal of Personality and Social Psychology, participants were trained in “loving kindness” meditation, a form of meditation focused on both cultivating feelings of warmth and caring and extending those feelings toward oneself and others. After completing an initial survey that measured their social and mental well-being, the participants, all employees at a large technology company in Michigan, attended weekly meditation trainings and meditated at home at least five days each week, using guided meditations on a CD. Every day, they recorded the emotions they were experiencing throughout that day, as well as their “meditation, prayer, or solo spiritual activity.” 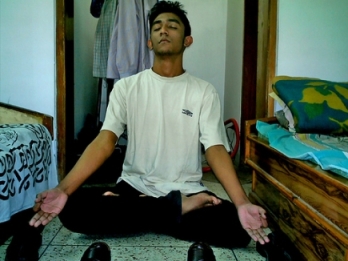 Fredrickson and her colleagues found that over the nine weeks, participants reported an increase in the amount of positive emotions they experienced, including love, joy, and contentment. When the participants took another survey after the training ended, they appeared to be more satisfied with their lives and showed fewer depressive symptoms than before the meditation training began.

The researchers found that it took a few weeks for participants’ positive emotions to increase, and the increase each week was small. But as those positive emotions grew, the increases were associated with other personal improvements, such as greater feelings of self-acceptance, more positive relations with others, and improved physical health. In turn, the researchers found that those personal improvements enabled the meditation group to become more satisfied with their lives.

Fredrickson sees these results as evidence for what she has termed a “broaden and build” theory of positive emotions, whereby, over time, positive emotions help people broaden their outlook on life, build personal resources, and subsequently enhance their overall well-being.

“Just like exercise and eating nutritious foods can be considered an investment in your future well-being, paying attention to today’s emotions also shapes your future well-being,” she says. “It’s not just about feeling good in the moment. Feeling good actually sets us on healthy paths of growth. Knowing this might make us each value and cherish moments that spark positive emotions more than we typically do.”

It takes some time to start to feel some diferences. But if we continue meditating we will see the results happen. Great post.