Children’s early developmental accomplishments are supported and celebrated with gusto. We note the date of their first words and send photos to grandparents of first steps. We “scaffold” learning by talking in short, simple phrases that toddlers can understand. And we minimize risks by putting gates across stairwells and clearing coffee tables of breakables.

But our celebratory, supportive attitude toward growth seems to break down when our children approach adolescence, and their behavior becomes perplexing, frustrating, and/or frightening to us. It’s easy to feel a loss of control as teens push against us, argue with us, replace us with peers, make bad decisions, and get into trouble. 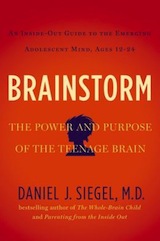 Daniel Siegel, psychiatry professor at UCLA and director of the Mindsight Institute, says there’s a better way—and it starts with knowing what the teen brain is trying to accomplish. In his new book, Brainstorm, Siegel argues that if we really understood what was happening developmentally with teens, we would continue to celebrate their growth while mitigating their risks.

The view that changes in teens’ behavior are due to “raging hormones” is outdated. The real mechanisms driving teens’ development have become apparent only in the last decade or so, with the advances in brain science and imaging. Scientists are beginning to understand that the human brain starts its own “remodeling” project beginning just before the onset of puberty in order to start preparing our young for adulthood.

What are those major changes? For one, the brain starts to become more efficient by “pruning” the number of cell bodies (Siegel calls it “specialization”), while at the same time increasing the connections among them; it’s both a major housecleaning and a reorganization of contents. It’s also an incredible opportunity for creativity—a “golden age for innovation,” Siegel says.

Second, different brain systems come online at different times. During the early teen years, the social-emotional circuitry of the limbic system becomes amplified, and teens suddenly feel their own feelings more intensely, are more sensitive to others, and have “higher highs and lower lows.” But the seat of their self-control, the frontal cortex, doesn’t fully consolidate until the mid-twenties. As a result, teens’ self-management skills—decision-making, self-awareness, abstract thought—aren’t quite up to regulating all of the changes. That probably won’t come as a surprise to any parent of a teenager—but keep in mind that we haven’t begun to explore how much we might be able to influence teens’ self-management through targeted skill development and better “integration” of the systems, which Siegel shows us how to nurture.

I give high marks to Siegel for challenging ageist attitudes toward teens and positively reframing the teen years. He writes, “the work of adolescence—the testing of boundaries, the passion to explore what is unknown and exciting—can set the stage for the development of core character traits that will enable adolescents to go on to lead great lives of adventure and purpose.” In other words, emotional sparks, creativity, and willingness to take risks are necessary to launch into adulthood.

So what is the teen equivalent of baby-proof latches and gates over stairs? Siegel takes the interpersonal neurobiology work that he has developed in countless books, talks, and workshops and applies it to raising teens. HIs central insight is that acknowledging the connections between behavior and emotions helps both parents and kids to gain insight into their own thoughts and feelings, as well as other people’s emotional states. This is what he calls “Mindsight.”

First, he advocates maintaining close connections and healthy attachments through the teen years. Kids develop in the context of relationships, and our actions in that relationship affect how their brains get rewired, particularly in this period of rapid reorganization. This suggestion echoes study after study in which teens say that they want to keep close relationships with their parents.

Second, Siegel advocates the skills of Mindsight and staying present, which he spells out in each chapter through exercises and examples. My favorite tip: An emotion takes 90 seconds to rise and fall, so when parents get triggered by teens, parents should pause, breathe, wait the 90 seconds, and then choose a calm response that will scaffold a teen’s learning.

The book isn’t perfect. Siegel’s attempt to cover the entire age range from 12 to 24 is too ambitious, and the book becomes a bit muddled. The issues at ages 12-14 are very distinct from the ones at 20-24, and I wished that Siegel would have taken the extra care to clarify the differences. It may not matter—maybe Mindsight techniques apply irrespective of age—but Siegel doesn’t provide the research to support that thesis.

Siegel claims that the book is not merely for parents but also for teens, yet that awareness seems to wane as the book progresses. The teen I gave it to graded its relevance for teens with a B minus. In addition, Siegel’s enthusiasm runs a little far when he claims that the source of parents’ tensions with their teens may be their own “deep longing for these very features [of adolescence] they themselves may have lost” and that if parents could only recapture that vitality, all would be well. Personally, I would never want to return to the volatility of early adolescence. Siegel frequently draws from his clinical practice—patients who are struggling—and does not describe all the ways that the majority of teens and families make it just fine through this period. And skeptics beware: There are no references in the book.

Yet Brainstorm will still be a great help to adults who parent or work with teens. I love the Mindsight work and think it combines the best of brain and developmental science with clinical work on parenting and relationships.

I agree with Siegel: It’s really time to start celebrating and supporting the development of teens! We’ll know we’ve made progress when we call up the grandparents to exclaim about our teens’ newfound passions, risk-taking, and creativity.