My coaching client Eileen has long had a dream of having her own consulting business. She has everything she needs: the technical skills to create an online presence, industry connections, social media followers, and substantive expertise in her field. When she came to see me, she was angry and frustrated with herself. Her goal for the session was to “heal the block” so she could move forward with her plans. 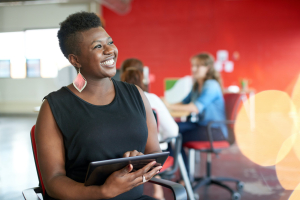 In my years of coaching, writing, and teaching about the creative process, I’ve come to develop a deep respect for it. When I spoke to Eileen, I discovered that right then, at that moment in her life, she was having conflict in her marriage, her father was dying, and she was working full-time at an extraordinarily stressful job. Despite all this, Eileen felt it was the right time for her to create a new business.

Our culture has long viewed creativity in ways that don’t serve us. On one hand, we view it as frilly and unnecessary—something we do for fun in our free time. And on the other, like Eileen, we think of it as a tool to help us build careers, make more money, and establish a name for ourselves in the marketplace. Neither approach is helpful.

To creatively flourish and produce our best work, creativity requires the same thoughtfulness, time, and attention as our other intelligences. Here are a few ways to maximize your creative potential, whether at home or at work.

Eileen’s story demonstrates that one of the biggest blocks to creativity is having our psyches clogged up with unfinished business and other demands on our energy. It’s both common sense and well-researched that we humans can’t adequately attend to too many things at once, and Eileen clearly had several things competing for her attention. And when we’re under stress, we have even less attention to devote to cognitive tasks like creativity.

The reason Eileen was adamant about starting the consulting business was because she disliked her job and wanted a new one. But our best creative work is most likely to be intrinsically motivated, rather than motivated by extrinsic rewards like money.

In an article I wrote with psychologist Mihaly Csikszentmihalyi, we discussed the importance of intrinsic motivation on both learning and creativity. When we’re intrinsically motivated, we do an activity because it’s inherently satisfying, not for an external result. In the case of creativity, we’re inspired to act for the fun or challenge involved rather than because of external pressures or rewards.

I’m sure you’ve experienced times in your life when you were on fire with inspiration. That kind of internal fire (intrinsic motivation) is not to be dismissed. Your loves and passions are what inspire you to produce great things. Your passion is what keeps you going when you encounter resistance or difficult people, or experience setbacks or rejections. Valuing your heart’s longings will give you the courage to try out new directions and bravely explore new terrain. When your heart is moved and inspired, you’ll be a force to be reckoned with.

3. For your creativity to flourish, it wants your biggest vision

Here’s another thing I often see with my clients: They’re afraid to allow themselves their full vision, so they make it smaller. For example, a nurse named Janet wanted to start a consulting business to introduce the idea of holistic care into the nursing field. But Janet was afraid of being too “out there” with her holistic therapies and alternative ideas. She was concerned she’d be rejected (or laughed at) by her peers. So, she limited her vision.

Janet decided to settle for a project that would still be well within the margin of acceptability. She would present a workshop for nurses that had a few concepts lightly sprinkled in but was pretty much the standard material nurses were used to digesting.

What happened next? She lost her motivation. Janet’s true vision was bigger than that.

Our minds often get anxious when diving into new and unknown things, but research suggests that this is precisely when creativity has a chance to flourish. For example, in several different studies involving video games, participants were more creative when the game was open-ended rather than defined. When tasks, projects, and visions are open-ended—when we allow ourselves to dream—we are free to explore, experiment, follow intuitive hunches, and learn from what presents itself.

4. Creativity is nourished and fed by beauty

Research suggests that nurturing environments (and people) inspire the creative. One such study comes from neuroscientist Elizabeth Gould, who discovered that natural and beautiful environments “feed” the brain and support the production of new neurons, while ugly, unstimulating environments stop the brain’s generative process.

If you’re procrastinating, unmotivated, or generally “blah,” when was the last time you surrounded yourself with beauty? The power of beauty is real. Dwelling in it will shift your mood and inspire you.

I have a client named Mary who’s a gifted artist, and her paintings are deeply sensual. As a child and pre-teen, Mary attended a strict Catholic boarding school where she was punished for expressing feelings for boys or dancing in a sensual way. Mary understandably struggles with these two parts of herself—the part of her that wants to be prim and proper to please her Irish mother and the nuns, and the creative part of her that is wildly sensuous.

Like Mary’s, your deep creativity is subversive. It doesn’t care what your mother thinks, what your friends believe, or the institutional norms of your career. Creative terrain lies OUTSIDE of the institution that you work for, the social system that you grew up in, or what’s currently trending on social media. Mary’s creative fire doesn’t care a whit about her mother’s approval.

In a study of MacArthur Genius Grant recipients at the University of Michigan, husband and wife researchers Michele and Robert Root-Bernstein discovered that many highly creative individuals spent time in their childhoods creating their “own worlds,” which the authors termed “paracosms.” In these made-up fantasy worlds, these future creative geniuses were free to create new languages, rules, and social systems. Later, looking back on their childhood play, the MacArthur recipients often credited these made-up worlds as instigating factors for their creative work throughout their life.

6. Not knowing is the starting point for the creative

I worked with an artist named Carol who told me she was creatively blocked. She’d been working on a large project that had been at a standstill for months. “I’m just not getting where it’s going! I can’t see it,” she grumbled.

In our session, the metaphor of a flowing river spontaneously showed up. When Carol and I stepped into the wisdom of this metaphor, it was clear that the river was happily flowing—it had no blocks or obstacles. I said, “That’s right, you don’t know where you’re going. You’re flowing. But if you’re a river, it feels fine to not know where you’re going, right?”

After a moment of reflection, Carol was astonished: “Yeah, it does feel fine. I’ve been feeling blocked, but I see that it’s not so much blocked, it’s that I don’t know. I thought I was stuck because I didn’t know where I was going.”

In his book Spirited Leading and Learning, organizational change expert Peter Vaill writes that the essential starting point of artistic consciousness is acknowledging that something is “more than I can possibly know.” In other words, “knowing” is not a creative state. It’s when we don’t know that we’re open to new information, ideas, and experiences in ways that we aren’t otherwise.

Terry Gross once interviewed the esteemed filmmaker David Lynch on her radio program “Fresh Air,” and she asked Lynch something about what he does when he makes a movie. The filmmaker paused for a moment and then said, “You know, Terry, when I make a movie, I don’t know what I’m doing.” I’ve always loved that. Our minds want to “know” so very badly. But let’s give ourselves permission to not know. As the painter Edgar Degas once said, “Only when he no longer knows what he is doing does the painter do good things.”

Creativity is an intelligence. When we respect its needs—for freedom, not knowing, beauty, a big vision, intrinsic motivation, and space—it will flourish.