For most of human history, people have believed that the imagination is inherently inscrutable, an impenetrable biological gift. As a result, we cling to a series of false myths about what creativity is and where it comes from. These myths don’t just mislead—they also interfere with the imagination. 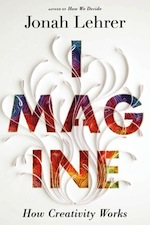 The deep mysteriousness of creativity also intimidated scientists. Most cognitive skills have elaborate biological histories, so their evolution can be traced over time. But not creativity—the imagination has no clear precursors. This doesn’t mean, however, that the imagination can’t be rigorously studied.

Today, we can see the massive network of electrical cells that allow individuals to form new connections between old ideas. That’s why my book Imagine: How Creativity Works begins with the material source of the imagination: the three pounds of flesh inside the skull. The imagination can seem like a magic trick of matter—new ideas emerging from thin air—but we are beginning to understand how the trick works.

We now know that creativity is not a single gift possessed by the lucky few. It’s a variety of distinct thought processes that we can all learn to use more effectively. Here are five tips from the many in the book for reaching your full creative potential.

1. Get Stumped
The act of being stumped is essential to the creative process because we need to be convinced that there is no solution, that we will never solve our problem, never invent the next big thing, or finish writing the novel. We need that feeling of frustration because it leads us to a moment of eventual insight. The final, Aha!  In a variety of brain-mapping studies, scientists discovered that when faced with a problem, the left hemisphere of the brain—the side of the brain typically associated with analytical problem solving—got right to work. However, the tricky problems the scientists developed quickly wore out the left-brain thought process. The subjects became frustrated and complained about the unsolvable problems. This frustration was crucial because it signaled a need for an alternative method, and scientists saw a shift in activity from the left side of the brain to the right side—the more “creative” side—of the brain. Once activity shifted to the right side, subjects often experienced these moments of insight, a flash of activity in the brain resulting in them bolting upright in their chairs as the answer appeared to them. They had to get stumped in order to get creative and solve the problem.

2. Stick With It
Although giving up when you’re feeling frustrated and stumped seems like a good idea, perseverance and working through the problem is crucial to the left brain transferring activity to the right brain, which hopefully will result in a creative breakthrough. These qualities, perseverance and passion for long term goals, comprise grit, and no artist, no writer, no inventor would be successful without it. Grit is the quality that forces you to make sacrifices for the sake of your passion, to work long hours or keep practicing even when practice isn’t fun. Studies have shown that grit is one of the most important predictors for success, because no one is talented enough to not have to work hard.

3. Take a Break
Although persistence is key to creative breakthroughs, sometimes taking a break, backing off and refocusing, can help alter your mood and help you achieve a more creative state of mind. Studies show that a relaxed mind, soothed by increased alpha waves, is more likely to see the answers that were blocked by a frustrated state of mind. Relaxing the mind and letting the alpha waves flow is easier than you might think. Taking a warm shower, away from the buzzing cell phones and incoming e-mails, can be a great relaxer, both for body and mind. Studies also show that having a more positive outlook—simply being happier—can increase creativity. If you’re stuck in the middle of a difficult problem, take a break from it to watch a funny video on YouTube. Although it might feel unproductive to stray from the task at hand, in the long run these breaks are proven to increase productivity and creativity. That’s why so many successful corporations—from 3M to Google—have adopted breaks for pursuit of outside projects and new ideas as a crucial part of the work day.

4. Become an Outsider
For the amount of writers who flock to Paris, you’d think we’d be stuck with an abundance of novels narrated by baguette-eating protagonists lounging in chic cafés. But instead, these writers return with cutting literary essays or novels set in their own American hometowns. They don’t go to Paris to write about Paris; it’s the getaway, and experiencing life as an outsider, that helps them create. Studies show that travel is one way to enhance creativity because it encourages thinking outside of your normal self. Even little things like not knowing whether to tip a waiter or how to say “thank you,” stimulate the mind and make you more observant of what is outside of what you already know. But “outsider creativity” doesn’t mean that you have to go to Paris if you are searching for a creative breakthrough. It can be a state of mind; it’s the same sentiment as telling someone to “sleep on it” when they are struggling to find a solution to a problem. Waking up with fresh eyes and becoming an outsider to your own problem can be hugely beneficial to solving it.

5. Channel Your Inner Seven-Year-Old
In a recent study, a psychologist assigned a few hundred undergraduates to two different groups. The first group was given the following instructions: “You are seven years old, and school is canceled. You have the entire day to yourself. What would you do? Where would you go? Who would you see?” The second group was given the exact same instructions, except the first sentence was deleted. As a result, these students didn’t imagine themselves as seven-year-olds. After writing for ten minutes, the subjects in both groups were then given various tests of creativity, such as trying to invent alternative uses for an old car tire, or listing all the things one could do with a brick. Interestingly, the students who imagined themselves as young kids scored far higher on the creative tasks, coming up with twice as many ideas as the other group. It turns out that we can recover creativity we’ve lost with time. We just have to pretend we’re little kids.

I bought this book immediately after hearing an interview with Jonah Lehrer on NPR, and read the entire thing in a few days. So compelling, and such fantastic, practical tips about how to pump up creativity and lay the foundation for freeing insights in our daily loves. I felt more creative just reading about being creative! Thank you!

I also find that well-travelled people are less stuck in narrow, isolated mindsets. The finding that teens are less likely to identify as creative was interesting as well. I wonder what happens when people form ideas of career. Once teens start to idolize artists, do they think they must define themselves as professional artists before they earn the claim to creativity?

Having just finished “Imagine” it was rewarding to be reminded that “brilliance” still requires hard work, amongst a variety of other factors.  In that way when I admire the brilliance in others I also have to consider all of the effort involved.

I liked the part in which you said about taking a break.It is very true about me as more than once I have faced problems and I wanted to finish it hard. But the more I tried the more I made mistakes. And when I took a break my mind got refreshed and I was able to solve my problem quite easily. However thank you for such good inf with us and I hope eager for more of the same.