Are you as creative now as you were when you were a child? 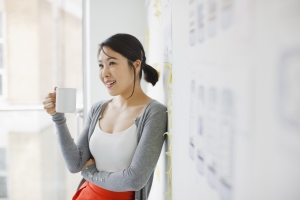 For many people, the answer is no. As we move into adulthood, we are often conditioned to be more serious and to conform to the norms of society. We lose some of the freedom and playfulness that inspired our wacky kid ideas. At the same time, our jobs seem to demand more and more new ideas, creativity, and innovative thinking.

For the past 45 years, I have been studying what contributes to the creativity of adults and children alike. From 10 year olds making collages to R&D scientists dreaming up new products, I’ve observed what kills creativity and what helps it thrive.

We often think of creativity as a trait—something we all have more or less of—but my work has identified a missing piece of the puzzle: how our social environments influence our ability to be creative. The upshot is that whoever we are, we can find ways to reignite creativity in ourselves and in our organizations.

What motivates us to be creative?

Creativity is a novel and appropriate response to an open-ended task or problem. When someone is doing something creatively, they are doing it differently from the way it has been done before, while fulfilling the goal of the activity at hand.

When I first began studying creativity in the 1970s, most creativity researchers essentially believed that there were two types of people: creative geniuses, and all the rest of us. Their studies focused on what distinguishes those creative geniuses, in terms of their special characteristics and traits. For example, highly creative people (those who consistently produce work recognized as creative) tend to have experience, expertise, and skills in a particular domain, and sometimes in multiple domains. They can also think in distinct ways: They see and understand unusual phenomena, take on new perspectives, and persevere in the face of challenges by exploring new approaches and finding unique solutions to problems.

But I had a hunch that there was more to the story than special skills and traits. And I didn’t believe that creativity was limited to only the geniuses. So I organized an “art party” for kids at my apartment complex in Palo Alto, California.

In my study, children attended one of two art parties with games, snacks, and art activities, ending with the key activity: the creation of “silly” paper collages. Kids who had been randomly invited to the Saturday party were told that there would be a random raffle for three toy prizes after they finished making their collages. But kids who attended the Sunday party were told that the three adults running the party would judge the collages to pick three winners, who would get their choice of toys as a prize.

Fine art students then individually rated the creativity of each collage, without knowing which ones were made on which day. The judges’ ratings revealed that the children who weren’t competing for rewards made significantly more creative collages than the other children.

This study suggested a crucial component of creativity: our social environment. Simply stated, “extrinsic” motivators—things outside ourselves and the activity that motivate us, such as competition, evaluation, and rewards—can dampen kids’ creativity.

While there were no differences in the creativity of the first poems, there were significant differences in the second poems. Poems written with extrinsic motivation top of mind were significantly less creative than those written in the other two groups. Here, simply thinking about extrinsic motivators seemed to dampen creativity, even when those motivators weren’t present at the time.

After conducting several similar studies with children and adults, my collaborators and I were able to identify six aspects of social environments that can kill creativity:

Are rewards always bad for creativity?

All my research was pointing to the idea that external motivation undermines creativity. But then an unexpected result in one of my studies caused me to refine my thinking.

In a series of studies I conducted with Beth Hennessey, we asked kids or adults to complete an activity—but as they were doing it, we surreptitiously made something go wrong. Some participants got to choose what they would do next: We invited them to either leave and continue on with their day, or complete a different activity that would fill up the rest of their scheduled time. Others weren’t given a choice: We simply told participants that the first activity wasn’t working, and we instructed them to switch to the second activity: telling stories or making collages (depending on the study). For half of those in each scenario, we said that we were paying people in the second activity or (for the little kids) giving them a reward.

As expected, people who chose to do an activity after being promised a reward for doing it showed the lowest level of creativity. But, to our surprise, we found that those who had no choice but still expected a reward showed the highest creativity. They were significantly more creative than people who worked without expecting a reward.

This revealed that rewards can—under some conditions—enhance our intrinsic motivation and creativity. Rewards that we focus on as the reason for doing a task hurt our creativity. But unexpected or unchosen bonuses and rewards may boost it, especially if they support our engagement in something we’re already quite intrinsically motivated to do. At work, for example, an R&D manager who rewards a great team effort with additional resources to do the next project that the team is excited about will likely boost both the team’s intrinsic motivation and their future creativity.

And that’s exactly what we did in a 1989 study. We gave half the children in this study “intrinsic motivation training”—where they watched videos of other children talking about their love for the schoolwork they were doing, and how rewards, such as good grades, were a kind of bonus to what they were learning (but not the most important thing). Children who heard this message seemed to adopt this attitude toward reward; in a subsequent experiment, the promise of reward didn’t dampen their creativity. In fact, they were more creative when expecting a reward. Children in the control group, who had watched a neutral video, showed the usual creativity-killing effect of reward.

Creativity in the workplace

After studying creativity in the laboratory, I started to investigate how social factors influence people’s motivation and creativity in organizations.

In a 1996 study, we asked R&D employees at a large high-tech company (who were developing new products) to fill out surveys about their work environments. Later, managers at the companies rated each of their projects on creativity. We found that the work environments of the most creative projects differed significantly from the least creative.

High-creativity projects tended to have environments that were more intellectually challenging and offered sufficient resources, greater degrees of freedom, and much encouragement of innovative thinking, as opposed to harsh evaluation of new ideas—all aspects that support intrinsic motivation. Creativity-promoting environments also included work groups that were supportive, trusting, and receptive to new ideas, but also willing to constructively challenge each other’s ideas.

Support from supervisors also appeared to be crucial. The most creative projects were done under supervisors who fostered clear, honest communication, valued individual contributions to team projects, and set clear goals. And organizational supports, such as a free flow of ideas within the organization and mechanisms for developing new ideas, were also important for high creativity.

In later research, we drilled down to an even more detailed level, to examine what people say and do at work every day—as coworkers, team leaders, and organizational leaders—that can contribute to these positive (or negative) environments and influence employees’ intrinsic motivation and creativity. Our large study collected daily electronic diaries from nearly 240 professionals, working on 26 creative projects, who reported on their emotions, their perceptions of their work environment, and their motivation—as well as one notable event from the day—every day throughout their projects.

What drove creativity? We found that, of all the positive events reported in the nearly 12,000 diaries we collected, the single most important event for generating positive emotions, favorable perceptions of the work environment, and strong intrinsic motivation was simply making progress in meaningful work—a sense of moving forward on something that matters. Moreover, on those days, and weeks, and months when people had this experience, they were not only more productive; they were more creative, too.

The lesson for managers is straightforward: Pay attention to what your subordinates need to make progress in their most important work, tell them why that work matters, and provide the progress supports—whether they might be clear goals, freedom in achieving those goals, sufficient resources and time, encouragement to learn from failure, or any one of a number of other ways to ease inevitable setbacks and keep people moving forward with strong intrinsic motivation.

Creativity is crucial for our organizations; it’s one of the elusive abilities that managers are desperately seeking in their employees so their companies can survive in today’s competitive marketplace. My research suggests that organizations would do well to remember that creativity isn’t simply about finding the right candidates; it’s also about setting up the right work environment to allow people’s motivation and creativity to thrive.