More than two million adults in the United States get divorced each year. For some, the separation is associated with lasting declines in mental health and a greater risk of physical ailments. But others are able to bounce back without suffering these long-term problems. Why do some heal better than others?

A new study suggests that, for at least some people, the answer has to do with self-compassion. 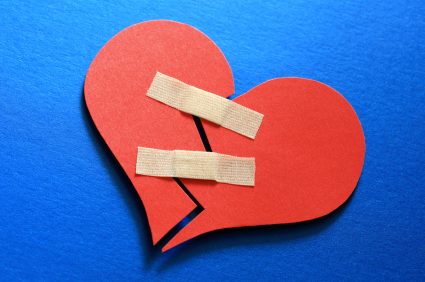 A growing body of research, pioneered by University of Texas psychologist Kristin Neff, has explored the nature—and the benefits—of self-compassion. According to Neff, self-compassion is a gentle understanding and accepting of our own flaws, while also recognizing that many others experience similar problems.

This stands in stark contrast to how people often respond when their marriage ends in divorce: They treat themselves harshly, often blaming themselves and obsessing over thoughts of regret and longing. A reaction like this greatly reduces their chances of physical and psychological well-being down the line.

In a forthcoming study, published in Psychological Science, researches examined whether divorcing couples would do better if they took a more self-compassionate approach.

The researchers, based at the University of Arizona, recorded 105 divorced adults for four minutes as they spoke about their relationship history and divorce. Trained coders then scrutinized each person’s choice of words, rating their level of self-compassion.

“People who are high in [self-compassion] tend to experience distressing affect without becoming overwhelmed or ‘stuck’ in their experiences,” the researches write. “They view themselves and their actions empathetically, and are able to see both the highs and the lows of life as part of the human experience.”

In other words, self-compassionate people still feel the pain of their separation in real ways, but they avoid thinking too negatively and wallowing in isolation or loneliness.

Since the incidence of divorce in the U.S is so high, understanding the keys to a resilient divorce can help millions of adults lead happier, healthier lives. It may not fix everything, but this study at least suggests that the process of self-compassion—of working to accept our imperfections and see them as ties that bind us to the rest of humanity—may be an important step in the right direction.

“To the extent that these processes induce positive mood states,” write the researchers, “divorcing adults may find opportunities to grow and even flourish from the experiences surrounding the end of their marriages.”

I very much agree with this, having been through a divorce myself. I experienced rage, despair and self-condemnation like I had never experienced before…But because I’d trained as a person-centred counsellor (lots of work on personal development and self-acceptance), I was able to be accepting of my emotions and my imperfections. I passed through the extreme emotions very quickly and soon began to see the present and the future in a very positive light.

Having worked with people going through similar experiences, I know that some people find it anything but plain-sailing. It has been difficult (but not impossible) for them to find self-compassion in a crisis if they haven’t experienced positive attitudes toward themselves before.

I guess this points to the benefits of developing an attitude of realistic self-compassion early in life, hopefully before crisis strikes.