Medical professionals are burdened daily with the pain and suffering of patients. Many work long hours, and regularly face stressful situations. This burden does not come without consequence: 60 percent of physicians report having experienced burnout at some point in their careers.

Mindfulness courses designed to help health care workers cope have been effective in reducing job-related stress and burnout, but require a 30-to-60 hour time commitment of learning skills like staying in the moment and non-judgmental awareness of thoughts and feelings.

What happens when we add this program to a health care workers’ intense workload? Counterproductively, stress increases, and many decide to drop the course; a mindfulness course that aims to reduce stress becomes an additional time burden.

To tackle this problem, two recent studies have investigated the effectiveness of abbreviated mindfulness-based courses for health care workers. The results say that mindfulness brings many benefits to doctors, nurses, and other medical professionals—but only up to a point.

The limits of mindfulness

In a study published in the Journal of Pediatric Oncology Nursing, Karen Moody and her colleagues studied nurses, social workers, physicians, and psychologists caring for children with cancer in both the United States and at a hospital in Israel. They spent eight weeks learning about and practicing mindfulness, for a total of 12 hours.

According to questionnaires that the researchers administered before the start of the course and following its completion, the intervention did not significantly reduce the staff members’ level of burnout, stress, and depression.

However, analysis of journals that the caregivers kept throughout the course suggested that the intervention did have positive effects.

In the journals, staff members wrote about how the mindfulness course lead to increased inner peace, and decreased stress and anxiety; because of the tools staff members learned in the mindfulness course, they were better ability to relax their mind, and let go of negative thoughts. They also felt better able to handle stressful situations, such as giving diagnoses to patients and their families.

The staff also wrote about having an increased awareness of their thoughts and actions, which enabled them to be more efficient in their work, focus and make goals. This awareness also helped them to feel good about their work, as they were able to review their behavior at the end of the day, and appreciate the effect of their work.

What’s more, the staff wrote of being more accepting and understanding of their patients, which made it easier to connect with them in a meaningful way. Finally, journal entries suggested that the mindfulness course fostered support from colleagues at work, as colleagues would discuss the material and sometimes practice mindfulness exercises together.

So if the journals pointed to so many benefits of the mindfulness training, why didn’t the researchers see changes in scores on burnout, stress, and depression?

Also, though this eight-week course required a smaller time commitment than previous forms of the intervention, some staff members wrote in their journals that the time commitment of the class was still a burden, which may have hindered them from reaping the full benefits of the course.

In a similar modification of Jon Kabat-Zinn’s Mindfulness-Based Stress Reduction course, Luke Fortney and his colleagues in Madison, Wisconsin designed an 18-hour intervention that took one weekend and two short followup sessions to complete—but would (they hoped) have the same positive effect as an eight-week intervention.

Thirty primary care clinicians at the University of Madison Wisconsin joined the program. During the immersive weekend and followup sessions, the clinicians learned mindfulness practices and how they could be applied to practicing medicine and everyday life. They also completed surveys that measured their level of burnout, depression, anxiety, and stress right before and right after they completed the course,  and then two more times: eight weeks and, again, nine months later.

The results, published in the Annals of Family Medicine, show that the clinicians were significantly less burned out, depressed, anxious and stressed after they participated in the mindfulness training than the day before they started it. This result was the same eight weeks and nine months later. In short, this time, the shorter version of the mindfulness training worked—and the positive effects lasted.

What can we learn? 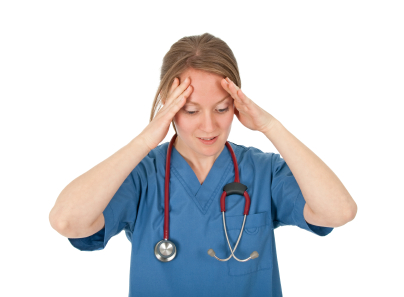 The difference may lie in the relative intensity and conditions of the medical work undertaken by the two groups studied. People who work with dying children, as do the pediatric oncologists in the first study, may need something more than a reduced time commitment. For instance, in addition to addressing personal coping skills, Karen Moody and her colleagues think interventions should address environmental factors that contribute to stress, such as understaffing. They also think that a workplace environment could be improved by incorporating a “relaxation station” at work, where staff members could take a moment to lounge in a massage chair or listen to a guided meditation.

Both studies also mentioned that the peer interaction inherent to the group format of the mindfulness course significantly contributed to the reduction in stress in burnout. In other words, it might not be enough to just learn the mindfulness skills on one’s own; social support matters.

From these studies, we learn that an abbreviated mindfulness course to reduce stress and burnout in health care workers

While these initial studies investigating time efficient mindfulness interventions for health care workers are promising, additional studies are needed to confirm the results—and also investigate the impact of factors like workload and the different levels of suffering they encounter.