The statistics are bleak: On average, only nine percent of us ultimately accomplish our goals for the new year. 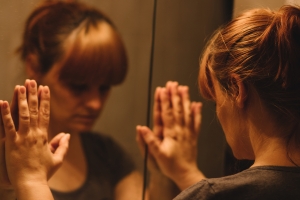 What can you do to become one of those people?

Maintaining our motivation over the span of an entire year requires preserving a belief in our ability to succeed and sustaining positive emotional experiences. Unfortunately, high standards can make us feel bad when we don’t meet them. Depending on our mindset, minor setbacks may make us abandon our goals altogether. For example, dieters are more likely to overeat after sneaking some ice cream than those who never had the goal of dieting in the first place. The same effect has been found on those who feel they have consumed too much alcohol.

While many of us instinctively beat ourselves up for failing to meet our goals, there is an alternative: self-compassion. This refers to treating oneself with kindness when things go wrong—and that’s what I aim to practice as I work on my own New Year’s resolutions: spend less money, drink less alcohol, and write more often. But could this approach backfire? After all, if I’m accepting of myself, why would I put in the effort to change?

In fact, research shows that when people treat themselves kindly, rather than critically, they are more likely to believe they can improve, correct mistakes, and re-engage with goals after veering off course. In contrast, self-criticism is linked to procrastination, stress, and rumination—none of which motivates people to continue pursuing a goal.

Researchers think self-compassion facilitates goal pursuit by helping us regulate our emotions and maintain our belief in our ability to change. When we practice self-compassion in the face of failure—such as drinking or eating more than we planned—we recognize the common humanity in our actions, treat ourselves with kind words and gestures, and are mindfully aware of our thoughts and emotions, rather than avoiding or exaggerating them. Self-soothing may transform negative emotions and self-related thoughts into the positive emotions that facilitate goal pursuit. In other words, when we cope with difficulty self-compassionately, we don’t need to cope by engaging in unhealthy behaviors, like drinking even more alcohol or eating even more junk food to manage our feelings of guilt.

Self-compassion may also facilitate our goal pursuit by promoting a growth-oriented attitude and belief in our ability to change. For example, self-compassion is linked to perceived competence and self-efficacy, or belief that we can achieve our goals. In a study by Juliana Breines and Serena Chen, undergraduates took a difficult GRE vocabulary test, were given their scores and the correct answers, and were allowed as much time as they wanted to study. Those who were primed to feel self-compassion by being told “everyone has difficulty” and to not be too hard on themselves spent significantly more time studying than those primed to maintain a high sense of self-esteem. Importantly, time spent studying was related to performance on the second test, implying that self-compassion may help us develop a skill by motivating us to spend more time practicing it.

These studies suggest increasing our self-compassion levels may help us achieve our goals by helping us regulate our emotions and by promoting a belief in our ability to change our behaviors. By providing a consistent feeling of self-worth, self-compassion creates a foundation on which to see ourselves clearly, cope with negative emotions in healthy ways, and reduce self-criticism.

How to apply self-compassion

To increase confidence in my ability to drink less, I plan to make a specific, measureable goal that clearly defines what I need to do: “I will only consume a total of four drinks each week on the weekend.” I also need to pay attention to the positive emotions I experience while pursuing this goal, because we’re more likely to pursue a goal that makes us feel good. Self-compassion is handy for keeping those positive emotions going when I have five, not four, drinks on the weekend.

Luckily, you can raise self-compassion levels through daily practice.

I plan to spend some time each day cultivating the elements of self-compassion, including mindfulness, self-kindness, and common humanity. Greater Good in Action has a variety of practices, such as letter-writing activities, which can help cultivate a feeling of warmth towards the self. Specifically, cultivating mindfulness may also help us delay gratification in service of our long-term goals.

In moments of difficulty, I plan to take a self-compassion break. If I’m tempted to drink during the week, I might cultivate self-kindness by placing a hand on my heart and saying, “May I be healthy” or “May I act wisely”; mindfulness by saying, “I’m having an urge to drink” or “I’m feeling stressed”; and common humanity by saying, “This is what it’s like to struggle with a goal” or “Other people have felt this way, too.”

Habits can be difficult to change, but research suggests that when we backtrack on our goals, we’re more likely to bounce back if we’re kind rather than critical of ourselves. That is certainly a much healthier response than to reach for a glass of wine or eat too much chocolate!