A word to Valentine’s Day marketers: If you want to reach spouses who are head-over-heels in love with their partner, don’t just target people in the throes of a new relationships. Older couples might be just as passionate—and researchers have the brain scans to prove it.

Looking at the brains of long-married couples, a new study suggests that the intense romantic love we feel at the start of a relationship can last for decades. What’s more, the study, published in the journal Social Cognitive and Affective Neuroscience, suggests that long-term romantic love may be even stronger than a new romance, aided by feelings of deep companionship that develop over time—an attachment that shares neural circuitry with parent-infant bonds, and that lacks the obsessive quality common to the early stages of romantic relationships. 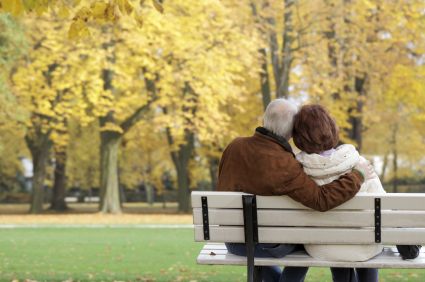 Using an fMRI machine, researchers examined the brain activity of people married an average of 21 years who still claimed to be “madly in love” with their spouse. While their brains were being scanned, the participants looked at photos of four different people: their spouse, a close friend, an acquaintance with whom the person was very familiar and had known for roughly as long as they’d known their partner, and an acquaintance with whom they were less familiar. After seeing each photo, the participants reported how intensely they felt emotions such as compassion, friendship, love, passion, and sexual desire.

When participants were looking at their spouse’s photo, they reported feeling significantly more love, passion, and sexual desire than when they were looking at the other photos. And sure enough, their brains lit up more in regions associated with reward and motivation—the same activity that has been observed in the brains of people in a new romance. The more love the participants reported feeling toward their spouse, the stronger the activity in this reward-processing network of their brain. These reward regions are where the brain processes the chemical dopamine, which is released during pleasurable experiences such as sex, drugs, and food.

The researchers speculate that these areas of the brain light up because people in love are willing to expend an effort to make their partner happy, strengthening their bond and making it more pleasurable. They also suggest that when couples engage in new and exciting activities together, they experience the reward of accomplishing and growing as a team, and grow more deeply in love as well.

What set the brains of those in a long-term relationship apart from the newbies was that they also showed heightened activity in regions associated with feeling safe and less stress—activity that’s also been observed in the brains of mothers when they think about their children. This activity is associated with strong feelings of bonding and close attachment; the authors describe it as feelings of “liking” someone and not just “wanting” them.

Previous studies have found that people newly in love show symptoms of obsessive behavior, including in their brain activity. But in this study, the long-term lovers show the opposite patterns, with more activity in brain regions that help reduce anxiety and pain; these areas are targeted in treatments of obsessive-compulsive disorder and depression.

“One key distinction between romantic love in its early and later stages,” the authors write, “is greater calm associated with the latter.”