As Valentine’s Day approaches, people are especially eager to connect with the perfect partner—and hold onto him or her for good. This is nothing new; mankind has searched for aphrodisiacs for centuries. The ancient Romans slurped down oysters, the Chinese swore by shark fin soup, and the Arabs were keen on camel’s hump.
`
But for modern romantics, science has some encouraging news: Our body equips us with some natural and powerful aphrodisiacs, along with the tools to make romance last.

Humans have evolved three different brain systems to encourage mating: sex drive (lust), feelings of attachment (trust), and romance (being in love). Each of these systems plays a role in desire, and scientists are now beginning to pinpoint the bodily chemicals that trigger each. 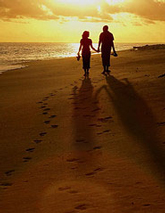 Lust. Sex drive is associated with a class of hormones called androgens, particularly testosterone (yes, women produce it, too). Today women with low libido can get a prescription for testosterone, even though it’s FDA approved only for use in men. But women can also increase their levels without medication. Playing competitive sports has been shown to trigger testosterone production; in fact, women get a bigger boost than men during a competition. Making love can also create the same effect. Studies have shown that sex raises testosterone levels, so the more sex you have, the more sex you desire.

Trust. Feelings of trust and attachment are fostered by the chemical oxytocin. In a study conducted at the University of Zurich, couples who used a nasal spray containing oxytocin before discussing an ongoing marital conflict were more likely to engage in friendly, positive communication than those who didn’t take a whiff. You can stimulate oxytocin naturally with touch. Hold hands while you watch TV, trade massages, or sleep in each other’s arms.

Love. The third chemical that drives relationships is dopamine, a key player in the brain’s reward regions that’s been found to promote romantic love. Research shows that novelty—taking risks or trying something new—can trigger the release of dopamine in the brain. I’m not just talking about novelty in the bedroom (although that would be a good start). You can get the same effect from sampling a new type of cuisine together or riding the roller coaster at an amusement park.

Clearly, we are born to love, with those feelings of elation that we call romantic love deeply embedded in our brains. But can those feelings last? Or does our body’s love chemistry wear down over time?

This was what my colleagues and I set out to discover in 2007. Led by neuroscientist Bianca Acevedo, our team searched for people who said they were still wild about their longtime spouse. Eventually we scanned the brains of 17 such people as they looked at a photograph of their sweetheart. Most were in their 50s and married an average of 21 years.

The results were astonishing. Psychologists maintain that the dizzying feeling of intense romantic love lasts only about 18 months to—at best—three years. Yet the brains of these middle-aged men and women showed much the same activity as those of young lovers, individuals who had been intensely in love an average of only seven months. Indeed, there was just one important difference between the two groups: Among the older lovers, brain regions associated with anxiety were no longer active; instead, there was activity in the areas associated with calmness.

We are told that happy marriages are based on good communication, shared values, a sturdy support system of friends and relatives, happy, stable childhoods, fair quarrelling, and dogged determination. But in a survey of 470 studies on compatibility, psychologist Marcel Zentner, of the University of Geneva, found no particular combination of personality traits that leads to sustained romance—with one exception: the ability to sustain your “positive illusions.” Men and women who continue to maintain that their partner is attractive, funny, kind, and ideal for them in just about every way remain content with each other.

I’ve seen this phenomenon, known as “love blindness,” in a friend of mine. I knew him and his wife-to-be while we were all in college, when they both were slim, fit, energetic, and curious: a vibrant couple. Today both are overweight couch potatoes. Yet he still tells me she hasn’t changed a bit.

Perhaps this form of self-deception is another gift from nature, enabling us to triumph over the rough spots and the changes in our relationships. I’m not suggesting you should overlook an abusive husband or put up with a deadbeat bore. But with Valentine’s Day upon us, it’s worth celebrating one of nature’s best-kept secrets: Our human capacity to love… and love… and love.