For the past five years, I haven’t lived anywhere for more than six months. I spent 28 days in Lisbon, three months in Bali, and a random half-year in downtown Las Vegas. With just two suitcases in tow, I was lucky enough to scuba-dive in Thailand, explore the ruins of Pompeii, and do karaoke with a Korean movie star.

According to Melody Warnick, author of the new book This Is Where You Belong, that makes me a Mover with a capital M. And I have plenty of company: These days, the average American moves nearly 12 times in their lifetime, and 12 percent of Americans move in a given year. 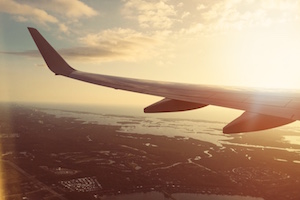 But moving continuously has its downsides, according to Warnick. Research shows that people who like their hometown and their neighbors are less anxious and have higher well-being. They’re less likely to experience physical ailments, heart attacks, or stroke; and they even live longer. And one survey found that the happier residents are with their town, the more economically prosperous it is.

Warnick was once a Mover, but eventually chose to settle down in Blacksburg, Virginia. Her book chronicles her journey toward “place attachment,” a series of research-backed experiments and practices designed to make her love where she lives. Many of these practices—from eating local to organizing collective art projects—come down to community, belonging, and social connection. These are what truly make us love where we live, which also means that we can learn to love nearly any place (or at least like it a little more).

“More than anything else, relationships with people are what make you feel at home in your town,” Warnick writes. “So many of my Love Where You Live experiments had worked because they managed to make me like people in Blacksburg.”

For example, Warnick made a commitment to buy and eat local, and she found herself joining a community-supported agriculture group, shopping at stores she had never before set foot in, and going to the farmers market. Compared to a grocery store, it turns out, people are three times more likely to visit farmers markets with someone else, and have ten times the conversations with sellers once they get there. Plus, local mom-and-pop shops are known for friendlier customer service, writes Warnick; she had a bit of a revelation when she bought a t-shirt at a Blacksburg skateboard shop during a “cash mob,” and the owner thanked her warmly.

“That moment was when it clicked for me that this store was owned by an actual human being,” she writes. “I understood…how what I buy affects my local community.”

Neighborliness may be on the decline—these days, 28 percent of Americans don’t know any of their neighbors by name—but that doesn’t mean it’s any less crucial to keeping us rooted. People who have the strongest social connections nearby (six extended family members within a half-hour drive) are the most satisfied and least restless group, Warnick writes. One Danish study found that a company trying to convince a potential employee to move to a new city would have to pay them an extra $12,500 if they lived next door to their sister. Good relationships with neighbors can be the pull that makes us stay, even when our town doesn’t boast the best restaurants or the cheapest rents.

Place-attached Stayers—the opposite of Movers—are more likely to volunteer, another practice that’s inherently social. Volunteering can make residents feel part of the local “we,” Warnick explains. Joining a giving circle, where groups of people combine their funds and collectively select a charity recipient, is a fast track to community engagement for newcomers and renters.

Even creative projects, another practice Warnick recommends for boosting place attachment, can build relationships. We don’t learn to love where we live by sitting in our apartment and painting the beautiful skyline; we do it by setting up art classes for teens or (in Warnick’s case) organizing a sidewalk chalk event. A place is its people; even enjoying gourmet restaurants and sprawling parks brings us into contact with others. 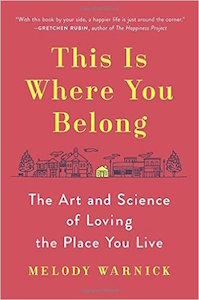 Warnick’s book helps clarify what I’d missed by living out of a suitcase. Though I feel incredibly fortunate for having had the opportunity to travel so much, moving continuously has made it hard to find that sense of community. When you’re living somewhere for months at a time, the effort it takes to form friendships is almost not worth it—particularly if you’re an introvert like me, who would happily skip the getting-to-know-you part of a relationship and land safely in the comfort of intimacy and deep conversation. After five years of this, I am just a bit lonely.

That’s partly why I, like Warnick, am settling down. I can still travel, and will, but I now realize how important it is to have a place and a community. Inspired by her book, I valiantly try to chat with people in the elevator instead of standing mutely; I felt a surge of gratitude for the perfect indie coffee shop I discovered, just steps from my apartment; and I hope to convince my partner to come see a Blue Jays game—one of Toronto’s quintessential communal experiences—even though we are baseball-indifferent. I’m aware now that if I want Toronto to be my home, I have to make it so, through a spirit of exploration, appreciation, and openness.

Some might think I’m crazy to give up jet setting, but to me the choice is clear: I want to belong.