Jamil Zaki’s parents began splitting up when he was eight years old. As they grew apart, he started to feel like he was going to have to pick a side. 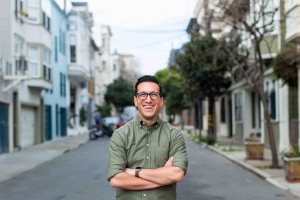 His Peruvian mother had one set of priorities, values, and fears, and then he’d head over to his Pakistani father’s house and everything would be turned upside down. So, he was forced to try to understand both of their perspectives and hold two different versions of the world in his mind, a challenge that ended up defining his childhood. To him, it felt like tuning his mental radio to different frequencies, and he got good at it. Later, he would learn to call this empathy.

Now, over 30 years later, Zaki says that empathy is the most important skill he has. It’s also been the focus of his research as a Stanford University psychologist for the past decade—work that he brought together in his new book, The War for Kindness: Building Empathy in a Fractured World. The book appears at a challenging time.

“It’s been hard being an empathy scientist recently,” Zaki admits.

On one hand, he knows just how powerful empathy can be in our society: Empathic people tend to have stronger relationships, help others in need, and be less prejudiced.

At the same time, he sees so many people turning away from empathy in favor of blaming, dehumanizing, and ignoring the needs of others. That trend seems particularly pronounced given the intense political polarization and civil crisis around racism that are straining families and communities in the U.S.

Even Zaki finds himself getting sucked into polarized politics sometimes. “The war for kindness” rages inside his own head, just as it did during his parents’ divorce.

But empathy and kindness aren’t things you have or you don’t, Zaki believes (and his research is finding). They are skills that take time and effort to develop.

The practice of empathy

“When I go on Twitter, I’m just as mad as everybody else. I feel schadenfreude,” Zaki says. “I want people who are enacting policies that I think are harmful to lose and to be upset and to be unhappy.”

At one point, his anger was directed at an old friend on the other side of the political spectrum; they sniped at each other online and then started arguing through text messages, too. Eventually, Zaki called a timeout and got on the phone with his friend to talk it out—a way of practicing what he preaches.

The goal of that conversation, of course, was not for them to come to some happy political agreement. Instead, Zaki hoped to understand his friend better—to avoid the temptation to judge him as a bad person and get curious about the life experiences that led to his point of view.

The conversation wasn’t perfect, Zaki admits, and no one changed their mind. But he did learn his friend’s story: the feelings of alienation, hurt, and abandonment that bubbled up as he saw American culture changing and (from his perspective) leaving him behind.

We can’t all expect to achieve this level of connection and understanding all the time, of course. But that doesn’t mean we should give up on it entirely.

Zaki’s research suggests that empathy isn’t a fixed trait but something we can build by putting ourselves in situations where we hear others’ thoughts and feelings, and then pay close attention. When someone is suffering, we can resist the urge we sometimes have to conclude that it’s not a big deal, they brought it upon themselves, or they deserve it.

“The message of my work and other people’s work in the field is not that empathy is easy or that it’s supposed to be easy, or that if you feel a moment of anger, even hatred, or disconnection that that makes you a bad person,” Zaki says.

“The message is that this is an ongoing project that all of us are taking part in to decide and shape who we want to be.”

What Zaki did with his old friend—talking about the feelings and life experiences behind your point of view—is one of many practices that he teaches in a class at Stanford called “Becoming Kinder.” Every week, students in the small seminar are assigned a different exercise for homework and report back with the results.

For example, one practice asks students to “spend kindly,” giving their time or money to others rather than using it for themselves. It’s a tall order for busy Stanford freshmen, who already feel overloaded by all the academic demands of college. But that’s the funny thing about giving away time: It actually makes our lives feel more abundant.

That’s what happened for one student when he gave up his time to support a friend, who was afraid she would have no audience for her one-woman show. He put his studying aside for the night and attended her performance—a kindness that he wouldn’t have thought to do had it not been for Zaki’s class.

In another homework challenge, Zaki invites students to take in some art, music, or literature that can broaden their perspective on the world. During the first semester, for example, one student read a science fiction book about a woman and her clone, which ended up giving her insights about her sister. Their relationship had been characterized by resentment on both sides: the student (who suffered from frequent illness) resenting her sister’s good health, and her sister resenting her for getting all the attention. Eventually, the sisters were able to acknowledge their mutual jealousy and change the dynamic of their relationship.

Throughout the semester, students also learn to use technology in supportive ways, champion kind behavior in their groups and communities, and turn kindness inward toward their own struggles.

According to Zaki, these challenges are meant to push students beyond their comfort zone and help them connect with people in ways they might never have.

Hope for the future

Students often get nervous about their empathy homework, Zaki says—but he’s been moved by the results. 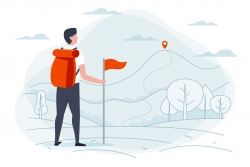 For one thing, it’s fulfilling for him to see his research on empathy and kindness touching real people’s lives, something that not all academics get the chance to experience. The class is also busting stereotypes that society has about generation Z, today’s supposedly narcissistic, tech-obsessed teens and young adults.

“These students were so thoughtful and really inspiring that it gave me hope for the future,” he says.

In today’s troubled times, Zaki still sees the beautiful side of human nature and believes good things will come if we do the work of trying to get to know each other better. Because of his research, he receives hundreds of emails from people who want to build a kinder world but feel hopeless and outnumbered—and every email brings him a little more hope.

“When you write about stuff like empathy, you hear from so many wonderful people who care about this,” he says. “I’m always like, ‘Can I put you all in a group chat? There’s a lot of you, you know.”