Around the world, religious bigotry is on the rise. 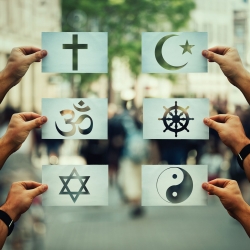 In a number of European Union countries, rising Muslim migration seems to be driving support for anti-Muslim political parties. This has also been true, to a lesser extent, in the United States. On both sides of the Atlantic, open anti-Semitism appears to be increasing.

Is religious diversity too politically difficult and socially disruptive, as many argue? Perhaps, the argument goes, the stability and social peace of these countries is maintained by their relative ethnic and religious homogeneity—and that this fragile balance can’t withstand the diversity that the newest wave of migrants is introducing.

But new research published over the summer provides some reason to think that humans may not be as averse to diversity as we think, at least not over time.

A team of researchers used 22 years of data, drawn from over 100 countries, to look at how people react to growing social diversity in their societies. According to Douglas Massey, a Yale psychologist who coauthored the study, they chose to study religious diversity in particular because they had access to more reliable data in that area.

“Around the world, religion is measured pretty much the same way, but race and ethnicity and other kinds of nationalistic diversity get measured in very different ways,” Massey says. “It’s hard to standardize.” In addition to the fact that religious diversity is easier to measure across national borders, religious conflict has very deep roots and historical importance. “Lot of wars fought, people killed on the basis of religion,” he adds.

Massey and his team drew data from the World Values Survey, the European Social Survey, and the Latinobarómetro, focusing on how people around the world reacted to increased diversity in their societies. They found that, at first, diversity does indeed tend to cause problems.

“In the short run, when diversity suddenly increases very rapidly, there is a loss of trust,” says Massey. “People don’t know anything about the new people in society. They haven’t had any experience with them, they haven’t had any contact with them.”

Over time, however, things start to shift. “We’re talking about ten, twelve years, maybe,” says Massey. “People come into contact with the newcomers and they come to appreciate them as human beings rather than a category of strangers. And this mitigates the initial effect.” When societies reach that point, “you get the benefit of diversity, but you don’t get the hostility, divisiveness, and the lack of trust in the longer run.”

What this research suggests is that increasing religious diversity presents real challenges for a society, and does indeed come with short-term lack of trust. But over time, as there is greater communication and dialogue between different groups, those negative effects fall while the positive ones rise.

What’s important to remember is that while it appears that societies tend to accept diversity over time, that does not mean that the process simply happens on auto-pilot. The outcomes are heavily dependent on social leadership.

“This lack of trust gets overcome through contact, on an equal-status basis with common goals,” Massey explained, citing classic intergroup contact theory. He continues:

To the extent that societies can arrange the social structure of their nations and their societies to bring about these sorts of things, then this will improve and speed up the process. To the extent that societies don’t do these things or do the opposite—frame the outsiders as scary, and isolate and exclude them—then the processes don’t happen. It’s not automatic that there will be a lack of trust or no trust. A lot of it depends on what the leaders in any given society do with the diversity that they’ve got.

Civil society organizations are often at the forefront of providing the leadership necessary to bridge differences and increase religious tolerance. They do this through a variety of mechanisms, including promoting positive contact between people from different communities.

In the San Francisco Bay Area, the nonprofit GLIDE Foundation offers services to the homeless and other marginalized populations. Although the organization has a religious bent, having been founded by Methodist philanthropists, it has organized people of many faith backgrounds to build bridges between communities.

Rabbi Michael Lezak serves as the rabbi for GLIDE’s Center for Social Justice. Every Friday, he brings many communities together to bake 160 loaves of challah bread, typically eaten on Shabbat. He says the gathering includes “Jews and Christians and Muslims and atheists,” all using a Jewish tradition to bring a diverse group together for common goals.

GLIDE’s pastor emeritus is the Reverend Cecil Williams, a spiritual leader who once took the radical step of removing the cross from the wall because he wanted people of all faith backgrounds to be able to pray there.

“We have two Sunday celebrations,” Lezak explains. “You have anywhere between 400 to 800 people coming to each Sunday celebration. You have the full spectrum of humanity in that room. Of believers and non-believers—Jews, Muslims, Christians, atheists. American-born…people here legally and not legally.”

It may seem radical, perhaps even impossible, elsewhere in the country to create the interfaith comity and sense of community that GLIDE has built. It would be easy to think it really is unique in its success.

But what Massey’s research shows is that virtually every place on the planet comes to accept religious diversity over time. “It tells a different kind of story than the one a lot of people are putting forward,” says Massey. The only question is how long it takes—and who will take on the work of making it happen.