Marjorie Taylor is a professor of psychology at the University of Oregon and an expert on imaginary friends. She read my August 27 post at the blog Daddy Dialectic on my son's imaginary characters, in which I describe how he adopts roles that range from Frank Lloyd Wright to Spider-Man to the Wicked Witch of the West.

"Mostly what your son is doing is not having an imaginary friend," she told me in an interview. "It's having a pretend identity. There's usually a gender difference there. Boys and girls are similar in that they create imaginary characters, but there is a gender difference in what they tend to do with those characters. So, the little boys tend to put on superhero capes and run around. They take on the characteristics of the character and act it out. Whereas little girls, at least during the preschool period, are more likely to invent this other person that they're interacting with. By the time they get to be about seven or eight, though, little boys are just as likely as little girls to have an imaginary friend rather than a pretend identity." 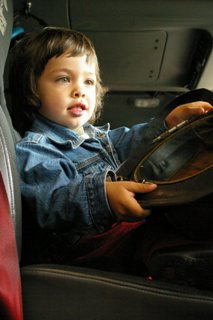 Taylor's research into imagination and pretend play is fascinating–and I found that it illuminated quite a lot about my son's behavior and propensities. Liko–who has imaginary friends as well as pretend identities–is a very sociable, verbal, empathic little boy who is prone to flights of elaborate fantasy. (Incidentally, in the photo above, Liko is pretending to be a fireman in a real-life fire engine.) In her research, Taylor has found a strong correlation between those qualities and the prevalence of imaginary companions.

Whatever triggers these qualities, it appears early in life. "Children who go on to develop imaginary friends really show an interest in fantasy from a very early age," she told me. "So even before the first year, they tend to be the kids who really like puppets and stuffed animals, rather than building blocks or things that are more reality-oriented. Those are the kids who go on at [a later age] to have imaginary friends."

One of the interesting implications of the gender difference Taylor found is that little boys appear to be more wrapped up in projecting themselves into roles of power, while girls from early on are developing characters outside themselves who demand attention and empathy. This plays to certain gender stereotypes, but her research also implies that boys and girls alike can develop empathy and caregiving behavior by developing their imaginations.

Once in place, it seems that imaginary friends can take on a life of their own, becoming characters with autonomous motivations and unique feelings. "Part of the fun of imaginary friends is that they don't always think like you do," said Taylor. "In fact, it surprised us at first that with a lot of imaginary friends, there is a lot of arguing going on and a lot of negativity, even. An imaginary friend will be mean, hit you on the head, put yogurt in your hair, and so on."

Does this mean that imaginary friends ought to all be all locked up in imaginary jails? Taylor says no. "Like adults who think things through before they act, this gives children an opportunity to play it through before they encounter the situation [in real life]. If something is bothering you, you can control it or manipulate it in the world of pretending. That's a way of developing emotional mastery. Pretend is something children have available to them, that is a coping mechanism they can use in their lives. And they don't have a lot of other ones, really. They're pretty helpless and small and have to depend on others, but they do have their imaginations, and they use them to cope."

Thus pretend play and imaginary characters are often a healthy sign of resilience and creativity. Taylor is routinely contacted by parents who are concerned about what the imaginary friends are doing, fearing that imaginary play might point to something wrong in real life. "We see lots of negativity and difficult stuff going on in the pretend play of kids who are healthy and doing just fine," says Taylor. "That can make parents uncomfortable."

But Taylor found that "children just like to think about being bad. Why not have an imaginary friend who is like that, to explore what it means to be bad? You have to think of it as exploring emotional space. There's a lot to think through about behavior. Kids use pretend to try it on, they do [bad things] in their pretend play so that they have some control over it."

One parent came to Taylor because her child's imaginary friend was always sick. "The child didn't want to leave home because she didn't want to leave the imaginary friend because [the friend] was so sick," said Taylor. "We put our heads together and thought about how to work within the pretend play. So we had the mother invent a new imaginary friend who could stay home with the sick one. And then the child was totally happy to go! Children like it when parents pretend along. Some people say, 'Well, the imaginary friend is a private thing that [the child doesn't] want to share.' But that's just not true. Kids love it when adults participate in their pretend worlds."

My daughter found her imaginary friend, Scary, when she was 2. She was quite scared of him and said he was coming to steal her legs. She is now 3 1/2, very bright and imaginative, and still talks about Scary. I’ve gotten a lot of negative reaction from teachers and famnily about Scary, but I tend to think it’s overblown. One teacher even suggested that the devil is trying to take my daughter’s soul.
Scary is part of our life and we take measures to keep him in check. I try to get my daughter to put him in time out herself–so she has a sense of control–but she often asks me to make him go away. We recently moved and “left” him at the old house, which partially works to alleviate some of her tensions about him. He can’t come get her legs because he can’t find her. But she still likes to talk about him. I don’t think they directly interact, but he is more of a character in her mind that exists whether she interacts with him or not.
——-