Over the weekend I showed my three-year-old daughter Caine’s Arcade, the 11-minute online video about a boy who creates arcade games out of cardboard boxes at his dad’s auto parts store in Los Angeles.

Riding to school this morning, I asked her if she liked it. 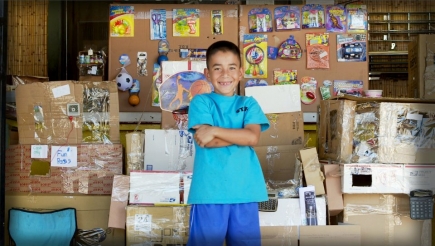 Caine Monroy, creator of the most famous cardboard arcade on the planet.

She’s not alone. Since filmmaker Nirvan Mullick posted his film about Caine’s arcade three weeks ago, it has been viewed more than five million times, attracting praise from Oprah and coverage from The New York Times.

The scholarship fund that Mullick launched on the Caine’s Arcade website is up to nearly $200,000—and the Goldhirsh Foundation has pledged to match these donations dollar-for-dollar. As my friend Andy Isaacson reported on The New Yorker’s culture blog last week, the video has inspired countless kids to undertake (and film) their own DIY creations, motivated the Exploratorium science museum to transport Caine’s arcade to San Francisco for an exhibit, and has even prompted grown men to post videos of themselves crying as they watch nine-year-old Caine show off his mini-basketball and soccer games, ticket machines, “fun passes,” and other homemade delights.

Watching Caine in action, it’s hard not to feel inspired by his creativity and enthusiasm. In the film, Mullick recounts how awestruck he was the first time he saw Caine crawl behind one of the cardboard games to push tickets out of a slit, just like the awards you get at a real arcade. “This kid’s a genius,” he says. Others seem to agree: M.I.T. has invited Caine to participate in a summer program, and a professor at UCLA has offered to customize an academic track for the kid.

Caine is clearly a very clever and creative kid. But I think viewers feel so moved by his story because he’s not so exceptional. Caine’s Arcade strikes a chord in us because we see in Caine the kind of unbridled imagination we had as children, but that too few of us—kids included—let loose these days.

Yet one of the many treats of Mullick’s film is that it shows the kinds of conditions that help kids unleash their creative potential, echoing some lessons we’ve covered in the past on Greater Good, including our recent “Eight Tips for Fostering Flow” and these tips for fostering creativity in kids. Here are three of the most important ones.

1. Give them lots of unstructured time. This time of year, many parents are sweating summer camp choices for their kids. But this is how Caine spent his last summer vacation: accompanying his dad to work every day at a used auto parts store in East Los Angeles.

Some parents might see this as negligent, even depressing. Caine saw it as an opportunity. With long summer days to fill, he set to work inventing his arcade and building it out of the cardboard boxes stacked up in the store’s storage room. As his dad worked in an office at the back, Caine let his imagination run wild, eventually taking over the front of the store with his growing collection of games. With no play dates or lessons scheduled for him, and no computer at his disposal, he had to find a way to keep himself entertained.

For families who can afford it, there are lots of nice things for kids to get out of summer camp—new friends, swimming lessons, kickball. But Caine’s Arcade illustrates what can happen when we give kids the time and space to nurture their creative whims.

2. Give them the resources they need for creativity. This doesn’t mean expensive toys or supplies—in fact, it’s often just the opposite. For Caine, the key was a reserve of cardboard boxes and some tools that might seem inappropriate or even dangerous for kids: packing tape, scissors, staplers, calculators, markers.

Caine came up with creative uses for these everyday office supplies—and his dad, to his infinite credit, let Caine liberate all of these supplies from their “adult” functions and repurpose them for his arcade.

3. Give them the support and encouragement for their creative projects (even if they seem kinda crazy). As you’ve probably surmised by now, the unsung hero of Caine’s Arcade is Caine’s father, George, who lets Caine act on his love of arcade games, even if it means co-opting the front of George’s store and potentially confusing some customers. When Caine wants to buy a claw machine for his arcade, George encourages him to build his own—then marvels at what the kid comes up with.

George’s affection and enthusiasm for Caine’s project undoubtedly helped it come to be. And this seems to be a trend: When George recalls early in the film how Caine likes to take apart his toys, he’s obviously pleased by his son’s curiosity, not annoyed by the mess it makes.

I hope that Caine continues to grow his arcade and (with George’s continued encouragement) launches many more cardboard adventures, and I hope the success of Caine’s Arcade opens up new doors for Caine and other kids like him. Yet I also hope that the message we take away from Caine’s Arcade isn’t just that there’s a talented and endearing kid hidden in East LA, but that there are ways we can encourage the Caine who might be living under our own roof.

I loved this story and think it is such an important
reminder to us to slow down and let the kids find
their way.  I fear that they won’t know how to learn
anything on their own anymore.  How can one
possibly learn art if they don’t have an “Art Class”?
For me, when my kid says he/she is bored… I find
that I now get excited to see what happens with that.
15 minutes of “boredom” inspires wonders!  I try to
let that occur, and not try to solve the problem.  Its
not a problem.  Its wonderful!

Thanks Karen. I love that line: “15 minutes of
‘boredom’ inspires wonders!” Words to live (and
parent) by!

I have enjoyed the Caine phenomenon as well.  What he has managed to do with his cardboard carnival is to literally unleash the innocence and craving for specialness that is buried inside today’s adults and children.  Caine’s commitment to his creation and his curiosity is so pure and lovely.  We are homeschoolers, so thankfully my kids do this kind of thing all day every day on top of many other out-of-the-box (excuse the pun) fabulous experiences.  Having never stepped foot inside a brick-and-mortar school, they identify very strongly with Caine.  More freedom for children and more support of their creativity is a recipe for happiness and success.

What a nice, bright and alert kid. I’m glad to see kids away from electronics and in a world where they need to use their imagination to escape boredom! One gripe: it’s kind of dismal to see a child’s swingset right by a road in the concrete jungle, and a sea of plastic. Kids today learn nothing about nature (in fact I don’t even know many adults who can name the native flowers (oops, I mean “weeds”) growing in their back yards. Kids shouldn’t have to grow up in this toxic environment.

What a great story and a great relief. Having a creative kid who is not influenced by computers, television, video games, etc makes for a socially “different” child in almost any town. It’s a relief to know that others are nurturing their child’s creativity and it’s nice to know my child has something in common with someone else’s child; imagination. What a breath of fresh air.

I watched the video and I cried! I was so impressed with Caine and his arcade. I was even more impressed with his will, determination and passion. I was equally impressed that Caine’s dad was willing to bring him to work and let him have free range to do what he wanted to do with all the cardboard. As parents, all of us can give our kids more room to express themselves, to “try on” their dreams, and to explore and discover. I hope this video inspires you and your family!!

Inspiring story. In an era when it’s easy to believe that creativity in children is being squashed by technology and television, Caine is a hero. Or maybe I should say George is (a hero). Too many parents take the easy way out and don’t think about the long term effects on their children. Caine’s Arcade should be mandatory viewing for all young parents.